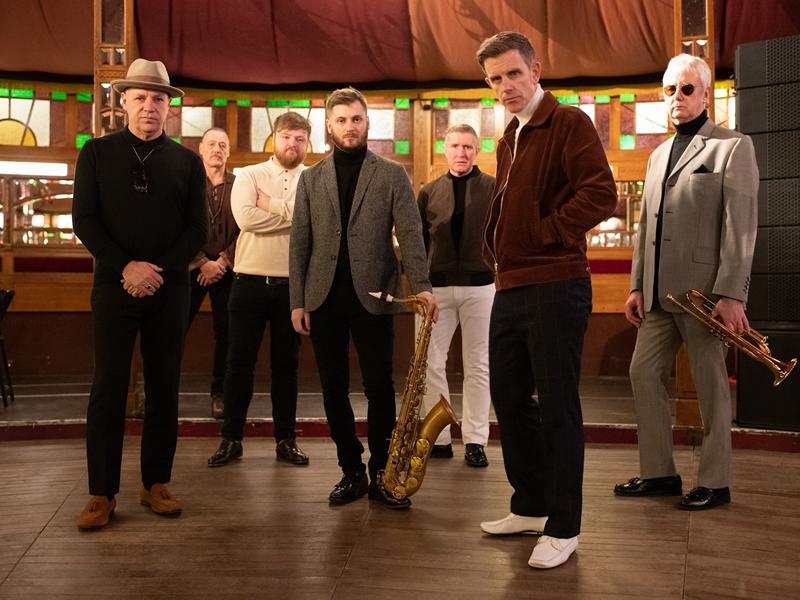 This show has been reschedules to Friday 25th June 2021.
All tickets purchased are valid for the rescheduled date or a refund can be requested by mailing events@baadglasgow.com

The seeds of British modern soul band Stone Foundation were sown in the early '90s. During this time, bass player Neil Sheasby and vocalist Neil Jones were playing in separate bands, and despite having both grown up in Warwickshire, England, they first met when their respective groups were on the same bill at a gig in London. Soon after their first meeting, both their bands split and the pair decided to try writing some music of their own.

Their early days saw them experimenting with sounds and an ever-revolving lineup. During this period they made three records: 2005's In Our Time, 2008's Small Town Soul, and 2010's Away from the Grain. But it was in 2011 that they got their first big break. John Bradbury, the drummer in ska band the Specials, caught Stone Foundation's live set at the Fiddler's Elbow pub in London, and invited them to support his band on a U.K. arena tour.

The year 2014 would also turn out to be significant in the band's history. Their record To Find the Spirit -- featuring guest vocals from Carleen Anderson and Nolan Porter -- entered the U.K. Top 75, and they were invited to tour Japan with the Visit Britain campaign, which led to a spot in the billing at the Fuji Rock Festival playing to a crowd of 4,000. Their 2015 follow-up record, A Life Unlimited, attracted yet more impressive guest spots, with Graham Parker making an appearance. Their continued success also caught the attention of Paul Weller. A fan of their song "Beverly," he produced and played on Stone Foundation's 2017 album Street Rituals."

While we take every opportunity to ensure the details for Stone Foundation - CANCELLED are accurate, we always advise that you contact the event organiser before setting out for the event to avoid disapointment. All information (whether in text or photographs) is given in good faith but should not be relied upon as being a statement of representation or fact.

Other Events at Barras Art And Design Centre

Listen up Buster, Get Ready for the UK's Number 1 Tribute to The Nutty Boys, live at BAaD on Friday 2nd July!
Read more

Martha Reeves & The Vandellas return to Glasgow for their annual concert of all the hits in the fitting musical East End Quarter in BAaD!
Read more

Annie Lennox and The Eurythmics Tribute

It's 30 years since 808 State made the opening salvos into what became UK Acid House & Techno, they're back with a new tour including a night at BAaD on October 22nd!
Read more

Join Susie McCabe & Des McLean as their Beer Garden Tour stops off at Van Winkle Glasgow on 20th May for a cracking night of comedy!
Read more

Janice Forsyth will be joined by stars of Outlander, Sam Heughan and Graham McTavish as they discuss their adventure of a lifetime exploring the majesty of Scotland as part of Aye Write 2021!

Disney and Pixar's 'Toy Story' will be presented live in concert for the first time in the UK in 2022 with a nationwide tour, catch it at the Glasgow Royal Concert Hall on 15th February!

Join Spin for a two hour pottery workshop and create at your own socially distanced table with staff on hand to help bring your vision to life!

Bergamotte's Pop-Up Jungle is coming to Box Hub Glasgow... with a selection of plants: hanging, exotic, graphic or prickly - there's something for everyone and for every budget!