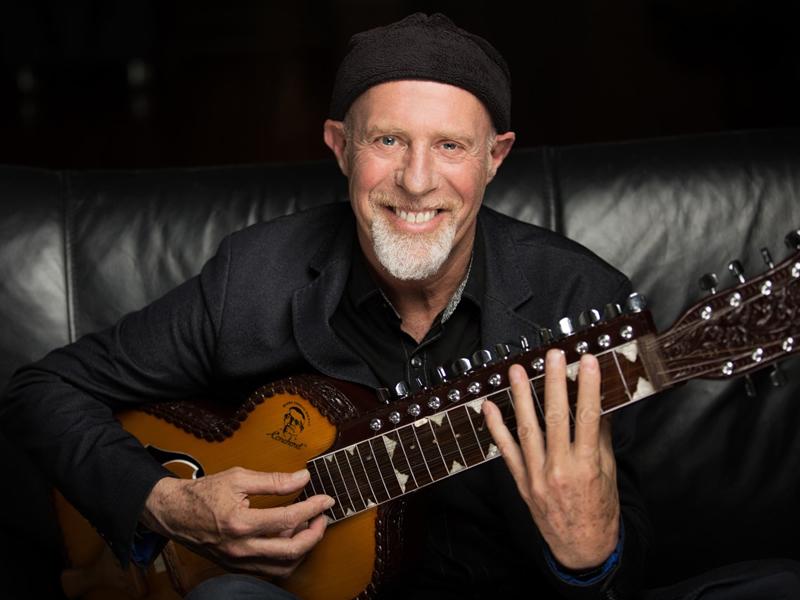 Harry Manx has been dubbed an “essential link” between the music of East and West, creating musical short stories that wed the tradition of the Blues with the depth of classical Indian ragas. His unique sound is bewitching and deliciously addictive to listen to.

Born on the Isle of Man, Manx spent his childhood in Canada and left in his teens to live in Europe, Japan, India and Brazil. He honed his hypnotic live show on street corners, in cafes, bars and at festivals. But it was Indian music that captured his attention and in the mid 80s he began a five-year tutelage with Rajasthani Indian musician Vishwa Mohan Bhatt (Grammy winner with Ry Cooder for

A Meeting by the River). Receiving the gift of Bhatt’s custom-made, self-designed Mohan Veena (a 20-stringed sitar/guitar hybrid) was the catalyst for Harry to forge a new path with his now signature east-meets-west style of music. While the mohan veena itself is beyond exotic, Manx uses it within traditional Western sound structures.

A successful touring performer, Manx has brought his “breathtaking” solo shows across Canada and into the USA, Australia, and Europe. He has appeared at many prestigious festivals, world-class theatres, concert halls and infamous Blues clubs around the globe. Playing the Mohan Veena, lap steel, harmonica, stomp box, and banjo, Manx quickly envelops the audience into what has been dubbed “the Harry Zone” with his warm vocals and the hauntingly beautiful melodies of his original songs.

It’s in the live setting, Manx says, that the bridge between “heavenly” India and “earthy” American blues is most effectively built. “Indian music moves inward,” he explains. “It’s traditionally used in religious ceremonies and meditation, because it puts you into this whole other place. But Western music has the ability to move out, into celebration and dance. So when we play the Indian stuff on stage, it has the tendency to draw people into something really deep; they’ll get kind of quiet and spacey. Then we’ll play some more Western music, and it grounds them once more, they sort of come out of the mood the Indian music had put them in and get into the performance. I love to see that working — that effect on the audience. My goal has always been to draw the audience as deep as possible into the music.”

Manx is a prolific artist, releasing nine albums in a eight-year span with no signs of stopping. He has received seven Maple Blues Awards and his mantel shelf also holds honours from the Canadian Folk Music Awards, Vancouver magazine Georgia Straight, and the South Australia Blues Society. He received CBC Radio’s Great Canadian Blues Awards for 2007 and his albums have garnered five Juno nominations.

Blend Indian folk melodies with slide guitar blues, add a sprinkle of gospel and some compelling grooves and you’ll get Manx’s unique “mysticssippi” flavour. It’s hard to resist, easy to digest and keeps audiences coming back for more.

Bill W and Dr Bob is the inspiring and often humorous story of the two men who pioneered Alcoholics Anonymous, and their supportive wives who founded Al Anon, catch it at Websters Theatre!
Read more

Heidi Talbot will be celebrating 20 years as a professional singer with a number of special concerts, featuring long-time collaborator Boo Hewerdine, including a night at Websters Theatre Glasgow!
Read more

This Is Where We Get Off

This Is Where We Get Off is a 'confident, hilarious play full of truth and heart' don't miss it when it comes to Websters Theatre Glasgow on April 21st!
Read more