Furnace and the Fundamentals

Furnace and the Fundamentals, the band described as 'humanity's most exhilarating dance party', are coming to Glasgow! Don't miss them at King Tuts on 17th June 2021! 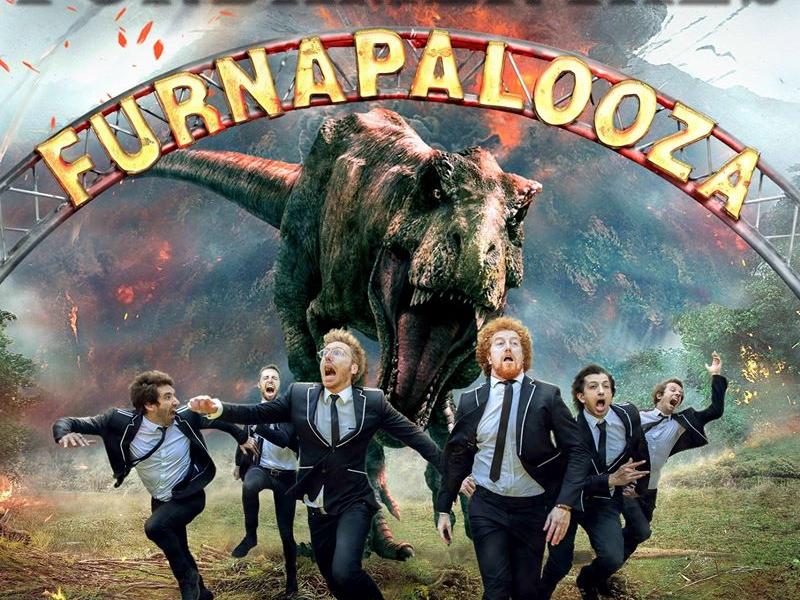 About Furnace and the Fundamentals

The six Sydney showmen with a penchant for party covers and over the top antics will deliver FURNAPALOOZA – an exhilarating, non-stop party set of the greatest songs of all time, accompanied by a mind-boggling, memory-triggering matrix of music footage on the big screen, light up suits, inflatables and more dance-floor anthems than you can count.

From Beyonce to The Beatles, Queen to Eminem, The Lion King to Dirty Dancing – tens of thousands of fans across the UK, Europe, Australia, Asia and New Zealand have seen Furnace and the Fundamentals earn their reputation as bona fide party legends, including show-stopping performances at Falls Festival, Lost Paradise, Edinburgh Fringe Festival, St Kilda Festival, the British Grand Prix, Perth & Adelaide Fringe Festivals, NYE in the Park, the Australian F1, NYE on Sydney Harbour and countless packed club shows.

The past 18 months have been trailblazing for the Sydney band – international festivals, numerous television and radio appearances, the release of their first Christmas record ‘A Very Furnace Christmas’ earning coverage on MTV UK, Triple M Australia & more. It’s been a non-stop ride for the Australian non-stop party band, with plenty more to come.

The group’s dazzling displays have a history of selling out – so get in quick and bring your dancing shoes – it’s Furnace time.

While we take every opportunity to ensure the details for Furnace and the Fundamentals are accurate, we always advise that you contact the event organiser before setting out for the event to avoid disapointment. All information (whether in text or photographs) is given in good faith but should not be relied upon as being a statement of representation or fact.

With a modern twist of poetic yet catchy lyrics and anthemic melodies the Red Rum Club's sound is unmistakable! Catch them live at King Tuts Glasgow on 11th February 2021!
Read more

York's King No-One are heading out on tour in 2021, catch them live at King Tuts Glasgow on Friday 5th March!
Read more

Steve Mason will play the King Biscuit Time album 'Black Gold' in its entirety on an extensive UK tour including a night at King Tuts Glasgow on 13th March 2021!
Read more

With a growing community of dedicated fans around the world, Jacob Lee is back out on tour, don't miss him live at King Tuts Glasgow on 16th March 2021!
Read more

Scottish pop-rock band 'Dancing On Tables' are on tour in 2021 and will stop off at King Tut's Glasgow on 25th March!
Read more

Bad Hombres will throw one last party at Glasgow's King Tut's on Friday the 2nd of April 2021!
Read more

Mae Muller has announced her 'No One Else, Not Even You' tour for 2021, which will come to King Tuts Glasgow on April 8th!
Read more

Bad Touch will bring their 'Kiss The Sky' UK Tour to King Tuts Glasgow on 9th April 2021 with support from Piston!
Read more

Ex-Transvision Vamp's Wendy James is heading out on tour with her band in 2021, catch her live at King Tut's Glasgow on Saturday 10th April!
Read more

Lonely The Brave have announced a spring UK tour in support of their upcoming third album 'The Hope List', catch them live at King Tuts Glasgow on April 17th!
Read more

West-London born and raised, BLOXX are already showing all the right signs of becoming on the UK’s most exciting new prospects! Catch them at King Tuts on April 19th!
Read more

Tim Burgess, lead singer of one of the defining bands of the '90s, The Charlatans, is focusing on his project as a solo artist catch him live at King Tuts Glasgow on 21st April!
Read more

Following on from their sold-out shows in February 2020, Smoke Fairies will return to the UK in 2021 – including a night at Glasgow's King Tuts on 23rd April!
Read more

17 year-old Bedfordshire songwriter and multi-instrumentalist Alfie Templeman has announced a tour for 2021 including a night at King Tuts Glasgow on 26th April!
Read more

Haunt the Woods are a 4 piece Alt-Rock band from Cornwall, catch them live at King Tuts Glasgow on 27th April!
Read more

Cabbage have announced their return to the floorboards with a 2021 UK tour, catch them live at King Tuts Glasgow on 6th May!
Read more

Wildly acclaimed Brooklyn songwriter Joan As Police Woman returns in 2021 with her 'Cover Two' tour, catch her at King Tuts Glasgow on 16th May!
Read more

Fenne Lily brings a rawness and open honesty to her music which is both refreshing and compelling in equal measure, catch her live at King Tut's Glasgow on 22nd May 2021!
Read more

Jane Weaver is a rare example of a passionate and resilient Northern female artist! Catch her live at King Tuts Glasgow on 7th June!
Read more