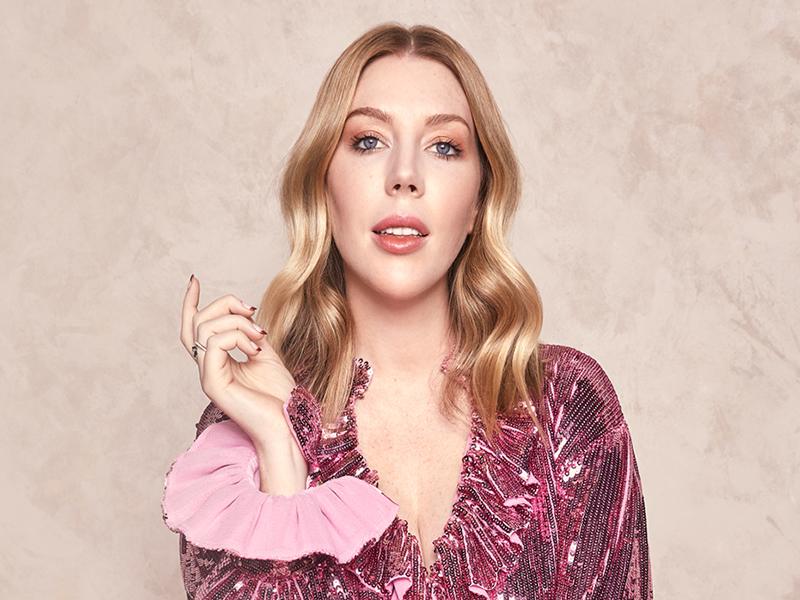 Born and raised in a small town in Ontario, Canadian comedian Katherine Ryan found comedy stardom after she relocated to London. Finding kindred spirits on the capital's stand-up scene helped the former Hooters staff trainer (Ryan claimed she was fired for writing "club sandwiches not seals" on a specials board) hone her voice and progress from open mic nights to eventually becoming a familiar face on panel shows and a team captain on 8 Out Of 10 Cats.

Ryan proved herself to be something of a spiritual successor to the late Joan Rivers, due to her fondness for caustic put-downs and willingness to venture into dangerous territory in pursuit of a joke. These traits also earned her a spot alongside the similarly minded Jimmy Carr on Channel 4’s Your Face Or Mine and Netflix panel show The Fix.

By 2019, Ryan had cemented a productive partnership with the streaming giant, including two well received comedy specials, Glitter Room and In Trouble. An appearance on Who Do You Think You Are? led to a trip home to Canada and a reconnection with her childhood sweetheart, who she later married in 2019. That same year, Katherine Ryan toured the UK for a second time.

In 2020, Netflix released the sitcom The Duchess, written by and starring Ryan as a single mother in London. Ryan has said the series is a heightened version of her own life story, particularly in her portrayal of a single mother in a foreign city.

In October 2020, Katherine Ryan announced her Missus UK tour, set to kick off in September 2021 and run until May 2022. The name of the tour references the previously determinedly single Ryan's newly married status.

Other Events at SEC Armadillo or Glasgow International Comedy Festival

Blood Upon The Rose

Blood Upon The Rose is an enthralling love story set against the background of the Easter Rising in Dublin 1916, catch it at the SEC Armadillo on 27th August!
Read more

Dr. Jordan Peterson is bringing his Beyond Order: 12 More Rules For Life Tour to the SEC Armadillo on 6th September.
Read more

A Night with Laudrup & Gascoigne

A Night with Laudrup & Gascoigne will see two Rangers legends come together on 9th September for an evening of stories, heroics and football memories!
Read more

Featuring the songs that have rung round Celtic Park over the years (performed by a live band), Celtic - The Musical tells the amazing story of this legendary club.
Read more

Come and experience the iconic sounds of Frankie Valli & The Four Seasons authentically recreated by a phenomenal cast and live band at the SEC Armadillo on 25th September!
Read more

The People's World Champion, Tyson Fury, is in Glasgow for one night only when he brings Fury Fest - The Official After Party Tour to the SEC Armadillo on 30th September!
Read more

Former Smiths frontman Morrissey has announced a huge solo tour including a night at the SEC Armadillo on 2nd October!
Read more

Lindsey Buckingham has announced his first EVER solo tour of Europe including a date at the SEC Armadillo in Glasgow on 3rd October!
Read more

Will Young has confirmed a huge UK tour celebrating his 20 year career! Will's tour will kick off on 12th October with a night at the SEC Armadillo Glasgow!
Read more

X Factor winner, musical theatre star and number one selling artist Joe McElderry is set to electrify theatres across the UK with a brand-new tour celebrating the music of the late George Michael!
Read more

Whitney - Queen of the Night

Whitney - Queen of the Night is a stunning celebration of the music and life of one of the greatest singers of our time, don't miss this amazing show when it comes to the SEC Armadillo, Glasgow!
Read more

Adam Kay: This Is Going to Hurt…More

Award-winning comedian Adam Kay shares entries from his diaries as a junior doctor in this 'electrifying' evening of stand-up and music at the SEC Armadillo on 29th October!
Read more

The Story Of Soul

Get your tickets now, for the must-see show of the year when The Story Of Soul comes to the SEC Glasgow on 30th October!
Read more

Bob Dylan will bring his 'Rough and Rowdy Ways' World Tour to the SEC Armadillo Glasgow for two nights on the 30th and 31st October!
Read more

Legendary guitarist Peter Frampton has confirmed UK dates on the Peter Frampton Finale - The Farewell Tour including a night at the SEC Armadillo Glasgow on 6th November!
Read more

Michael Jackson fans prepare to be wowed as the UK's ultimate tribute to the King Of Pop is heading out on tour including a night at the SEC Armadillo on 11th November!
Read more

Great British Bake Off star Paul Hollywood is hitting the road with a brand-new tour for 2022, catch him at the SEC Armadillo Glasgow on Friday 11th November!
Read more

The Magic of Motown

Music fans are invited to the biggest party of the year as the unstoppable Magic of Motown show steams into town!
Read more

Iceland's Sigur Ros have announced that they will bring their World Tour to the SEC Armadillo, Glasgow on 14th November!
Read more

An Evening With Noel Fitzpatrick

Noel Fitzpatrick returns to the stage this autumn with a brand-new show which will delight animal lovers of all ages and anyone who feels like they need some love, hope and healing in their lives!
Read more

For the first time ever dynamic drag duo Trixie and Katya are going out on the road together in Europe! Don't miss them live at the SEC Armadillo on 25th November!
Read more

Britain's best-loved rockers STATUS QUO are extending their 'Out Out Quoing' tour with six additional Christmas dates including a night at the SEC Glasgow with very special guest Shakin' Stevens!
Read more

Disney's The Muppet Christmas Carol is live in concert across the UK this winter, featuring its musical score performed live to the film! Don't miss it at the SEC Armadillo on 28th November!
Read more

Musical virtuoso Jools Holland and his well-renowned Rhythm & Blues Orchestra will return to the SEC Armadillo in December with some very special guests!
Read more

What’s Love Got To Do with It?

What's Love Got To Do With It? is the ultimate tribute concert to one of the most iconic and loved musical artists of our generation, catch the tour when it comes to the SEC Armadillo!
Read more

John Barrowman - I Am What I Am

Expect a a magical journey through the very best of musical theatre when John Barrowman brings his 'I Am What I Am' show to the SEC Armadillo, Glasgow on 12th February!
Read more

Queen Extravaganza, the official Queen tribute band produced by Roger Taylor and Brian May, return to the UK in 2023 and the tour comes to the SEC Armadillo on 20th February!
Read more

It's time to let your hair down, come dressed to impress and ready to sing along to the greatest party rock songs EVER when Don't Stop Believin' comes to the SEC Glasgow on 4th March 2023!
Read more

Darren Hayes, the multi-award-winning songwriter, iconic performer and one half of the globally revered Savage Garden has announced a major UK tour which includes a night at the SEC on 31st March!
Read more

Dara Ó Briain: So, Where Were We?

Don't miss Dara Ó Briain when he brings his new show 'So, Where Were We?' to the SEC Armadillo Glasgow on 20th April 2023!
Read more

Don't miss the legend that is Billy Ocean when he brings a set hand-picked with greatest hits and crowd favourites to the SEC Armadillo on 28th April 2023!
Read more

Jay Lafferty invites the cream of Scotland's comics to the Stand Glasgow to prove their worth by performing material written especially for the theme of the night!
Read more

Monday Night Improv at the Stand Glasgow is a night out like you've never experienced! Award winning comedians and special guest stars make up hysterical comedy based entirely on your suggestions!
Read more