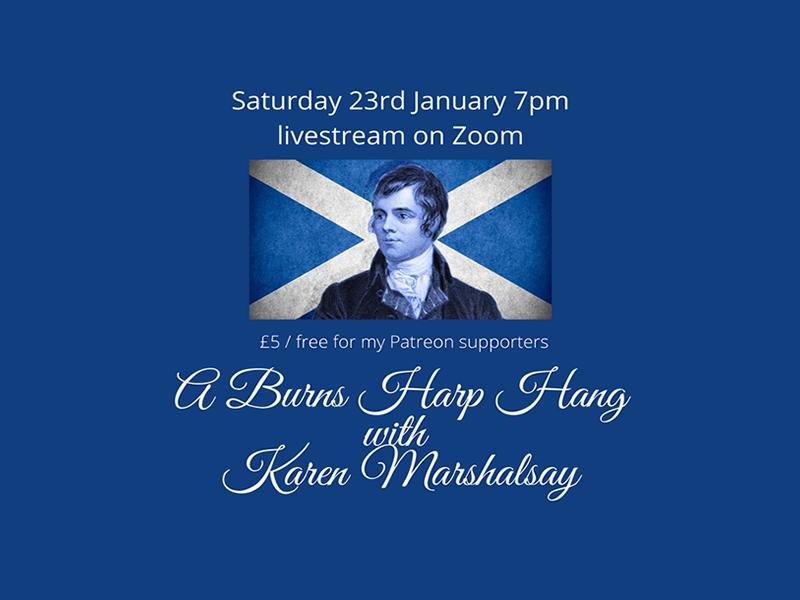 About A Burns Harp Hang with Karen Marshalsay

Karen is a master of all three Scottish harps – the warm sounding gut harp, the clear ringing wire-strung clarsach and the baroque bray harp with its buzzing sitar-like effect. She released her first album , The Road to Kennacraig to enthusiastic reviews (**** - The Scotsman) in 2019.

With a particular interest in playing pipe music on the harp, Karen has worked with Allan MacDonald, of the famous Glenuig piping brothers, featuring in his acclaimed pibroch concerts, including the Edinburgh International Festival’s Herald Angel Award-winning From Battle Lines to Bar Lines series in 2004.

She also featured in the National Piping Centre’s Ceòl na Piòba concert in 2013 and has worked with African, Paraguayan and Indian musicians on multi-cultural projects including Yatra, which premiered at the Edinburgh Mela in 2008.

More recently she guested with the Russian String Orchestra, playing her own compositions, during the Edinburgh Festival 2018.

The Road to Kennacraig was produced at Temple Studios by Robin Morton, a founder member of internationally regarded folk band Boys of the Lough and one of traditional music’s top producers whose credits also include Dick Gaughan’s classic Handful of Earth, Alison Kinnaird’s seminal The Harp Key and albums of Gaelic singing by Flora MacNeil and Christine Primrose.

As well as appearing in solo concerts, Karen is currently a member of Irish folk music legend, flute and whistle master and singer Cathal McConnell’s trio. She has also produced new works for Celtic Connections’ New Voices series, Hands up for Trad’s Distil showcase concerts, and Drake Music Scotland, and she was Composer in Residence with Harps North West in 2016.

While we take every opportunity to ensure the details for A Burns Harp Hang with Karen Marshalsay are accurate, we always advise that you contact the event organiser before setting out for the event to avoid disapointment. All information (whether in text or photographs) is given in good faith but should not be relied upon as being a statement of representation or fact.

Join Glasgow Libraries online Bookbug session every Wednesday at 10am for fun songs, stories and rhymes your little ones will love!
Read more

Join Yoga with Debs for inclusive Yoga classes for all children 4-8 years, hosted online via The Wee Retreat!
Read more

Yoga with Debs will be hosting another block of inclusive Yoga classes for tweens and teens on Zoom via The Wee Retreat!
Read more

Carlton Studios are holding weekly livestreams, featuring a different band each week from the Carlton Studios team, as part of their Crowdfunder appeal!
Read more

U Belong is a new multilingual platform in Glasgow featuring performances based on the theme of 'Futurism' by BPOC, LGBT+ and disabled poets, artists, musicians and comedians!
Read more

Dino Team invite you to join them online as they introduce you to their baby T-Rex and Triceratops dinosaurs and some real live reptiles too!

Grab a hot drink and your favourite pen and notebook (or that journal you got for Christmas!) and get ready to see what writing can do for you on this introductory journaling workshop!

This Celtic Connections concert, featuring Robbie Greig and Hamish MacLeod, is one of a series designed to be accessible and enjoyable for people with dementia, and their friends and families.