Say It Loud: Don Letts - There And Black Again Tour

Don Letts will bring his 'There And Black Again' tour, which looks back on his life and career in a series of stories and film clips, to Broadcast Glasgow on Saturday 31st July! 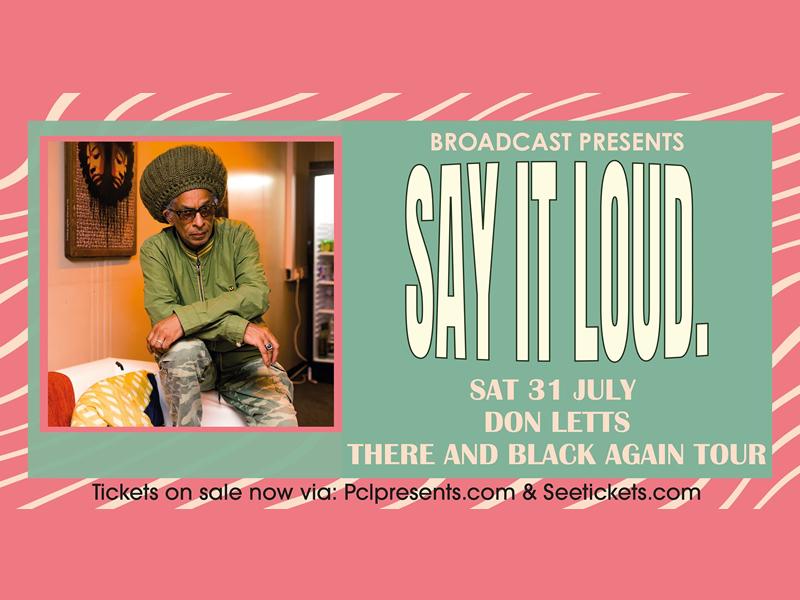 About Say It Loud: Don Letts - There And Black Again Tour

Filmmaker, musician, DJ, broadcaster, social commentator, husband and father – Don Letts has always defied conformity. A British-born son of Windrush parents, he ran the hugely influential Acme Attractions store in Chelsea before becoming DJ at London’s only punk club The Roxy, where he turned a generation of white youth onto reggae and Bob Marley onto the punky-reggae party. Don’s first film broke rules and box office records at the ICA, his feature debut Dancehall Queen is still the most successful Jamaican-made movie ever. Don has been hosting his Culture Clash radio show on 6 Music since 2007 and continues to be a massively in-demand DJ from London to Tokyo and all points between.

In There and Black Again: The Tour, the Rebel Dread looks back on his life and career in a series of stories and film clips that trace a line from the early 1970s and Black Panthers through to today and the BLM movement, bringing in style tribes, culture wars, music, revolution, politics and passion.

Other Events at Broadcast

Join Dave Haslam as he discusses his life and career as a DJ and writer at Broadcast Glasgow on Wednesday 8th September!
Read more

Pan Amsterdam has announced a UK tour for September, including a night at Broadcast Glasgow on the 14th!
Read more

ARXX will bring their infectious teen-angst, punk-driven pop to Broadcast Glasgow on their biggest UK tour to date this summer!
Read more

Alice Merida Richards and Sam Pillay aka Virginia Wing are heading out on tour in support of their new album 'private LIFE', catch them live at Broadcast Glasgow on the 29th September!
Read more

Night Flight have announced they're heading out on a UK tour in October, don't miss them live at Broadcast Glasgow on the 13th!
Read more

Jockstrap are heading out on a UK tour this Autumn, catch them live at Broadcast Glasgow on Saturday 16th October!
Read more

Brighton's Gender Roles have announced their 'Rock Refresher' UK tour which will stop off at Broadcast Glasgow on October 20th!
Read more

Saint Agnes celebrate the release of their mini album, Vampire, with a UK tour announcement including a night at Broadcast Glasgow on 21st October!
Read more

The seminal rock band Mush have reformed to play a series of intimate UK dates including one at Broadcast Glasgow on Thursday 28th October!
Read more

Du Blonde will support her new album 'Homecoming' with a UK tour of the same name including a night at Broadcast Glasgow on 8th November!
Read more

Teeth Of The Sea & The Utopia Strong

Heading out on tour in November, don't miss Teeth Of The Sea & The Utopia Strong as they co-headline a night at Broadcast Glasgow on the 17th!
Read more

Bess Atwell is heading out on tour with music from her new album 'Already, Always', don't miss out on tickets for her show at Broadcast Glasgow on November 21st!
Read more

With influences like J-Dilla, D’Angelo and Hiatus Kaiyote, Brighton based four-piece Yakul cut an idiosyncratic figure in British music don't miss them live at Broadcast Glasgow in November!
Read more

Katherine Priddy is heading out on tour to celebrate the release of her debut album, The Eternal Rocks Beneath, catch her live at Broadcast Glasgow on 14th December!
Read more

Madrid's finest, The Parrots, have announced a run of UK shows including a night at Broadcast Glasgow on 1st February!
Read more

Introduction to IP: How to Identify and Protect your IP Assets

Whether it's an invention, design, brand name, literary work or a song, this session will give you the knowledge to identify the Intellectual Property assets contained within your business!
Read more

This year, Castlemilk Park Project are combining wildlife and photography in a series of photo walks and talks!
Read more

Your favourite movie night is back! Enjoy a line-up of feel-good films and movie classics plus a meal, dessert and drink, all set up socially distanced style in the stunning Grand Ballroom at Sloans!