Pathway To Paris, a special concert starring Patti Smith, aims to highlight the importance of the Paris Agreement is to be staged at Theatre Royal Glasgow on 31st October. 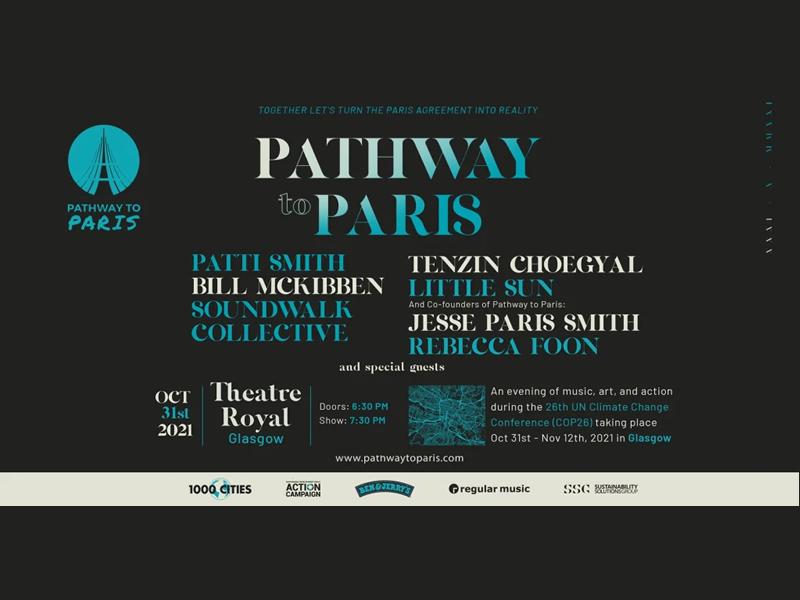 About Pathway To Paris

Pathway to Paris, which will held on Sunday 31 October in collaboration with Regular Music, will focus on the importance for nations to push for, achieve, and go beyond the climate targets highlighted in the Paris Agreement, and for cities to lead the way.

Bringing together leading musicians, artists, thinkers, and policymakers, this concert will serve as a call to action, urging the international community to ramp up ambition towards a climate safe future for all.

The first Pathway to Paris concert took place in Paris in 2015, and coincided with the adoption of the Paris Agreement. In 2017 at the United Nations Secretariat, Pathway to Paris announced their 1000 Cities initiative for Carbon Freedom. The initiative invites all cities of the world to transition off fossil fuels and move to 100% renewable energy as soon as possible in order to turn the Paris Agreement into reality.

The concert will feature Patti Smith, Tenzin Choegyal and Soundwalk Collective (in collaboration with Patti Smith and Jesse Paris Smith) to perform Crisis of the Lost, a sound piece composed of underwater recordings deriving from the TBA21-Academy sound archive that documents the voice of ocean life in contrast with the destructive impact of manmade acoustic pollution over all species of marine life.

Crisis of the Lost is part of a collaborative body of work and series of album projects between Patti Smith and Soundwalk Collective, entitled Correspondences, due for publication and release in Spring 2022.

The live performance is accompanied by visualizations by Territorial Agency to provide visceral insights into the scale and mechanics of the ecological threat that is sound pollution in the ocean. The piece features additional recordings carried out by sound artist Jana Winderen during field trips in Belize, Panama, Dominican Republic, Norway and Iceland; as well as recorded detonations of the seismic airgun blasting acquired from Simone Baumann Pickering’s lab at Scripps Institute for Oceanography, and cello written and performed by Lucy Railton.

Pathway to Paris Founders Jesse Paris Smith and Rebecca Foon will also be performing throughout the evening. Speakers include 350.org’s Bill McKibben and other special guests to be announced soon.

All proceeds from this evening will be donated to Pathway to Paris’ 1000 Cities Initiative for Carbon Freedom.

Join Max, Auntie Aggie and Morag the Rabbit as they get ready for the biggest and best party of the year... The McDougalls Christmas SingAlong at the Theatre Royal Glasgow!
Read more

Go Dance is back featuring 45 energetic and innovative new works from dance groups from across Scotland at the Theatre Royal Glasgow between the 1st and 4th February!
Read more

Festival favourites RURA have teamed up with four folk music luminaries to create a unique collaborative EP, which will be premiered at the Theatre Royal Glasgow as part of Celtic Connections 2022!
Read more

Four lovers lost in the woods, fairies, magic, comedy and more – all come together in an otherworldly blend of imagination and reality in Scottish Opera's production of A Midsummer Night's Dream!
Read more

The Diary Of A CEO Live

Steve Backshall will be bringing the sea to the Theatre Royal Glasgow next Spring with his brand-new stage show Ocean, promising to make a splash with audiences of all ages!
Read more

Inspired by a true story, Everybody's Talking About Jamie is the new award-winning five-star hit musical for today, catch it at the Theatre Royal Glasgow in April!
Read more

Join Rob Brydon, Lee Mack and David Mitchell for an unmissable evening of chat, comedy and general messing around as they bring their Town To Town tour to the Theatre Royal Glasgow on 25th May!
Read more

Take an unforgettable journey of sound and vision through David Bowie's golden years from Space Oddity through to Let's Dance when Bowie Experience comes to the Theatre Royal Glasgow!
Read more

Expect songs, puppets, laughs and more rhymes than you can shake a chime at when Oi Frog and Friends! comes to the Theatre Royal Glasgow in June!
Read more

Strictly Come Dancing professionals Anton Du Beke and Giovanni Pernice join forces for their first ever tour together - Him & Me! Don't miss it when it comes to the Theatre Royal Glasgow in July!
Read more

An Evening with David Sedaris

Coming to the Theatre Royal Glasgow, The Best Exotic Marigold Hotel is a joyous comedy about taking risks, finding love and embracing second chances, even in the most surprising of places!
Read more

James IV - Queen of the Fight

Acclaimed playwright Rona Munro takes you back to a thrilling and uncharted period of Scottish history in this brand new production, James IV - Queen of the Fight!
Read more

Sing Along With Santa

Get your wee ones in the festive spirit with a Christmas sing along with Santa and his elves at The National Piping Centre!
Read more

Myles Kennedy has announced a seven-city UK tour in support of his sophomore solo album, The Ides Of March, don't miss him live at the O2 Academy Glasgow on 6th December!
Read more