IMPORTANT: Where possible we will update our listings to notify of cancelled, postponed and rescheduled events, however we STRONGLY ADVISE that you check with the venue/organiser in the first instance for updates.

A demonstration will be held in Kelvingrove Park on Friday 10th December as part of Clyde 1 & 2's #LightTheWay campaign which is calling for improved lighting in the city's parks. 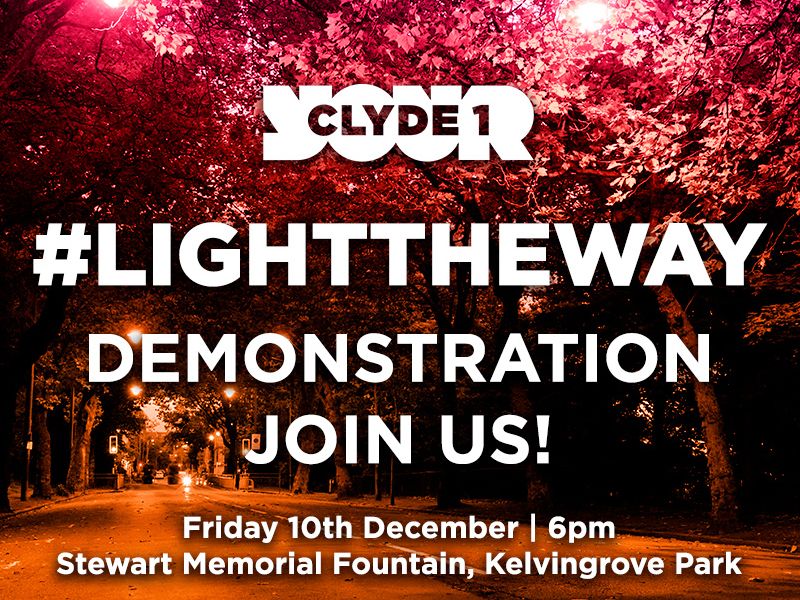 Hundreds of people are set to gather in Kelvingrove Park next month, demanding Glasgow City Council do more to keep them safe at night.

The demonstration, which is part of Clyde 1 & 2’s #LightTheWay campaign, will be held in the park at 6pm, at the Stewart Memorial Fountain and will bring people from across the city together to call for improved lighting in city parks and to highlight the safety concerns of women and groups across Glasgow.

The event is part of Clyde 1’s continuing focus on improving women’s safety and follows initiatives such as ‘I Walk With Women’ which examined what more men can do to help keep the streets safe and the date marks the end of the UN’s annual 16 day campaign against gender based violence.

This year’s annual #LightTheWay campaign was launched by Clyde 1 earlier this month and has brought together a range of community groups and organisations who are calling on the local authority to provide safe lighting in Glasgow’s greenspaces, particularly Kelvingrove Park which is one of the most popular in the city.

Hosted by Clyde 1’s Cassi, the event will have a range of speakers including Natalie Crawford-Goodwin from the #LightTheWay campaign, with additional speakers to be announced closer to the date.

The debate over lighting in the park was reignited during COP26 after a Police diversion forced locals to walk through a dimly lit area of Kelvingrove to get home. Generator powered lights were temporarily put into the park for the event and campaigners are keen that the improved light is now made permanent.

The issue of women’s safety is continuing to remain high on the agenda with the recent Home Office appointment of former lord advocate Elish Angiolini to chair an inquiry to address issues raised following the abduction, rape and murder of Sarah Everard and Glasgow campaigners believe it is more important than ever that action is taken and that “we must do more.”

#LightTheWay spokesperson and award-winning campaigning journalist at Clyde 1 News, Natalie Crawford, said: “Friday 10th December, the day of the demonstration is the last day in the UN’s 16 days of action against gender-based violence so it is really appropriate to bring together #IWalkWithWomen and #LightTheWay.

“We can - and must - do more to protect women across Glasgow and we have already seen that action can be taken when there is political will.

“This demonstration will ensure that decision-makers know that we will not stay silent and that women’s, and all Glaswegian’s, safety at night should be a top priority.

“We are anticipating a good turnout which will reflect the strength of feeling about the campaign- we must protect women better.”

#LightTheWay demonstration host and co-presenter of Clyde 1’s Bowie@Breakfast, Cassi Gillespie, said: “I just don’t feel safe on my local streets at the moment. I don’t think there’s enough lighting anywhere, in parks, on country roads and even rural areas. And as the world is moving, we’re being asked to walk more and cycle more - how are we supposed to do that when we don’t feel safe at night?

“I limit myself to daytime hours because I can’t walk through my local park – there’s no lighting. It’s not just about women’s safety, it’s about us all feeling safe when we walk the streets at night.”

The #LightTheWay demonstration takes place at 6pm on Friday the 10th of December at the Stewart Memorial Fountain in Kelvingrove Park. All our welcome to attend to show their support.

Other Events at Kelvingrove Park

Disco in The Park with Ya Dancer Silent Discos

Childrens Disco In The Park with Ya Dancer Silent Discos

This class is for beginner knitters and arm knitters alike... learn the basics of knitting, all while creating a super luxurious chunky blanket!

The Dockyard Social brings together the best street food traders Scotland has to offer all under one roof... everyone is welcome from families and foodies, to dates and dogs!