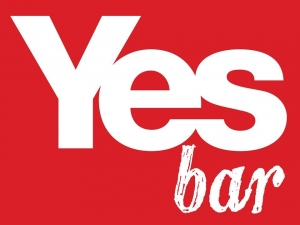 Listed Under Eating and Drinking - Bars and Pubs

Opening in October 2011 originally as Vespbar we established ourself as Glasgow’s hippest independent bar! Then in the run up to the Scottish Independence referendum, the owners Suz & Jim decided to standup for what they believed in, and openly support the independence campaign by changing the name of the bar to Yesbar! This is just the beginning of the story we are Yesbar now and forever. Watch this space!

Located at the heart of the city centre, in Drury Street Yesbar is set over three floors and has a capacity of nearly 200. Nestling in the basement is our much hyped, full-time comedy club which plays host to some of the countries biggest and best comedians five night a week.

Sporting a retro style Italian café interior, with original 1950′s seating, taken straight from an original ice cream parlour. Part kitsch café, part slick city centre bar, its serves pizza by the metre (yes by the metre!!) An idea, which has taken off big style in London. Now thanks to Yesbar, us Glaswegians can get a slice of the action!!

Another first in the bar is Prosecco on tap, Prosecco served from a dedicated font in the centre of the bar, our Prosecco San Martino is imported straight from Italy in little 20 litre kegs.

All information (whether in text or photographs) is supplied in good faith but should not be relied upon as being a statement of representation or fact. We take every opportunity to ensure the details for Yesbar are accurate, please contact us at hello[@]whatsonnetwork.co.uk if any of the above information is incorrect.

Sorry, but we have no upcoming events for Yesbar. If you know of an event taking place at Yesbar or anywhere else in Glasgow tell us about it and we'll list it on the website, for free!

Sharkey's Bar is a family run, dog friendly local with great food and great entertainment. All functions and occasions catered for to the highest quality...
Read more

The Hard Rock Cafe Glasgow has been rocking the Style Mile on Buchanan Street since November 2013!
Read more

The Bath Street Palomino is a stylish bar and restaurant on Glasgow's busy Bath Street in the city centre!
Read more

Pay attention at the back, settle down and keep your eyes on your own work. The former Woodside School is no longer the responsibility of the School Board...
Read more

DogHouse Merchant City is a food-focused venue that celebrates beer at every turn. It majors in insanely good old-time barbecue food and smoked meat,...
Read more

Dockyard Social is a street food and bar hub in Finnieston, close to the SEC, The Hydro and the West End.
Read more

Since its inception in 1990, King Tut’s Wah Wah Hut has been at the forefront of the Scottish live music scene and continues to be one of the most celebrated venues in the world.
Read more

One of Glasgow's best kept secrets – you can find the Alpen Lodge hidden in the heart of our wonderful city.
Read more

Originally established in 1885 as 'The Allison Arms' we have maintained a long and happy tradition as a community local, cosy, welcoming and friendly pub!
Read more