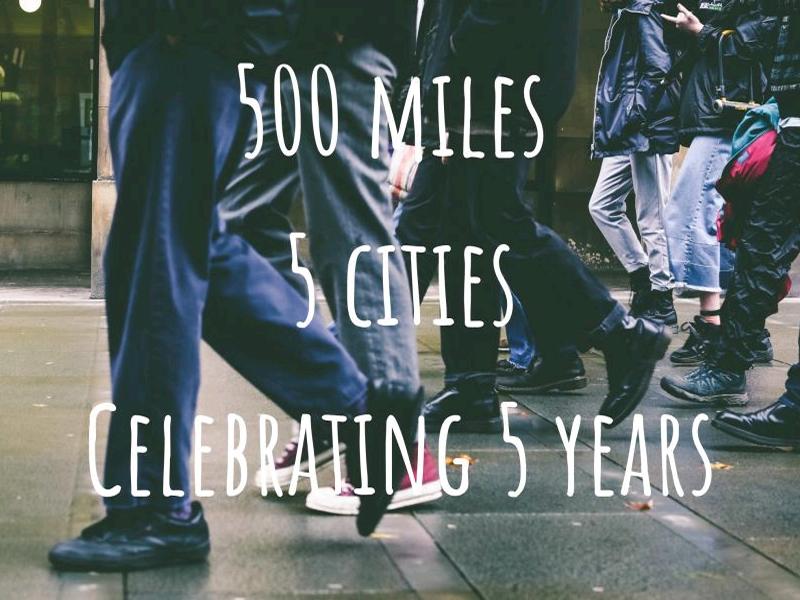 Invisible Cities, the social enterprise operating in Edinburgh, Manchester, Glasgow and York - that trains people who have experienced homelessness, to become walking tour guides of their own city  – is inviting supporters, friends, customers and partners to take part in a virtual mile-covering challenge, to celebrate Invisible Cities turning 5.

From April - July there are 4 legs (one per month) that collectively make-up 500 miles as participants virtually move between Invisible Cities locations. Participants are invited to sign up for one leg, or all 4 and the challenge is to complete the number of miles required for that leg, within the month.

Each leg varies in distance, so there's something for everyone, from absolute beginners to fitness enthusiasts alike. The challenge can also be enjoyed as individual or in teams of up to 6, to reach the target miles. People can also choose between walking, running, cycling and swimming when it comes to how they decide to cover the mile target.

The purpose of Invisible Cities’ virtual fundraiser is to connect individuals with other like-minded people all over the UK to raise money for those affected by homelessness.

Zakia Moulaoui Guery, Founder & CEO of Invisible Cities comments “After a full year of being stuck indoors, getting outside to exercise is more important for our mental health than ever before. As COVID-19 has had a huge impact on homelessness, we thought we'd combine the benefits of outdoor activity with the effort to help support those experiencing homelessness through the pandemic. We really don’t think we could have found a better way to celebrate our 5th birthday!”

To be part of the latest Invisible Cities initiative participants simply need to fill the form which can be found on the social enterprise’s official website, pay the £10 entry (100% of which will support their work to help combat homelessness) and all details for the challenge will then be emailed directly to them.

As part of the initiative, Invisible Cities will also set up a personal Go Fund Me account for all ‘challengers’ to share and collect sponsorship and needed encouragement from friends and family, and the team will share fun updates about history and homelessness organisations depending on the point reached on the virtual journey.

They will also receive access to the official Invisible Cities Strava group to track miles and become part of their community as well as receiving virtual updates showing where they are on their journey.

For more information and to register for the virtual miles-covering challenge visit:
invisible-cities.org