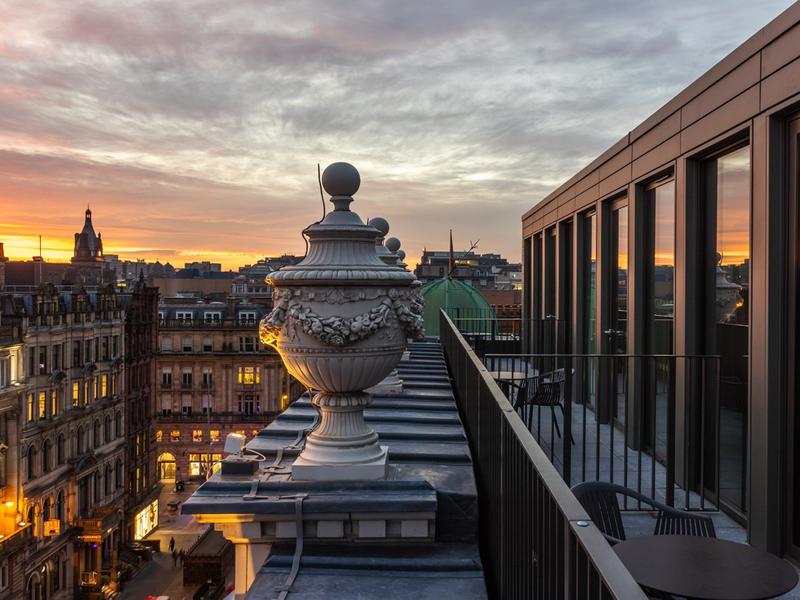 After seeing The Gate’s hilarious April fools post about their spoof roof terrace with pulleys and a hard hat, Native Glasgow reached out to the Gate team to curate this exciting collaboration and support local business.

Combining the best view in Glasgow with the best drinks, The Gate’s bartenders will shake up an exclusive menu as part of four-day residency in three of Native’s private penthouse apartments in a first for the hotel.

With very limited bookings, the fun Penthouse pop-up will see The Gate team bring their famous hospitality and service to Native Glasgow, and run from 12pm until 10pm over the four days. Providing guests with a belter of a skyline view overlooking George Square, the unique and socially distant takeover gives Glasgwegians a chance to enjoy the much-loved Gate cocktails before the bar reopens.

If you’re lucky enough to get a table at this intimate event, you can sip on drinks from their special menu like the fresh Skyline with Roku gin, watermelon, lime, topped with fizz. Misty Eyes is a fruity libation with Haku vodka, elderflower, Chartreuse Gentian, butterscotch liqueur and pineapple, while Techno Viking Pt. 2 with Highland Park 12 year old, cacao Campari, sweet vermouth and cherry brandy won’t disappoint.

Located in the heart of Glasgow city centre, Native Glasgow is stylishly set in an Edwardian Art Deco office building, formerly the headquarters of the Anchor Line Shipping Company, with 64 apartments ranging from studio to penthouse spaces.

Gary White General Manager of Native Glasgow said: “The Gate is one of the best bars in the city and after seeing their April Fools post on social media, we had to make their roof terrace spoof a reality. As one of our Neighbourhood Heroes, we’re really excited to host our first Penthouse-party with The Gate team and we’re sure that our guests will love it. Their famous hospitality combined with our view of the city is going to make for one exciting event!”

Ally Shaw, general manager of The Gate said: “There isn’t a more ideal destination than Native to host a roof terrace pop-up. The setting is unreal and the drinks are going to be banging! Make sure you book early if you want a table. This event is going to be special.”

The Gate x Native Penthouse Pop-Up will take place on Thursday, 13th May until Sunday, 16th May from noon until 10pm. Bookings will be released next month, to register your interest head to http://bit.ly/gatepopup

For more information on Native aparthotels, head to www.nativeplaces.com