The Griffin is Glasgow's original diner & pre-theatre venue, come along and try some our of great gins, whiskies, ales and delicious food! 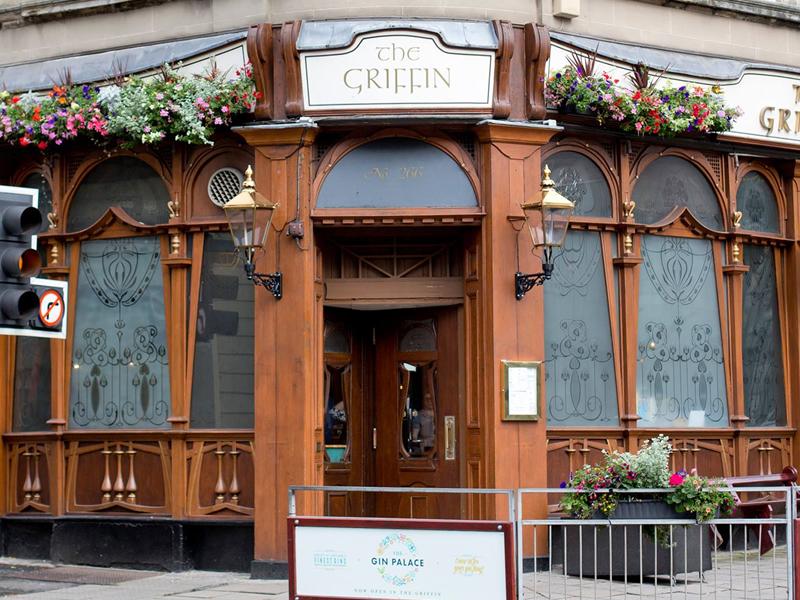 Listed Under Eating and Drinking - Bars and Pubs

The Griffin is a traditional Glasgow Public House – with a contempary feel.
Built in 1903 The Griffin (known as The Kings arms up until 1969) sits proudly on the corner of Bath Street and Elmbank Street.
It was built at the same time as the King’s Theatre opposite, and the two have seen the passing of over a century together.

The Griffin is a “B” listed building and retains much of the original wooden interior, window panels and lead work. The main bar has a beautiful tiled floor, and the fixed seating has had all leather renewed.

For looking like a traditional pub it’s quite trendy, and its relaxed appeal is popular with local celebrities as much as it is with youngsters. It is given a humble nod by Iain Banks in his novel Espidair Street, and is well known by theatre goers the country over. Scenes from the 2013 movie “Sunshine on Leith” were filmed here along with various tv snips.

Today, owned and run by Robert & Angela Mullen, the first independent owners since The Griffin family, this beautiful pub provides a much-needed “local” in the city centre. – No Gimmicks here. The atmosphere is relaxed. The Staff want to look after you and both the food and drink selections are great.

The Griffin serves the local business community and caters for the numerous busy theatre shows, the menu does not try to be too clever. It has old Scottish pub favourites, alongside some more international dishes. The desserts are baked in house and the recipe for the Sticky Toffee Pudding remains a closely guarded secret. (ish)

Music is always varied and never played too loud. There is Live music at The Griffin and some local and not so local acoustic acts are booked for the summer months.

Finally, for those visitors who wish to keep in touch, not only with their friends and colleagues but also with what is going on in the wider world, The Griffin has free wireless internet access.

The Griffin looks forward to welcoming you.

All information (whether in text or photographs) is supplied in good faith but should not be relied upon as being a statement of representation or fact. We take every opportunity to ensure the details for The Griffin are accurate, please contact us at hello[@]whatsonnetwork.co.uk if any of the above information is incorrect.

Upcoming Events at The Griffin

Sorry, but we have no upcoming events for The Griffin. If you know of an event taking place at The Griffin or anywhere else in Glasgow tell us about it and we'll list it on the website, for free!

All Bar One Glasgow

All Bar One Glasgow is a stylish city bar where you can catch up with friends, unwind after work, or simply indulge in sophisticated space and surroundings!
Read more

One of Glasgow's best kept secrets – you can find the Alpen Lodge hidden in the heart of our wonderful city.
Read more

The Poetry Club situated in Glasgow's West End is a hub for art, music, performance, spoken word and billows of smoke!
Read more

For a memorable dining experience, come down and see why we call The Chip one of the best places to eat out in Glasgow!
Read more

Tucked away under the cobbles of Drury Street, just a minute's walk from central station, lies our Speakeasy style bar that has a little something for everyone!
Read more

Located in the heart of Milngavie and at the foot of the iconic West Highland Way, Garvie & Co. has seen new life brought to an 18th century coaching inn.
Read more

In a dazzling glitter fest of flamboyant glory, sparkling with Cher's signature wit and style, you'll be spinning in the aisles to the sounds of her biggest hits when The Cher Show comes to Glasgow!