The Record Factory is an ambitious fusion of music and revelry in Glasgow boasting dynamic space, impeccable acoustics and bold design. 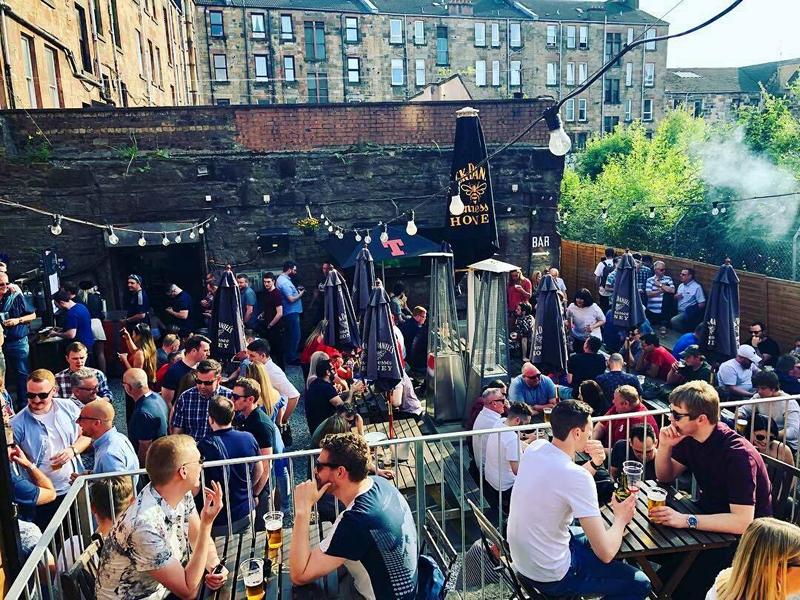 About The Record Factory

Nestled discretely in the heart of Byres Road amongst eatery's and vintage clothing stores, The Record Factory takes inspiration from the underground bars of New York giving Glasgow's rock 'n' roll scene something to get excited about.

Fast becoming the best late night hangout of the West End with a 2am license, The Record Factory exposes the very best in live music, afterparty's, DJ sets and artistic events in the city seven days a week. Its gig and dance floor nuke is an emblem of the venue, hosting events with big names in music like Temples, NME, and Palma Violets since opening.

With its private spaces, huge beer garden, booths, pool area and laidback seating, The Record Factory is the perfect place to eat, drink, gig, dance and simply spend some time in the musical den in the city. There is also delicious and exciting food served daily from Noon till 9pm

With a jukebox of eclectic musical tastes filling the venue with anything from The Rolling Stones, Tame Impala, Baby Strange and The Jam, The Record Factory represents music and the arts in the city in a way no other venue has done before it; effortlessly merging style and taste whilst offering a social hub for a city that comes alive after hours. Just as well then, that we’re open extra late.

Come see what all the fuss is about.

All information (whether in text or photographs) is supplied in good faith but should not be relied upon as being a statement of representation or fact. We take every opportunity to ensure the details for The Record Factory are accurate, please contact us at hello[@]whatsonnetwork.co.uk if any of the above information is incorrect.

Upcoming Events at The Record Factory

Sorry, but we have no upcoming events for The Record Factory. If you know of an event taking place at The Record Factory or anywhere else in Glasgow tell us about it and we'll list it on the website, for free!

A stone’s throw from Charing Cross underground station, close to many other transport links and a walking distance from Sauchiehall street and Kelvingrove...
Read more

Situated in the heart of Glasgow city centre on Sauchiehall Street, BOX is an established, compact Entertainment venue. With a fantastic reputation for...
Read more

Van Winkle in the heart of the East End serves up beer, BBQ, pizza and Scotland's largest selection of Bourbons all day long!
Read more

Expect a warm welcome, great service, good value food and drink, and all the modern touches you need for both leisure and business at The Titan Clydebank!
Read more

The Aragon Bar on Byres Road, Glasgow is a traditional Scottish Bar offering the best in Scottish Hospitality!
Read more

At Speakeasy we pride ourselves on quality, serving a superb selection of cocktails, wines, beers and spirits... mouthwatering food available too until 9pm!
Read more

Located in the heart of Milngavie and at the foot of the iconic West Highland Way, Garvie & Co. has seen new life brought to an 18th century coaching inn.
Read more

Committee Room 9 is a hidden treasure in the Merchant City which offers a warm welcome and great value!
Read more

Harry Styles has announced a series of headline dates, seeing him play arenas across the UK as part of his 'Love On Tour' tour, catch him at Ibrox Stadium on 11th June!