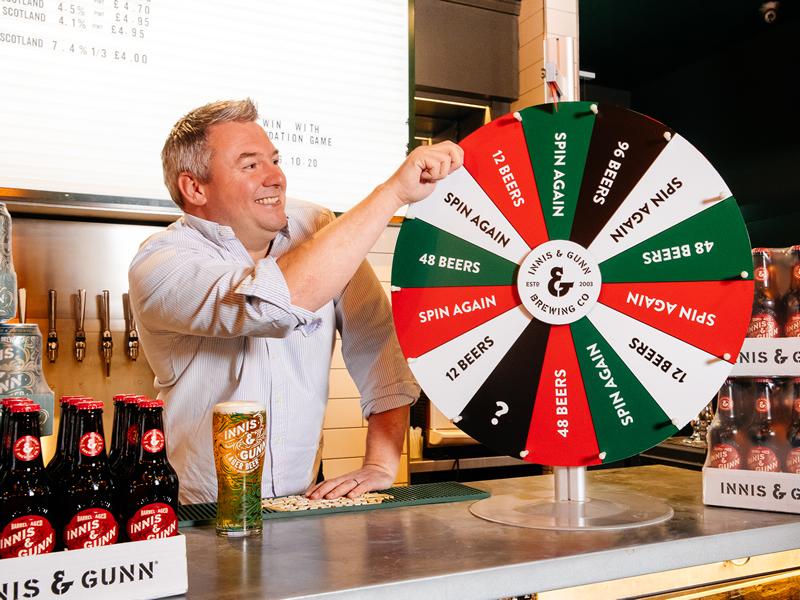 ‘The Recommendation Game’ has been organised to round off the brand’s two month ‘Recommending the Recommenders’ campaign which will draw to a close this weekend.

Beer lovers are being urged to take part on Friday, October 16. The giveaway comes as tighter restrictions come into force across the country, with Innis & Gunn keen to demonstrate the power of recommendation and play its part in providing the nation with some much-needed cheer.

How to play The Recommendation Game:
• Tune in to Innis & Gunn’s Instagram or Facebook pages at 5.30pm on Friday, 16 October, to watch the game live
• When the time is right, you’ll be asked to tag a friend in the comments for a chance to play
• Players will be selected at random and will be able to take part live whilst watching the game unfold
• Host Craig Telfer will be on hand to keep players right whilst operating the spinning wheel and other mechanics to win some beer
• Lucky participants might even land on a challenge for some extra prizes!

Innis & Gunn was named ‘The UK’s most recommended beer brand’ this year in a YouGov poll of drinkers and has been collecting nominations from beer fans in a bid to return the favour. Now the Scottish brewer is closing the campaign by giving away mass quantities of its much-loved Lager Beer and The Original. The game, which will kick off at 5.30 pm, will showcase familiar elements from classic gameshows including a graphic set, a golden telephone and the notorious spinning wheel. Craig Telfer is set to host The Recommendation Game with teams consisting of two players – you and your tagged mate.

Aly Bayne, Head of Brand Marketing at Innis & Gunn, said: “Being named as the UK’s most recommended beer brand this year has been a great achievement and we wanted to give back to our drinkers in a meaningful way. The past couple of months have presented some fantastic opportunities to really show our fans how much we appreciate the accolade, and we’ve been able to reward some truly deserving people across the country.

“To finish with a bang, and since everyone could probably do with a couple of beers right now, we’ve created The Recommendation Game. We wanted to play our part and raise a few smiles in amongst these tough and uncertain times, so we’re urging everyone to get involved on Friday night. We’ve got over 5,000 beers to giveaway so get on either our Instagram or Facebook page, recommend a friend and let’s see how quickly they go.”

Over 1,200 people nominated themselves or a friend / loved one to be rewarded as part of the campaign. Simon Waind, from Salford, was handed £15k worth of support as he prepares to open his new bottle shop next month. The brewer also bagged Glasgow singer songwriter Mark McDonald the gig of his life by live streaming his show from the iconic Barrowland Ballroom stage while Scottish fashion designer Gillian MacDonald was given a full marketing campaign with hopes of landing her a job. Innis & Gunn also partnered with Manchester’s legendary Piccadilly Records to give music lovers some beer and branded goodie bags with any records sold.

To be in with a chance of playing The Recommenders Game, tune in to Innis & Gunn’s Instagram or Facebook page on Friday October 16 at 5.30 pm where you can recommend a friend to play in the comments.

Nova revealed as winner of the 2020 Say Award

The 2020 winner of Scotland’s national music prize, The Scottish Album of the Year (SAY) Award, was revealed as Nova, the youngest ever winner, for her debut release ‘Re-Up’.

People saved by living kidney transplantation have given thanks to their donors and the NHS on the 60th anniversary of the first living kidney donation in the UK.

Innis & Gunn, the UK’s most recommended beer brand, has collaborated with photographer Olivier Barjolle to mark the launch of the latest limited-release beer: Quarter Cask Edition.

Princes Square is delighted to announce a new store opening - Glasgow independent lifestyle store, Ryan James Studio, will open on the ground floor of the iconic shopping centre this Saturday!

Scottish Book Trust has launched Book Week Scotland's 2020 programme, which focuses on the theme of Future.

Europe's largest winter music festival, Celtic Connections, has announced that the 2021 event will be going digital!