The Duke's Gambit Chess Club is held on the last Monday of every month, with students from Glasgow University Chess Club inviting fellow students and chess fans to participate! 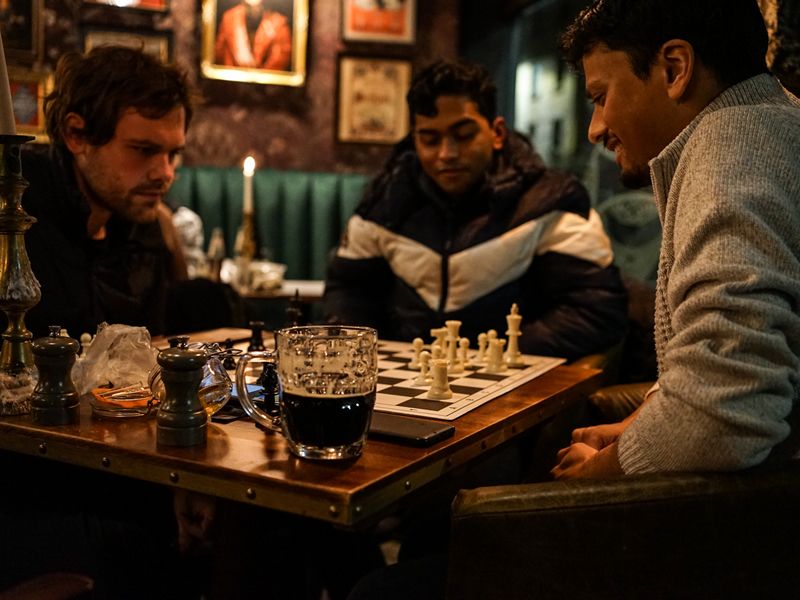 About The Duke’s Gambit Chess Club

ONE of Glasgow’s newest gatsropubs has become the centre of a chess boom in the city. The Duke’s Umbrella on Argyle Street has been hosting informal chess nights since the end of last October. The first few events have become so popular among chess enthusiasts that pub bosses have designated the last Monday of every month as The Duke’s Gambit evening, in tribute to the popular Netflix series, The Queen’s Gambit.

The events will be hosted by students from Glasgow University Chess Club. As well as welcoming budding Kasparovs, Fischers and Karpovs there’s also been great interest from beginners who turned to chess as a way of keeping their brains active during lockdown.

There are even a range of chess-themed cocktails on offer, such as the ‘Pawn-Star Martini’.

So, as we learn to care for ourselves a little more in 2022 here are five compelling reasons to play chess:

Improves Memory
Memory recall is an important part of playing chess if we are to avoid previous errors and outmanoeuvre our opponents. Those who play chess regularly should expect their memory to improve significantly.

Prevents Dementia
Bought an expensive gym membership for the New Year? Great, but don’t forget about your brain. Like every other muscle, your brain needs to be exercised regularly to remain healthy. According to numerous studies, those who regularly play brain games like chess are less likely to develop dementia.

Problem-Solving
Playing chess requires players to think fast. Their problem-solving skills must be sharp to keep pace with a game that can change dramatically in a single move. According to a 1992 study involving 450 school pupils, those who played chess had higher scores on problem-solving tests than their peers who didn’t.

Fostering Creativity
Playing chess activates the right side of the brain, which is responsible for creativity.

Increases IQ
In a famous study of 4000 Venezuelan students, it was shown that after four months of playing chess, the IQ scores of both boys and girls increased. So, while you’re working hard at the gym for that new set of abs, why not increase the fitness of your synapses.

The Duke’s Umbrella is also home to the Glasgow-inspired 3D chess set. This stunning work of chess art features several of the city’s most iconic locations such as Glasgow University; the Armadillo; The Finnieston Crane and The Duke of Wellington statue. It also has a sustainable twist. Each of the pieces is made from soya beans and are thus biodegradable.

Those who come along to The Duke’s Umbrella from 7-9pm on the last Monday of every month will discover the perfect setting to escape the cold winter ‘knights’ in. And if you’re ‘rooked’ for cash the prices are great too. It’ll be an occasion fit for a King (and a Queen).

The Duke's Gambit Chess Club is held on the last Monday of every month, with students from Glasgow University Chess Club inviting fellow students and chess fans to participate!
Read more

It's time to get your game on! R-CADE is back open every Friday, Saturday and Sunday for all your retro gaming needs!
Read more

BGCP Comic Con has made the decision to cross over to Dunoon on Saturday 30th July to present Dunoon's first ever Comic Con in the newly refurbished Queen's Hall!
Read more

RSNO At The Movies - Video Games Music In Concert

To celebrate the 30th Anniversary of their iconic album 'Screamadelica', Primal Scream have anounced a special hometown show in Glasgow's Queens Park on 1st July!

Red Hot Chilli Peppers have announced they will embark on a world tour in 2022 including a night at Glasgow's Bellahouston Park on 1st July!