Adam Boyd brings his exhibition, Causal Thread, to The Briggait between 20th July and 7th August. 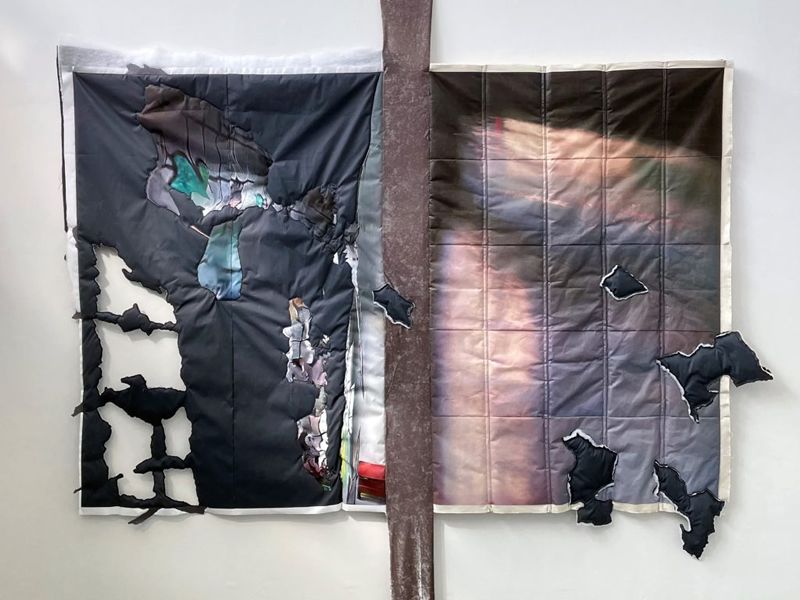 About Causal Thread by Adam Boyd

The content Boyd is drawn to tends to embrace the fugitive, immaterial or ethereal. He employs diverse craft-based channels in order to materialise these fleeting observations. Boyd often documents phenomena refracted by the urban environment, permeating the domestic.

His research orbits pop cultural and art historical content which – in turn – harbour traces of much wider philosophical and scientific debate. A fascination with the tropes of science-fiction has become an internal filter for the quasi-ecclesiastic, supernatural imagery he favours. Boyd aims to situate his practice as a syncretic testbed where ideas and processes coexist and cross-pollinate.

'Causal Thread' takes its title from a deterministic view of time; a chain in which all events are determined completely by previously existing causes. Boyd’s patchwork-like configurations offer up numerous transcriptions of the same event (refracted light). Through his use of photography, lidar technology and traditional textile processes, these works attempt to disrupt a linear notion of time, both pictorially and materially. For Boyd, the line of stitch allows a collision of multiple worlds.

The private viewing of 'Causal Thread' is on Wednesday 20 July, 6pm-8pm.

Adam Boyd (b. 1993, Newcastle-under-Lyme) has recently completed an MFA at The Slade School of Fine Art, London and holds a Bachelor’s from Glasgow School of Art (2016). During his studies he was selected for the Euan Uglow Scholarship and the George & Cordelia Oliver Scholarship. Before commencing his studies at The Slade, Boyd generated two solo exhibitions for venues in Glasgow, Solaristics (2018) & Synthespians (2019). In 2021, Strand Systems, Boyd’s first solo showing outside of the UK, opened in Hafnarfjordur, Iceland. The show represented the culmination of Boyd’s month-long residency at SÍM, Reykjavík in August 2021. Individual works have been exhibited in several group exhibitions in the UK and abroad (Tokyo, Hokkaido, New York, Reykjavik). Adam was recently selected for Bloomberg New Contemporaries 2022.

Other Events at Wasps Artists Studios: The Briggait

Join Wasps Artists' Studios at the Briggait for their annual Summer Market which will showcase the work of their studio holders from across Scotland!
Read more

Zero Waste Scotland and Edinburgh Science are together bringing an interactive exhibition to George Square from 12th - 18th August to get people thinking about society's throwaway culture.
Read more

I See Your Voice, There Was a Silence - Exhibition by Veronika Desova

Multimedia creative Veronika Desova will host her solo exhibition, I See Your Voice, There Was a Silence, at The Alchemy Experiment in August.
Read more

Spot Design Market is back showcasing carefully curated ceramics and prints from a range of highly talented designers!
Read more