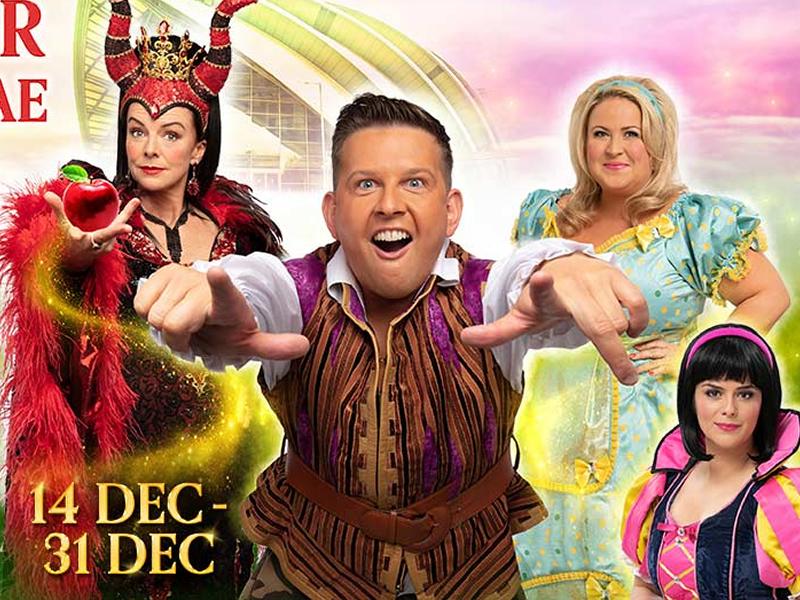 The SEC Armadillo have announced Gary: Tank Commander will be back and leading the cast of this year's spectacular pantomime Snow White and the Seven Dwarfs to victory!

Joining him will be Two Doors Down comedian and actress Doon Mackichan, with Leah MacRae and Frances Thorburn.

Snow White and the Seven Dwarfs will be lavishly brought to life in a production packed full of magical mirrors, seven friendly dwarfs, an abundance of comedy, sensational song and dance and jaw-dropping 3D special effects, for which the annual SEC pantomime is so well known and loved.

Edinburgh-born Greg McHugh trained at the Royal Scottish Academy of Music and Drama. Alongside writing and starring as Gary McLintoch in Gary: Tank Commander, for which he was nominated for a Scottish BAFTA.

Greg also reprised the role live on stage at the Hydro for three sold out nights and starred in the BBC documentary Gary Goes to Hollywood. Greg is also well-known for playing Howard in Fresh Meat, a part he played from 2011 to 2016 and Eddie Scott in The A Word and has appeared in A Discovery of Witches for Sky One and most recently starred in Traitors for Channel 4. On a break from military duties, Gary will be swapping the 104th Royal Tank Regiment for the Armadillo stage and starring as Gary Muddles, best friend to the Princess Snow White.

Emmy Award winner Doon Mackichan will be swapping her signature Two Doors Down vape for a poisoned apple and will star alongside Greg as the Wicked Queen. Star of hit Channel 4 comedy sketch show Smack the Pony, Doon regularly appears on television, film and on stage across the country. In addition to working with Steve Coogan on Alan Partridge, she has starred in Toast of London, Plebs and Brass Eye and competed on Celebrity Fame Academy for the BBC. She is soon to star in the West End opposite Hollywood star John Malkovich in David Mamet’s play Bitter Wheat. Doon is best known for playing Cathy Whyte in Two Doors Down, the award-winning sitcom she has starred in for four series.

Joining them as Snow White’s Nanny will be River City star, comedian and singer Leah MacRae, who also co-starred with Greg McHugh in Gary: Tank Commander. Leah has been a regular on River City for over four years, additionally appearing in episodes of Rab C Nesbitt, Comedy Lab and Two Pints of Lager and a Packet of Crisps. She also starred as Jenny in the BBC sitcom Grownups opposite Sheridan Smith. Leah regularly tours Scotland with her comedy and music productions and is currently on the road with her self-penned, one woman show Leah McRae - My Big Fat Fabulous Diary in which she shares hilarious tales from her past.

Best known for her role as Kim Monroe in BBC’s River City, Frances Thorburn also returns to the SEC having played the Fairy Godmother in Cinderella last year. She was in the original production of Glasgow Girls for NTS and also featured in Doris, Dolly and the Dressing room Divas at Oran Mor and the Edinburgh Festival. Similarly, on stage, she has played Marilyn Monroe at the Citizen’s Theatre, Judy Garland at Oran Mor and Dusty Springﬁeld in A Play, a Pie and a Pint. Frances also appeared in a full season at Shakespeare’s Globe Theatre and in Fiddler on the Roof at the Savoy Theatre in the West End.

Speaking of the cast announcement, Debbie McWilliams, Director of Live Entertainment at the SEC said: “We are delighted Greg is returning to us again with a brilliant cast for this year’s panto, Snow White and the Seven Dwarfs. Everyone’s in for a truly magical and hilarious show!”

Snow White and the Seven Dwarfs will run from Saturday 14 December 2019 to Tuesday 31 December. Book now to secure the best seats, or you won’t be able to look yourself in the mirror!