Nearly 150,000 fans enjoy over 30 acts at the epic Summer Sessions in Edinburgh and Glasgow!

World-class artists including The Cure, Foo Fighters, Florence + the Machine, The 1975, Lewis Capaldi and The Snuts ensured this year's Summer Sessions was the best one yet! 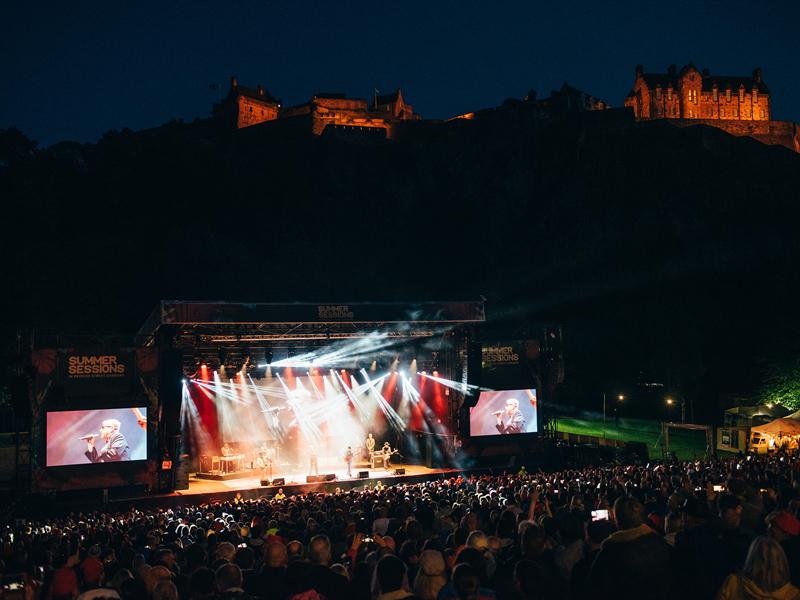 This year’s Summer Sessions Festival series in both Edinburgh and Glasgow brought together nearly 150,000 music lovers, over 30 acts and 40 hours of music, with some of the most iconic names in music including The Cure and Foo Fighters plus hot acts of the moment Lewis Capaldi, The Snuts and the revolutionary The 1975 who brought a politically-charged and important sense of occasion to their closing show in Glasgow last night.

With the Glasgow Summer Sessions series wrapping up its seventh year and Edinburgh closing out its second, we take a look back at the incredible gig series that was Summer Sessions 2019!

Glasgow Summer Sessions Festival featured one of the most legendary line-ups to date, entering its seventh year in style this summer. Two sold-out shows across two consecutive dates got the Glasgow series underway; The Cure who brought with them Mogwai, The Twilight Sad and The Joy Formidable plus Foo Fighters who delivered a truly iconic headline set following a packed bill including Slaves, Frank Carter & The Rattlesnakes, The Van T’s and Hot Milk.

Starting off Summer Sessions in style, The Cure made their epic return to Scotland after a 27 year absence from the country’s live scene and with a career now spanning nearly five decades and 13 albums, their eagerly anticipated return proved well worth the wait. The iconic band delivered an astonishing set that went down a storm with the Glasgow crowd, playing one glorious hit after another and delving effortlessly into one of the most iconic and influential back catalogues in musical history, by treating fans to classic hits like ‘Friday I’m In Love’, ‘Boys Don’t Cry’ and ‘Close To Me’. It was an unforgettable night from one of the world’s most influential rock bands; one that will live long in the memory of Glasgow’s music fans.

Next up, was a sold-out Saturday night at Summer Sessions with festival veterans Foo Fighters which included a crowd singalong to 'Flower of Scotland' plus drummer Taylor taking over vocals for a Queen cover of 'Under Pressure' with Dave Grohl on drums. For an epic finale, the band dedicated the last song 'Everlong' to Scottish crew member Ian - Dave's ear monitor tech of 30 years. Addressing their relationship, Dave said, "He's the one I can't do without, so we can sing this one for him!" From classics including ‘Best Of You’ and ‘All My Life’, to singalong anthems simply made for festivals like ‘Everlong’ and ‘Times Like These’, it was another masterclass in festival headlining from Dave Grohl and co.

After a whirlwind year that has taken them all across the globe, BRIT Award winners The 1975 returned to Scotland to deliver one of the most ambitious, visually inspiring shows the festival has witnessed, reinforcing their status as one of the biggest bands on the planet right now. Opening with brand new punk-rock track ‘People’, frontman Matty Healy was as charismatic as ever, his sharp and timely lyrics promoting self-love, acceptance and inclusivity, rapturously sung back word-for-word by the devoted crowd as he said to the crowd, “If you kiss boys and you're a boy, you shouldn't get in trouble!"

Opening this year’s Summer Sessions in Princes Street Gardens earlier this month was the truly sensational Florence + the Machine who played two back to back shows and featured a very special moment onstage for two fans who got engaged on-stage. With massive singalong hits like ‘Hunger’, ‘Dog Days Are Over’ and ‘Shake It Out’, Florence + the Machine started Summer Sessions just right.

The Princes Street Gardens series was then treated to a legendary line-up next, with Primal Scream bringing along their pal Johnny Marr who collaborated onstage for tracks ‘Loaded’ and ‘Country Girl’. Famed-author Irvine Welsh popped along to see his pals tweeting about his love for the gig.

Next up were CHVRCHES, who made their Summer Sessions debut and returned to the capital for the first time in five years for an atmospheric show underneath the castle.

Man of the moment Lewis Capaldi sold out two back-to-back nights marking another huge milestone in what has been an incredible year for the young singer-songwriter from Bathgate. Supporting his local music scene, Lewis Capaldi recruited fellow West Lothian bands including Indigo Velvet, Luke La Volpe, Mark Sharp & The Bicycle Thieves and The Snuts for his support across two nights. Closing his set with one of the biggest songs of the year, a singalong rendition of ‘Someone You Loved’ brought the night to an emotional end.

The Edinburgh capital was also treated to immense performances from James who played the ultimate festival set of tunes including opener ‘She’s A Star’, ‘Sit Down’ and ‘Laid’, James brought one of the biggest singalongs of the Summer Sessions series so far from the first note they played. A sold-out Courteeners show was heavily anticipated by the Scottish crowd. Featuring local lads Heavy Rapids, who opened up for the Manchester band, the set included ‘Not Nineteen Forever’ and ‘Are You In Love With A Notion?’, making them the perfect Friday night Summer Sessions headliners.

Closing the incredible Summer Sessions in Edinburgh’s Princes Street Gardens were the iconic outfit Madness, who took to the stage on Sunday 18th August. With a two-hour set including ‘House of Fun’, ‘Baggy Trousers’ and ‘One Step Beyond’ all included, it was a sight to behold for the band’s 40th anniversary.