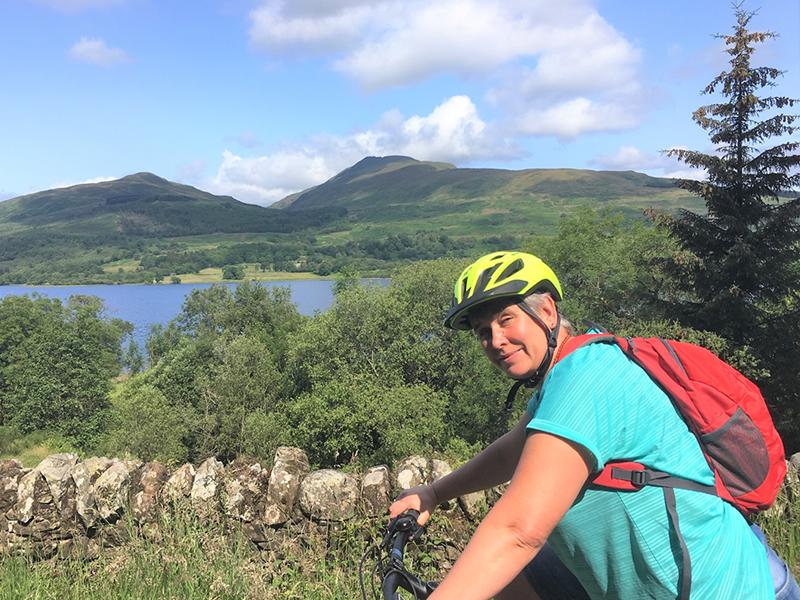 Jason Clark, Cycling Tourism Officer at Forth Valley and Lomond Leader said: “We created the map to encourage more people to get out there and explore the area on two wheels. With e-bikes you can ride for longer and enjoy some of the incredible landscapes and attractions the Trossachs is famous for.”

Routes range from the 12.5km Rob Roy Loop from Strathyre to Balquhidder, to the 50km Loch Katrine Loop from Aberfoyle to Trossachs Pier and onto Stronachlachar.
Jason said: “It’s no surprise that e-bikes are growing in popularity. As well as helping cyclists cover greater distances, they allow people with different levels of fitness to ride together. There’s no need to worry about being able to keep up with your friends!”

It is hoped the new trails will also provide a welcome boost to businesses along the routes, as cyclists stop for a well-earned lunch or coffee and cake while they charge their bike.

Jim Riach of The Loch Lomond and Trossachs Countryside Trust said: “It only takes about 30 minutes for most people to ride 10km on an e-bike. You can let the bike do the work and take the sting out of those hills!

“As well as popular attractions we’ve marked out some quieter routes to avoid busy places, along with great coffee and café stops on the map; so, you’ll be rewarded for going further!”

Proprietor Stuart Fraser said: “We’re thrilled to be a part of this e-biking project, the fast chargers will be a great asset and I’m sure our customers will make great use of them. We’ve seen a real increase in e-biking recently and the timing for this project is just right.”

If you live in The Trossachs area, The Loch Lomond and Trossachs Countryside Trust can provide a loan of e-bikes to individuals and local communities. Bikes can also be loaned from Stirling Active at Travel Hub.

The map also includes details of where to rent an e-bike in the Trossachs.

Image: Anna Clark on the Lochs and Glens Way near Callander and Loch Venachar.