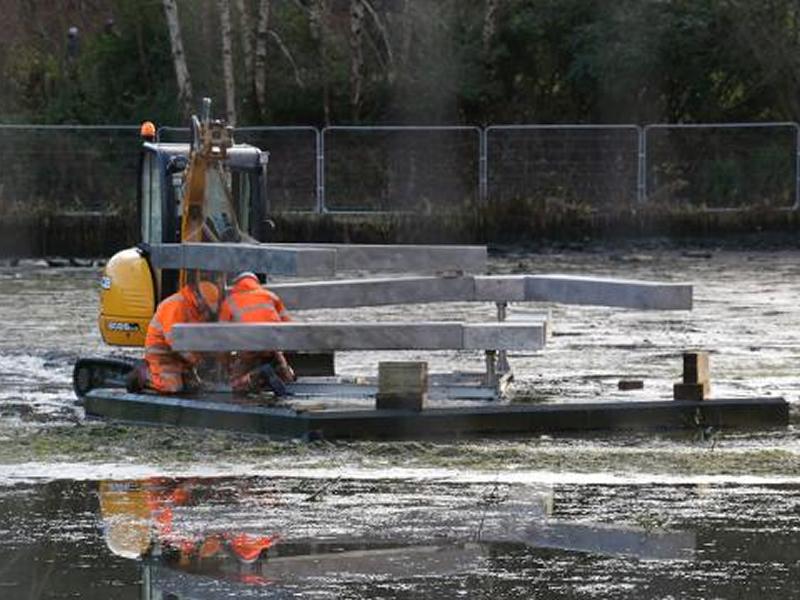 The stainless-steel version of the kinetic art piece, Three Right Angles Horizontal, was removed from Festival Park in June 1994 after one month on public display as it had become a piece of play equipment for local children. The three large L-shapes that make up the sculpture all revolve through 360 degrees, but after just 24 hours in Festival Park the decision was taken to immobilise the piece.

Rickey, an American who spent much of his childhood growing up in Helensburgh, later expressed his fear the sculpture had been smashed up and a myth developed that the piece had been lost. However, the 'Triple L' had actually gone into safe storage in Bellahouston Park, before being moved to a facility in East Kilbride.

A recent audit confirmed the significant art work remained in the council's possession and efforts got underway to return Triple L to public view. A survey of all city's park was undertaken to find a suitable location and that identified the Queen's Park duck pond as the best option. Three Right Angles Horizontal was always intended to be sited within a still water feature, although it has also been installed on dry land.

With the pond at Queen's Park fully drained, work to attach the sculpture to a ready made plinth has now been completed. The pond will be refilled before safety fencing is removed.

Councillor Anna Richardson, City Convener for Sustainability and Carbon Reduction, expressed her delight that Three Right Angles Horizontal had been returned to public display. She also passed on the council's thanks to George Rickey's son, Philip, who visited Glasgow in 2019 to participate in early work to restore the sculpture.

Councillor Richardson said: "It's fantastic that this wonderful sculpture is back where it belongs - on show for everyone to see. Queen's Park is a great location for the Triple L sculpture and I'm sure it will prove a huge amount of enjoyment for all visitors to the park.

"We are very hopeful where it is sited will help address the issues that led to it being placed in storage in the past. Twenty six years is a long time for the sculpture to out of sight, but everyone involved in the project has done a tremendous job to ensure Triple L can now be seen as was always intended by the artist.

"We are also very grateful to the Rickey family, who have been directly involved in the work to ensure Three Right Angles Horizontal is treated with the care that befits an artist of George Rickey's stature."

Three Right Angles Horizontal originally formed part of a major exhibition of Rickey's work that was held in Glasgow in 1982, which was the year of his 75th birthday. Over fifty pieces were shown in the former St Enoch Exhibition Centre and along the north bank of the River Clyde at Clyde Street, which had become open ground after quayside buildings were demolished. At that time, Three Right Angles Horizontal was made of wood but soon after needed repairs.

By 1988, with the wooden version deteriorating badly, it was agreed that a metal version be cast as a replacement. Thanks to a donation of steel plate from British Steel, the Scottish Sculpture Workshop in Huntly created a new version, which was eventually purchased by the then Glasgow District Council in November 1991.

George Rickey subsequently received a Lord Provost's Award for Service to the Visual Arts in 1996 but died in 2002, aged 95.

His work continues to be highly prized around the world with 80 pieces on public display in Germany alone. Another of his kinetic sculptures 'Three Squares Gyratory 1' can be seen in the West Quadrangle at Glasgow University while his work can also be seen at the Scottish National Gallery of Modern Art in Edinburgh.