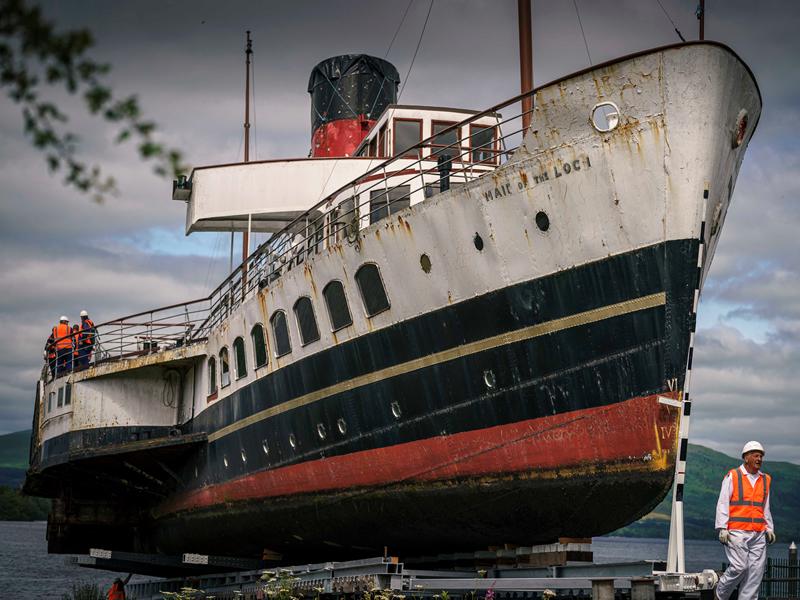 The slipping saw the 191-foot-long, 430-tonne paddle steamer hauled out of the water by the original steam powered winch in its A-listed winch house and onto the 120-year old Balloch Slipway. Now on the slipway, urgent repairs to replace steel beneath the boiler room will be carried out following a full ultrasound survey of the hull, which will provide a definitive report on its current condition. Funding permitting, a refurbishment of the starboard paddle box will also be carried out before the ship is repainted in her original ‘white goddess’ colour scheme, with yellow funnel and green waterline.

The operation follows more than two years of planning following an unsuccessful winching operation in January 2019 which saw the original carriage of the Category A listed slipway fail and the ship slip back into the water.

A new specially built articulated carriage incorporating many components from the 1901 original has since been designed by structural engineers David Narro Associates, and a dedicated team of volunteers, led by project manager and engineering director Jim Mitchell, have spent more than 40 weeks clearing away the old structure, building the new one along with the installation of a new 100 tonne haulage rope. The project has been funded by Historic Environment Scotland and the Architectural Heritage Fund.

Iain Robertson, Chairman of the Loch Lomond Steamship Company, said: “The ship will dwarf everything around her, and the ingenuity behind pulling a 430-tonne paddle steamer out of the water really is a must-see spectacle. This is a momentous occasion and we are confident that the new carriage will deliver a successful operation and a huge step forward in the ship’s restoration.

“As a charity run by volunteers, we are incredibly humbled that we are able to slip the ship with this new and improved equipment, which wouldn’t be possible without the many generous donations and hard-working volunteers. Everyone involved has worked tirelessly to build the new carriage and we’re hugely excited to see the ship out the water for only the second time in 40 years.”

The procedure is expected to take up to four hours to complete, and it is hoped the subsequent work will ensure the Maid – which carried her first load of passengers on Loch Lomond 68 years ago – will then be in sound condition to continue her journey towards sailing on Loch Lomond once again.

Once on the slipway, a programme of activities will take place throughout the summer, including creative and industrial craft events and workshops for visitors. Ship on the Slip also plan to offer specially guided hard hat tours aboard the paddle steamer, as well as events to celebrate the opening of the new Visitor Centre, which explores the themes and stories from the golden age of shipbuilding.