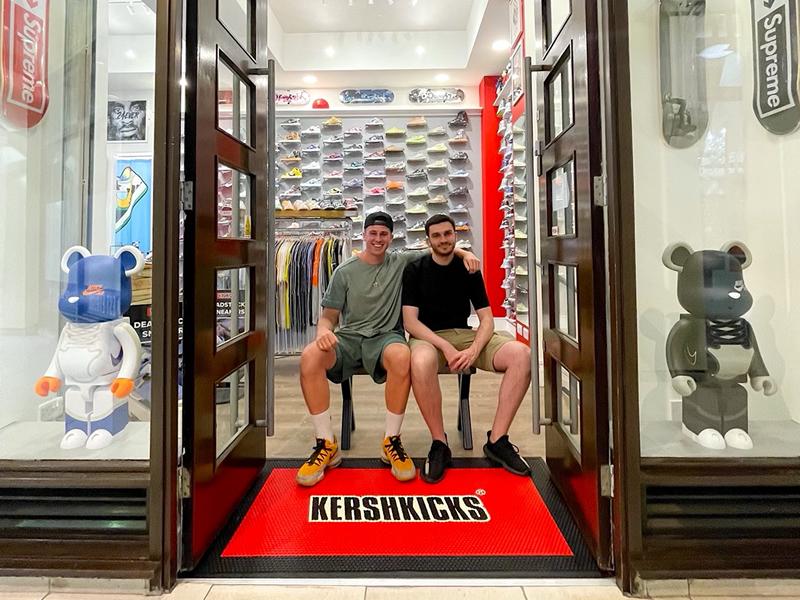 Launched by brothers Ben and Sam Kersh, KershKicks is Scotland’s first specialist sneaker store, giving shoppers the chance to get their hands on a wide range of luxury sneakers, including rare and exclusive limited editions, streetwear and deadstock collections.

The premium sneaker trend is one that has gained momentum across the UK in recent years, with Brits’ appetite for the latest kicks now quickly catching up to that of shoppers in the United States where the trend first began. In previous years, UK sneaker fans looking to snap up the season’s hottest sneaks had no other choice but to head online. However, shops like KershKicks now offer them the opportunity to head instore to treat themselves to something special.

The Glasgow store marks KershKicks’ second launch following the success of its Manchester store, which opened its doors in 2019. Based in The Italian Centre on Ingram Street the new store is also set to bring over 10 jobs to the city, with plans for further recruits over the coming months.

Commenting on their Glasgow launch and why they chose the city for their second store, KershKicks co-founder, Ben Kersh, said: “We’ve visited Glasgow many times over the years and it really is a fantastic city with a great vibe. Over the years we’ve seen a rise in online orders from people living in Scotland, particularly Glasgow, and last year we asked our Instagram followers where they thought we should launch next. Glasgow proved to be a popular suggestion, so it’s great to be able to honour their requests.

“Our store in Manchester has only been open for two years but it has already proven to be a go-to for sneaker fans, including a selection of football stars, musicians and celebrities, so we’re excited about bringing that same energy to Glasgow too.”

Brother and co-founder Sam Kersh, added: “Streetwear and sneakers have been a passion of ours for so many years now, and KershKicks is a vision myself and Ben have been working on since 2014 when I was living at the epicentre of the sneaker scene in the US. After I moved back to the UK, we wanted to bring a little piece of that scene back with us as we knew there were others, like us, that had a love for luxury sneakers. That’s how KershKicks was born and is the ethos we pride ourselves on – being able to give sneaker-heads something special, right here in the UK.

“It’s a really exciting time for KershKicks and we’re looking forward to bringing luxury footwear to Glasgow the KershKicks way and to welcoming fellow sneaker fans from across the city through our doors.”