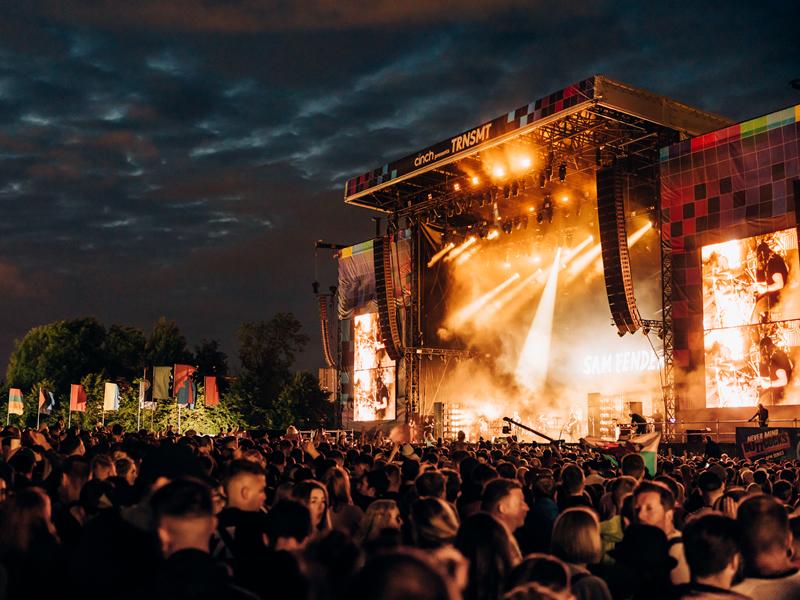 The opening day of Scotland’s biggest music festival was positively jam-packed with outstanding performances from the moment the gates opened until the sun set, with the likes of Courteeners, Little Simz, Sam Fender, Joy Crookes, Inhaler, AJ Tracey, Griff and even more, all making up for lost time and finally reuniting with the Scottish crowd, with more than a few kilts making an appearance.

Festival Director Geoff Ellis said: “It’s absolutely incredible to be back. So much work has gone into making this weekend happen and it was a pretty amazing moment when we opened the gates earlier today.

“The festival means so much to people and it really reminds you how much we’ve all missed live music. You can see that from the crowd’s reaction so it’s amazing be able to offer their first gig experience in such a long time.

“There’s an action-packed few days ahead and a real buzz of energy right across the city. With artists including Liam Gallagher, Primal Scream, Chemical Brothers and Amy McDonald still to take the stage, there’s nowhere else I’d rather be this weekend.”

Today, the festival received notice that they have achieved gold status from Attitude in Everything, following continual improvements over the years to make cinch presents TRNSMT as accessible and inclusive for everyone attending.

Louise Hutchison, Accessible Co-Ordinator for cinch presents TRNSMT said: “We’re absolutely delighted to be recognised as the first music festival in Scotland to be awarded Gold by Attitude is Everything for our work to make cinch presents TRNSMT more accessible and inclusive. Live music is really important for everybody and we’re incredibly proud to have created a festival built on equality.”

With a weekend of celebration ahead which will see over 70 acts perform across 3 stages, fans’ excitement and enthusiasm at returning to the festival was palpable, as the city-centre site once again heard live music ring out across the arena. Brand new for cinch presents TRNSMT 2021, there was an extraordinary culinary line-up at Big Feed on Tour, with fans sampling everything from local Scottish produce at Rost or vegan bakes at Hector & Harriet. The vibrant atmosphere continued at the Boogie Bar where the crowd could check out DJ sets from Nightwave or TAALLIAH, or for a more chilled out experience, fans headed to the brand-new Wellbeing Area, where they could take a break or speak to trained volunteers if required.

Experiencing the magic only a Scottish crowd can bring, Friday night’s headliners Courteeners walked onto the Main Stage with bagpipes playing 'Flower of Scotland', whilst frontman Liam Fray rocked a red tartan kilt. As the fans sang along every word, the band performed hit after hit including indie-rock classics ‘Not Nineteen Forever’ and ‘Are You In Love With A Notion?’. Renowned for their electrifying live shows, the Manchester outfit gave everything they had to the cinch presents TRNSMT crowd, with Liam Fray saying “You've always treated us as one of your own!”. A home away from home for the band, Glasgow welcomed Courteeners back with open arms tonight, kicking off what is set to be an extraordinary weekend of live music at TRNSMT.

Indie-rock heavyweights Blossoms received a huge amount of love on the opening day as they played festival favourites ‘Your Girlfriend’, ‘There’s a Reason Why’ and ‘I Can’t Stand It’. Sam Fender made a glorious return to Glasgow, saying, “Scotland is like a second home to us!”. Playing songs like ‘Will We Talk in the Morning’ and ‘Dead Boys’ the North Shields singer spoiled adoring fans with a special tribute to Bruce Springsteen as he sang ‘Dancing in the Dark’, cracking jokes that he played it with “the most out of tune guitar”. That certainly didn’t stop the crowd from singing their hearts out alongside Sam.

Alt-rockers Sports Team opened proceedings on the Main Stage with lead singer Alex Rice paying homage to Scottish fans in a kilt and dedicating a song to The Snuts, before a euphoric performance from House Gospel Choir who warmed up the crowd and had them belting out iconic dance tunes including ‘Show Me Love’. Yxng Bane and AJ Tracey performed outstanding sets, delivering huge tunes ‘Ladbroke Grove’ and ‘Thiago Silva’ to the party, with AJ Tracey claiming that the TRNSMT crowd had “WAY better energy than London”. Dublin band Inhaler, who recently landed the UK No1 spot for their debut album, moved up the bill and delighted fans with opening song ‘It Won’t Always Be Like This’. As the sun began to make an appearance on the Green, the Dublin boys greeted the crowd and dedicated their third song to Scottish fans who they recently met whilst travelling.

Friday’s King Tut’s Stage line up saw a host of award winners perform; from Mercury Prize Shortlisted Berywn, Ivor Novello nominee Holly Humberstone and BRITs Rising Star Winner Griff who played her first ever show outside of London, performing songs like ‘One Night’ and chart hit ‘Black Hole’. Fellow BRITs Nominee Joy Crookes also paid homage to her Scottish fans wearing a kilt skirt and Scottish flag, captivating the crowd with ‘Feet Don’t Fail Me Now’. Headlining the stage on Friday night was none other than 2020 Ivor Novello winner Little Simz, treating the crowd to hits including ‘Venom’ and ‘Selfish’ plus hits from her critically-acclaimed new release ‘Sometimes I Might Be Introvert’. The North London rapper said, “I’m so happy to be here. It should have been last year, but we’re here now!”

Over on the River Stage, fans could catch the musicians destined to be headlining festival stages in the coming years. An exhilarating headline set from Glasgow band The Ninth Wave was a particular highlight, alongside performances from Walt Disco, VLURE and many more.

Everyone attending must provide proof of a negative lateral flow test which has been taken no more than 48 hours before arriving at the event. The festival is also reminding anyone with tickets for multiple days they must complete another test to ensure results are never any older than 48 hours old.

The next two days will see headliners Liam Gallagher and The Chemical Brothers entertain crowds at Glasgow Green, plus hometown sets from Primal Scream, Twin Atlantic, Amy Macdonald and many more. As the sun sets on the first day back, and after two long years... it’s clear that cinch presents TRNSMT 2021 was worth the wait.