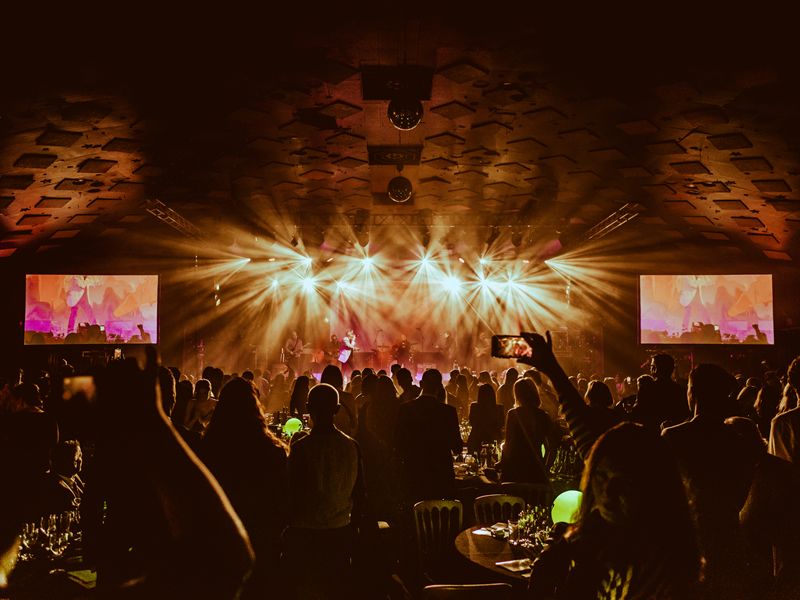 Nordoff Robbins are delighted to reveal the Specsavers Scottish Music Awards raised over £180,000 on Saturday evening as one of the biggest industry events of the year made a welcomed return to Glasgow’s Barrowland Ballroom following last year’s virtual award show. The flagship event saw some of Scotland’s greatest talents take to the stage to perform, including Wet Wet Wet, Amy Macdonald, Nina Nesbitt, The Fratellis, Nathan Evans, The Bluebells and more.

Forced to move online in 2020 during the COVID-19 pandemic, the 2021 event marked an extra special night as the country’s music scene united once more to celebrate. Nordoff Robbins’ fundraising was decimated for 2020, resulting in their forecast for 2021 only reaching 40% of their pre-covid income, however despite this huge reduction in income, their services are needed now more than ever. In addition to the incredible amount raised from the Spescsavers Scottish Music Awards this weekend, headline sponsors Specsavers are donating a further £15,000 to Nordoff Robbins this year, to help four key projects in Scotland, including Blythswood House, Calaiswood After School Club, Sight Scotland and St Andrew’s Hospice. These invaluable donations help Nordoff Robbins meet the need as and where they can - whether online or face-to-face.

Sandra Schembri, CEO Nordoff Robbins Music Therapy charity said, “We are so grateful for the continuing support shown through the Scottish music industry and to everyone who makes the Specsavers Scottish Music awards happen each year.

“The past 18 months have been tough for everyone, but even more so for our clients. The incredible amount raised this evening will allow us to continue to support some of the most vulnerable and isolated members in our communities through our music therapy.

“At Nordoff Robbins we see music as a superpower to heal and connect, and it is through events like these that make it possible for us to continue our valuable work across Scotland.

“On behalf of Nordoff Robbins, I would like to share our thanks to Donald McLeod MBE for everything, Edith Bowman for hosting the evening and being the amazing ambassador for our work she is and to our incredible sponsors and artists whose valued support made this night possible.”

Susanne Akil, Specsavers’ Scottish chair said, “While the Scottish Music Awards is a fantastic celebration of Scottish music, it’s important to remember that it also supports a charity that offers a vital service to so many.

“Our stores across Scotland, plus our audiology and Home Visits services, joined together to donate £15,000 collectively and we’re delighted that this will cover the costs of more than 600 music therapy sessions for four projects Nordoff Robbins supports across Scotland.”

A night of glitz and glam, the Specsavers Scottish Music Awards was hosted by Edith Bowman in one of the city's most iconic music venues, The Barrowland Ballroom, for the first time ever. The venue has played host to some of the greatests artists in the world and was filled with the most outstanding talent Scotland has to offer on Saturday night, with incredible performances from breakthrough artists Brooke Combe and Bow Anderson, a huge crowd singalong to The Fratellis' renditions of 'Yes Sir, I Can Boogie' and 'Chelsea Dagger', and postman turned singer Nathan Evans performing his viral hit 'Wellerman - Sea Shanty'. Amy Macdonald opened proceedings with classic hit 'This Is The Life' while hometown heroes Wet Wet Wet closed the show in outstanding fashion, treating the Specsavers Scottish Music Awards crowd to non-stop fan favourites including 'Goodnight Girl' and 'Love Is All Around'.

Highlights from the event included performances from the likes of Nina Nesbitt, who picked up ROX - Diamonds & Thrills Women in Music Award. The Edinburgh singer treated the crowd to some of her iconic tunes like ‘The Best You Had’ and latest single, ‘Life’s A B***h’. Specsavers Scottish Music Awards also shone a light on some of the most exciting rising stars in Scotland, including Bow Anderson who won Best Pop Act sponsored by Pizza Express alongside Brooke Combe who had the whole venue on their feet during her performance. The 21 year-old singer bagged Best Female Breakthrough Award sponsored by Tennent’s Light.

Taking home Best Male Breakthrough Award sponsored by Dirt Comms & KHOLE, Nathan Evans performed his viral rendition of ‘Wellerman – Sea Shanty’ and had the Barrowlands singing their hearts out. The postman-turned-singer said, “This is absolutely mental - 11 months ago I was a postman! Thank you to everyone that’s supported me this far… I’m just baffled.”

It was a big night for the bands as the likes of Biffy Clyro picked up Ticketmaster’s Best Live Award alongside The Snuts who took home guitarguitar’s Best Album Award. The Bluebells made a long awaited return to the Barrowlands, renowned for being one of the country’s best indie bands, The Bluebells were awarded the Legend Award sponsored by Sir Reo Stakis Foundation. With the crowd fully warmed up, The Fratellis took to the stage playing two massive tunes 'Yes Sir, I Can Boogie' and 'Chelsea Dagger' after winning King Tut’s Wah Wah Hut Songwriting Award.

Closing out the show after an incredible evening of non-stop music, it was finally time for Wet Wet Wet to take to the stage. The band have a long history of supporting Nordoff Robbins music therapy work, having won their very first Silver Clef award in London back in 1988 when they were brand new on the scene. They’ve gone on to support the charity via fundraising shows, albums and videos and have even visited Nordoff Robbins centres across the country. Honoured with the Icon Award sponsored by Raymond Weil, Wet Wet Wet closed the evening of celebration with classic anthems like 'Goodnight Girl' and 'Love Is All Around', making it an unmissable night at the Specsavers Scottish Music Awards.

After almost two years without a live event, Specsavers Scottish Music Awards was a resounding success at The Barrowland Ballroom as it raised an incredible amount of vital funds for Nordoff Robbins. For more information on the music therapy charity, visit www.nordoff-robbins.org.uk.