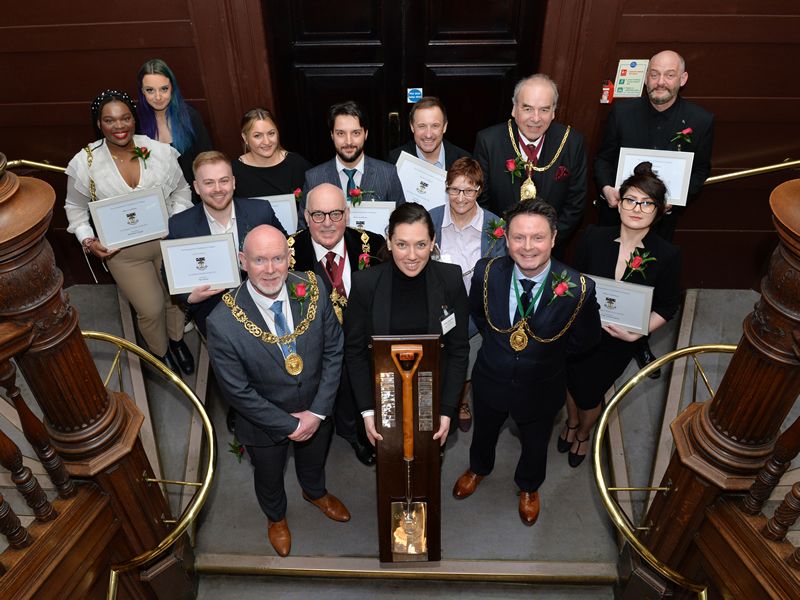 The five-star hotel picked up the overall prize of The Robertson Silver Spade on top of a gold award for the floral displays at the hotel.

Commenting on the awards, Mafalda Albuquerque, General Manager, Kimpton Blythswood Square Hotel, said: “We are thrilled to be awarded gold and the overall prize of The Robertson Silver Spade at the Let Glasgow Flourish awards. At the hotel, we’ve always prided ourselves on our floral displays and window boxes as we want to create an exciting visual experience for guests entering the hotel and ensure they enjoy the views over Blythswood Square Gardens.”

The Incorporation of Gardeners of Glasgow Deacon, Lorne Scott, and Lord Provost Philip Braat presented the winners with their awards at The Trades Hall. The awards have been run by The Incorporation of Gardeners of Glasgow since 1983 and certificates are presented to businesses and organisations within the city which create and maintain arboreal or floral displays of high standard for the benefit of the public. The awards are made to projects from simple window boxes to impressive and ambitious gardens.

Members of the Master Court usually explore most of Glasgow during the first two weeks in August when the flowers are in full bloom but due to the pandemic, only the G1 and G2 postcodes were judged in 2021. Businesses and organisation do not know they have been judged or are prize winners until they are contacted by the Clerk of the Incorporation of Gardeners of Glasgow inviting them to the Award Ceremony to collect their prize. They do not know the actual prize they have won until the day. The Robertson Silver Spade is given to the winner and retained for a year; trophies and certificates are given to gold award winners and silver and bronze winners are given certificates.

This year's big winner was the Kimpton Blythswood Square Hotel who received a gold award and were the overall winners of The Robertson Silver Spade. The hotel was praised for their window boxes and floral displays. The hotel is also part of the Owners’ Association responsible for the beautiful Blythswood Gardens, adjacent to the hotel, which won a silver award.

Other big winners from the hospitality industry were The Citizen Restaurant in St Vincent Place and Amore Ristorante e Pizzeria in Ingram Street who were both awarded gold for their floral displays.

Many hospitality businesses in the city were awarded Silver including Hengler’s Pub in Sauchiehall Street; The Counting House; La Vita and The Piper Whisky Bar - all based in and around George Square - and Merchant Chippie on High Street.

1930s Art Deco bar, Steps Bar in Glassford Street was awarded a bronze award for its stunning hanging baskets which help to add colour to the local area.

Commenting on the awards, Lorne Scott, Deacon of Incorporation of Gardeners said: “We're thrilled to present this year's Let Glasgow Flourish Awards. Congratulations to all the winners and huge thanks to them for helping to make our city a blooming and welcoming place for visitors and locals to enjoy.”