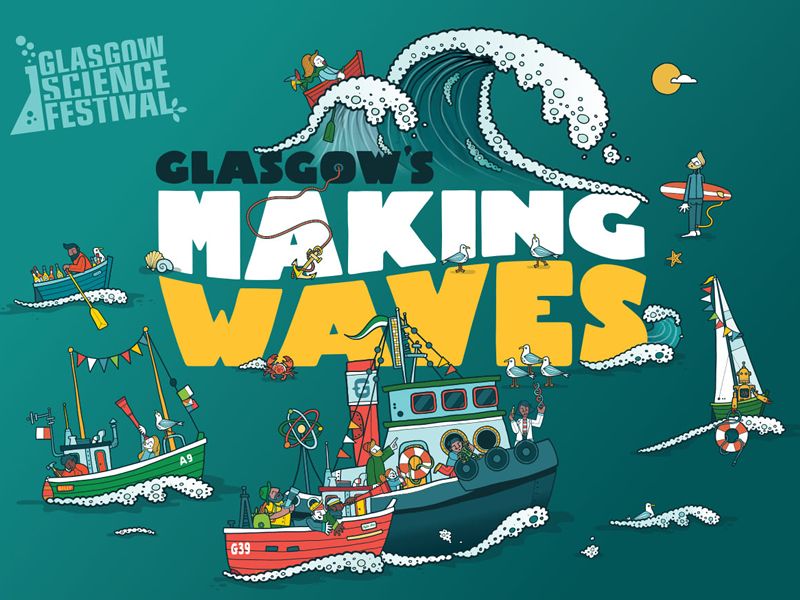 Venues across the city including the Glasgow Botanic Gardens, the Riverside Museum and the St Enoch Centre will play host to more than 50 live events during the 16th annual festival, which kicks off on Thursday 2nd June.

The online Science on the Sofa activity programme, established following the cancellation of planned physical events for the 2020 festival, will also return for a third year to help bring science into the home.

Visitors can look forward to a varied selection of wave-themed events, including investigations of gravitational wave astronomy, artist-led soundwalks, explanations of how different types of waves manifest in the natural world, and a striking sculpture of a basking shark made from e-waste.

There’s an equally varied range of other topics to explore, including the rhythms of the brain, how AI can deliver improved healthcare, and how plant science can help mitigate climate change.

The events will be delivered by researchers from universities across the west of Scotland and elsewhere, alongside local community groups, museums and other organisations.

Dr Deborah McNeill, organiser of the Glasgow Science Festival, said: “We’re really proud of what we’ve been able to accomplish over the last couple of years despite the restrictions of the pandemic.

“Our online festival in 2020 and our partially in-person events last year proved very popular and showed that there was still a real demand from people across the city for what the Glasgow Science Festival offers.

“We’ve worked really hard to make sure that this year’s festival rewards that enthusiasm with an expanded programme of in-person events which can be safely delivered at locations across the city.

“There’s still a real interest in online activities, both from local people and from visitors around the world, so we’ve made sure that we can also offer a month-long series of home experiments and video content that people can engage with whenever they want to.

“We’ve developed a really varied programme that we’re sure will have something for science enthusiasts of all ages to see, do and learn from. We can’t wait to welcome people back.”

Highlights of the in-person Glasgow Science Festival programme include:

Particle/Wave, an immersive fulldome film presented at the Glasgow Science Centre which weaves music, poetry, arts, and science to tell the story of gravitational waves from prediction to detection. Artist Alicia Sometimes and University of Glasgow astronomer Prof Martin Hendry will explore this new way of seeing the Universe.

Glasgow Science Festival at the Botanic Gardens, a series of daily events at the Botanics between Tuesday 7th and Sunday 12th June. Activities include making bath-bombs and rainbow, creating botanical blueprint collages, science tattoos, and opportunities to lean all about the germs, viruses and amoebas in the Gardens and the human body.

Sound Thought, a curated soundwalk of locations around the West End of Glasgow, exploring notions of acoustic ecology and the impact of humans and noise pollution on our local environments. Each composer/sound artist has prepared a soundscape composition for a specific location in Glasgow’s West End which can be enjoyed as part of a self-led tour.

Devouring Technology, a sculpture of a basking shark made from electronic waste created by artist Jonathan Elder and CCL North. On display at the St Enoch Centre throughout the festival, the shark (affectionately dubbed Betty) aims to demonstrate the colossal scale of the electronic waste problem in Scotland.

Some of the activities available from Science on the Sofa will include:

Brain Wave Cruise Photo Tour, a visual journey through brain waves prepared by researchers from the University of Edinburgh. Participants can explore fascinating shapes and take pictures of brain waves.

STEM on a Shoestring, from the University of Strathclyde, which will allow participants to catch a rainbow using nail polish, make their own holograms in the palm of their hands or build their own fibre optic camera using nothing more than an empty toilet.

Spot-A-Bee: Sign up to be part of an online survey of bee habitats to help scientists from the University of Glasgow develop a better understanding of these critically-important insects, whose numbers are in drastic decline.

The in-person portion of the Glasgow Science Festival will run from Thursday 2nd June to Sunday 12th June, with most events being free of charge. Science on the Sofa activities will be available on the Festival’s website from launch until Thursday 30th June.