The countdown is well and truly on, with only 4 weeks to go until Scotland's largest celebration of craft beer is set to welcome thousands of fans from around the country to a craft beer haven at SWG3 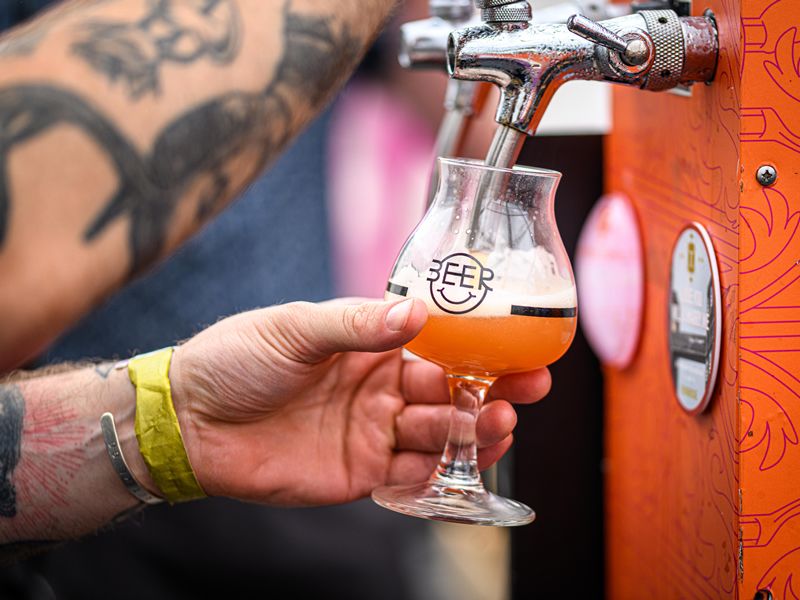 Co-founder of We Are Beer, Greg Wells said: “The countdown is well and truly on for Glasgow’s first Craft Beer Festival and we’re thrilled to announce so many incredible Scottish breweries today. It’s important to us to shine a light on the best breweries in the world and Scotland’s are certainly up there with the very best of them. From Jump Ship’s excellent range of no and low beers, to Fyne Ales family-brewed lager, there’s an abundance of talent in Scotland’s brewery scene.

“We hope festival fans will take this chance to step outside of their comfort zone and possibly discover their new favourite beer and hear some of the amazing stories these brewers have to tell at Glasgow Craft Beer Festival in just under 4 weeks.”

Tickets include ALL your beer for the session - allowing you to try a selection of the world’s finest beer and find your perfect match. Available via glasgowcraftbeerfestival.co.uk

An epic line up of craft beer, good tunes and great food, the weekend festival is set to take over iconic venue SWG3 in Glasgow’s West End from 8 - 9 July, hosting music from Glasgow legends Optimo, Greg Wilson and Huey Morgan with food pop-ups from El Perro Negro, Babos and Beirm.

A homecoming of sorts for Sub Club duo Optimo, Glasgow Craft Beer Festival will be the site of an epic celebration of 25 years of Optimo’s club night, long credited for defining Glasgow’s unrivalled electronic music scene. The duo will take to the decks alongside Hacienda mainstay Greg Wilson, who brings 40 years of non-stop, dancefloor fillers to the event. Rounding off an exciting music line up for the festival is former Fun Lovin’ Criminals frontman Huey Morgan, with the DJ and radio presenter well-versed in entertaining festival crowds around the world.

Shining a light on Scotland’s eclectic brewery scene, Glasgow Craft Beer Festival has added multiple new homegrown breweries to the line-up, including family owned Scottish farm brewery Fyne Ales, hailing from Argyll. With their brewhouses and taproom nestled amidst a 4500 acre working farm at Loch Fyne, the award winning brewery is sure to delight beer fans across the country at SWG3 in June.

Edinburgh’s Jump Ship created an alcohol free lager which was named as the best in the world at the World Beer Awards in 2021, and in 2022, the brewery will showcase their award-winning hops at Glasgow Craft Beer Festival. The alcohol free brewery was the brainchild of founder Sonja Mitchell , born from a love of beer and hatred for hangovers. The brewery has gone from strength to strength since its inception in 2019, creating no-alcohol fruity summer sours and lively lagers.

Established as the UK’s first exclusively gluten-free craft brewery, Bellfield Brewery will bring their expansive list of gluten-free craft beer to the festival, pouring everything from classic IPAs, hoppy ales and crisp, refreshing and perfectly balanced lagers and pilsners.The independent Edinburgh brewery will join the Scottish contingent alongside Dundee’s 71 Brewing, who perfect small batch brews and crisp lagers. Dundee’s first active brewery in over 50 years, the company embraces modern brewing techniques blended with traditional European styles for a superior beer. Dalkeith’s Otherworld Brewing will also pour their highly hopped and fruited beers at the festival, perfecting barrel aged and funked up styles with a modern twist.

One of Glasgow Craft Beer Festival’s key benefits for beer fans is that ALL beer is included in your ticket, so fans can feel free to experiment and find their new favourite beer. For those with a sweet tooth, the addition of Amundsen Brewery means beer fans can try out the brewery’s famous ‘Pastry World’ beers - stouts and sours that taste like desserts. Combining beer with dessert is no mean feat, yet Amundsen have brewed epic flavours like Pecan & Maple Pie, Triple Berry Pavlova and even Mocha Ice Cream Fudge Cake.

Also added to today’s brewery line up are Liverpool’s Black Lodge and Welsh brewery Tiny Rebel. They join over 35 breweries from around the world who will pour at SWG3 in Glasgow’s West End in just under 4 weeks.

Festival fans can quench their thirst with lagers and IPAs, or even chocolate flavoured stouts, as well as enjoying a culinary feast from Glasgow’s very best chefs. Winners of the UK National Burger Awards in 2019 and 2021, El Perro Negro bring their famous grass-fed beef burgers to the festival alongside southside toastie supremos Babos and pizza specialists Beirm.

Whether you’re brand new to craft beer, or know your IPAs from your stouts, the two-day festival is a world of discovery and diversity. Internationally renowned venue SWG3 will host Scotland’s biggest craft beer festival from 8 - 9 July 2022, featuring an unrivalled list of breweries and beers from around the world, outstanding DJ sets and delicious food, all under one roof in Glasgow’s buzzing West End.

Don’t miss out - buy tickets and sign up at glasgowcraftbeerfestival.co.uk