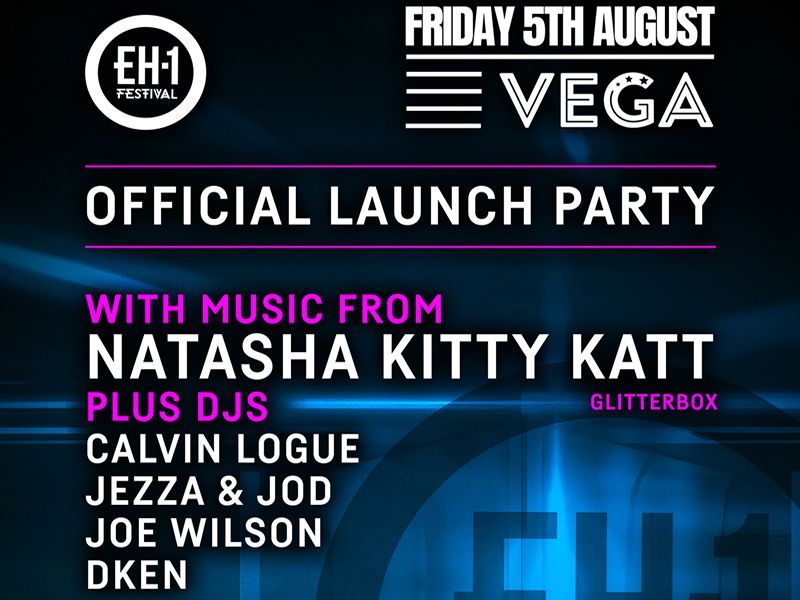 One of Scotland’s most exciting music festivals, EH1 is set to take over Glasgow venue VEGA with an official launch party, bringing together DJs from Scotland’s most popular club nights including Glitterbox, PRTY and EVOLATION. The free event will see DJs including Natasha Kitty Katt, Calvin Logue, Jezza & Jod and many more officially start the countdown to EH1 Festival, with ticket and merchandise giveaways on the night, as VEGA guests rub shoulders with Scotland’s biggest and best DJs.

The road to EH1 Festival begins at VEGA, YOTEL Glasgow’s rooftop bar and restaurant, Friday 5th August from 8pm. Guests can book a table for FREE to guarantee their spot - book now at vegaglasgow.com. EH1’s launch party is open to all - walk-ins welcome on the night but guests are encouraged to arrive early to avoid disappointment.

Set to be a launch party like no other, EH1’s takeover of VEGA will include sets from Glitterbox favourite and disco queen Natasha Kitty Kat, EVOLATION’s rising stars Calvin Logue and Joe Wilson, plus PRTY’s Jezza & Jod and DKEN. The line-up will soundtrack a night of EH1 ticket and merchandise giveaways, as the festival officially counts down to the main event in VEGA’s star-studded venue, giving guests a taste of what to expect in September.

Natasha Kitty Kat said: “I can’t wait to bring the Glitterbox vibes to VEGA for the EH1 launch party, and give party goers a taste of what they can expect from my set at the main event in September!”

Nightlife phenomenon Glitterbox will bring White Isle energy to VEGA’s rooftop venue this summer, whilst Edinburgh club night Evolve and Evolution have joined forces to create EVOLATION and Glasgow club sensations PRTY will spotlight the best underground talent the country has to offer.

Disco queen and all-round superstar DJ Natasha Kitty Kat will headline the party, bringing Glitterbox’s world-renowned inclusive, party atmosphere to YOTEL Glasgow’s rooftop. Taking over venues from Ibiza to New York, Glitterbox will arrive in Glasgow, known for showcasing some of the world’s most respected DJs alongside emerging talent, as the club night prepares to host its own arena at EH1 Festival this September, for what will be its Edinburgh debut.

The music will continue until midnight, as the launch party will welcome DJs including Calvin Logue, Jezza & Jod, Joe Wilson and DKEN to VEGA’s disco decks.

EH1’s launch party will showcase the very best the Edinburgh music festival has to offer, giving guests a taste of what to expect from a day of non-stop music at the Royal Highland Centre in September. Free entry and open to all, the festival launch party will see guests sip on cosmic cocktails, taking in Glasgow’s stunning skyline from VEGA’s floor to ceiling windows, soundtracked by an outstanding DJ line-up. Guests can enjoy an array of VEGA’s refreshing cocktails, from the classic Red Dust; Absolut Raspberry, elderflower and prosecco topped with a sprinkling of red dust, or Gutterball, a blend of Beefeater Gin, mint, ginger and lime.

Named after one of the brightest stars in the universe, VEGA has brightened up Glasgow’s night time economy over the past year, with 13,700 square feet of rooftop space and stand-out offerings including an immersive disco lift, monthly disco brunches and its very own ten-pin bowling alley.

For more information or to make a booking at VEGA, visit vegaglasgow.com or email vega@yotel.com

For more information or to make a booking at YOTEL Glasgow, visit yotel.com

To learn more about YOTEL Glasgow and VEGA, follow: @yotelglasgow and @vegaglasgow