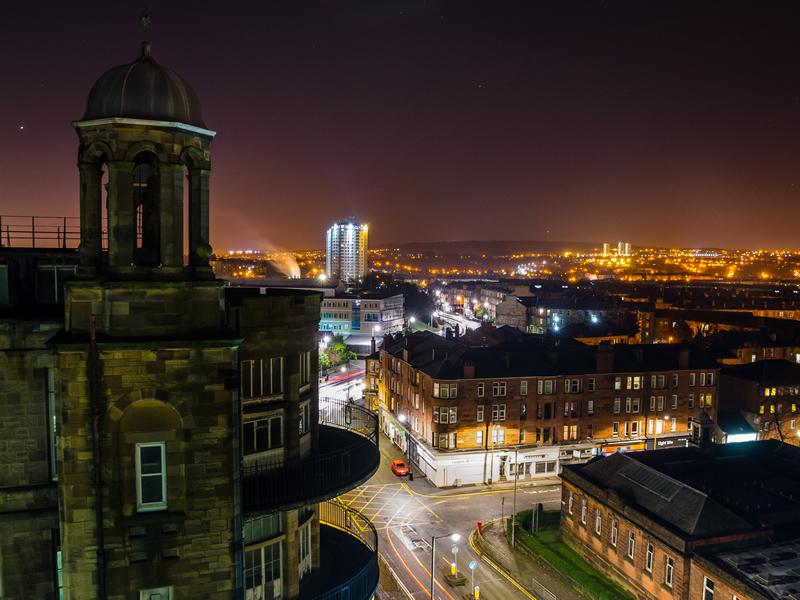 Going in to their 7th Festival in 2019, Southside fringe has played a blinder with 35 Southside venues hosting a programme of over 150 events between May 10th to 26th!

The festival finally have their own year round base, On The Fringe in Shawlands Shopping Centre. Opening up the space as an arts hub, it’s already busy with gigs, volunteer training, workshops, rehearsals and meetings. This year the team at the festival ran a photography competition to get the community involved in the design of the programme. This was won by Stefan Krajcik, we think you will all agree that his view of Battlefield from the Old Victoria Hospital is astounding! All the entrants submissions will be on display in On The Fringe for the duration of the festival. The festival are realising their long held dream of opening Southside Fringe with a midday parade in Shawlands on Saturday the 11th May - Southside Fiesta!

Looking for comedy? Scott Cappuro on Friday 10th May treats us to his comedy genius at the Glad Café. For some family friendly comedy check out Dr Jones Funny Bones at the Cellar on the 18th, with fascinating facts and disgusting ones too...

The Fringe are excited to include listings from the Take Me Somewhere Festival at the Tramway this year, with The Famous Lauren Barri Holstein – Notorious on the 11th of May plunging the audience into the ghostly underworld of popular culture and examining the myth of Medusa. On the 16th May in Mette Ingvartsen - 21 Pornographies, Danish choreographer and dancer Mette Ingvartsen examines the powers of pleasure and the pleasures of power.

For lovers of literature it’s recommended you join author Claire Casey for Ravens on the 18th of May at On The Fringe as she reads from Ravensrise, the first novel in her fantasy trilogy. On the 23rd of May we find Four Blokes in Search of a Plot at The Cellar Southside, four writers who happen to be blokes create a crime story before your eyes.

For theatre goers, World Spirit Theatre ask Where are you really from? exploring culture, labels and stories of migration on the 18th of May at Pollokshaws Burgh Hall.

And for all the music lovers out there... On the 12th May you can enjoy Sound Collective Scotland at Pollokshields Burgh Halls, a vibrant mix of music written by Telemann, Debussy, Poulenc, Thomas and Reinecke.

Or Cordes en Ciel - Airs and Laments (Lute & Voices) on the 19th, also at Shawlands Trinity Church for a dramatic recital of virtuoso vocal and instrumental pieces from the 17th century.

On the 16th May John Maclean Southside Hero is remembered by musicians at the Butterfly & Pig South. This free event launches a campaign to raise awareness of the activism of Southsider John Maclean and is followed up by John Maclean's Southside: A Musical Walking Tour on the 18th & 19th May.

Semispecific Ensemble (live) + Loosen Up DJs sit somewhere between modal jazz and music concrete and you can tune in on the 11th of May at Rum Shack.

Or if a laid back acoustic night is more up your street The Cellar Southside invite you along to Lauren Spiteri Acoustic Set on the 17th of May.

And if it’s A-listers you’re after, get your tickets quickly for Dick Valentine (Electric Six) at the Glad Cafe on Saturday 25th May to hear him play from his extraordinary 5th solo album I Am a Moth, I Am Starving, That’s A Nice Sweater You Got There, Let’s Do This.

You'll find full details of the events above and the rest of this year's programme at http://bit.ly/SSFProgramme