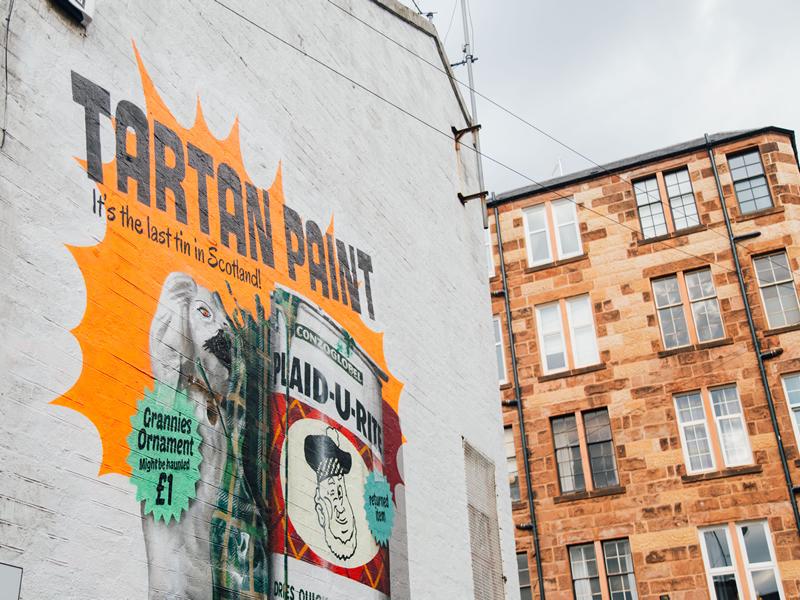 Innis & Gunn has unveiled a brand new mural in Glasgow as part of its month-long Your Call Lager campaign. The Scottish craft brewer has joined forces with Glöbel Bros Signs and Art Pistol to create the masterpiece just seconds from Ashton Lane, home to the newly-refurbished Innis & Gunn Taproom. The people of Glasgow were asked to vote on their favourite design, with Tartan Paint coming out on top. The chosen mural, painted on the wall in Cresswell Lane, trumped Did Ye Aye and Bolt Ya Rocket to win first place.

The mural is the latest in a string of stunts and giveaways with the Your Call campaign now in full swing. Last month, Innis & Gunn pitched up on Buchanan Street for #PeopleMakeGlassGo, which saw the brewer give away 2,000 of its much-admired pint glasses in less than 25 minutes. The city has now been treated to a brand new piece of art in its popular West End, all decided by the people of Glasgow. Ciaran Glöbel of Glöbel Bros Signs and Conzo Throb, known together as ‘Conzo & Glöbel’, regularly team up to create murals together with Tartan Paint being the latest collaboration.

Robb Hamlin, Senior Brand Manager at Innis & Gunn, said: “Glasgow is known for its thriving street art and brilliant murals so we thought why not give the city a wee gift. We put the power in the people’s hands Glasgow has spoken! Winning mural Tartan Paint will be a welcome addition to Cresswell Lane, just a stone’s throw from our new-look Brewery Taproom. We worked with the amazing Conzo & Glöbel and Art Pistol to create something really special with a proper Scottish feel. We love Glasgow so teaming up with talented Glasgow artists was the perfect fit for our lager campaign, which has gone down a treat with beer fans across the city. Keep your eyes peeled to see what else we have in store.”

Ciaran Glöbel, founder of Glöbel Bros Signs, said: Innis & Gunn approached us because they like what we do so it was easy to bounce ideas back and forth. The public vote aspect of the campaign was appropriate because this mural is likely be in existence for years so it’s only fair that Glasgow should have a say in how it looks. Winning design Tartan Paint is a golden nugget of Scottish banter. As young apprentice painters we have long wondered ‘Where is this tartan paint?’ and now we have to opportunity to tell Glasgow WE FOUND IT! THE LAST TIN IN SCOTLAND!

“Let it be known that Conzo & Glöbel are firmly against boring empty walls. It’s a privilege to be able to leave our mark on the streets of our hometown and we try to reflect our Glaswegian sense of humour into the murals we create. If someone walks past one of our murals and cracks a smile then we see that as a job well done.”

The quest to have Scotland's very first ever LEGO set endorsed by the LEGO Ideas Group took one step closer to becoming a reality last week.
Last Updated: 6th August 2020

Inspired by a true story, Everybody's Talking About Jamie is the new award-winning five-star hit musical for today, catch it at the King's Theatre Glasgow in October!

The biggest drag show in the world, RuPaul’s Drag Race: Werq The World, is coming to The SSE Hydro, Glasgow on 16th May 2021!