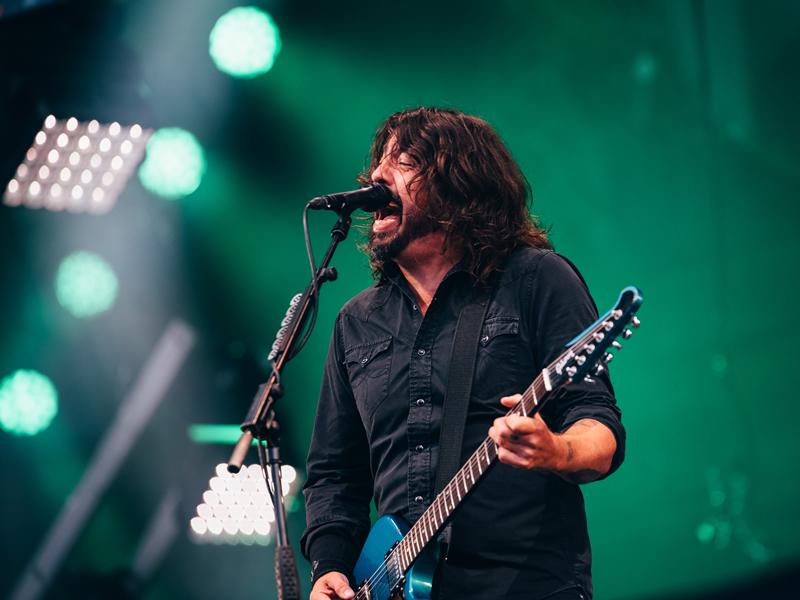 Glasgow Summer Sessions provided fans with yet another incredible day of live music as rock titans Foo Fighters delivered a truly euphoric set of anthemic rock & roll to a sold out crowd at Bellahouston Park, with Dave Grohl saying "How many years since we've been here? We came back to play rock 'n' roll!"

Some set highlights, although hard to pick, include a keyboard and crowd singalong to 'Flower of Scotland', drummer Taylor taking over vocals for a Queen cover of 'Under Pressure' with Dave Grohl on drums, a father-daughter exchange on stage and an AC/DC cover of 'Let There Be Rock' , dedicating the last song 'Everlong' to Scot Ian - Dave's ear monitor tech of 30 years - Dave said, "He's the one I can't do without, so we can sing this one for him!" From classics like ‘Best Of You’ and ‘All My Life’, to singalong anthems simply made for festivals like ‘Everlong’ and ‘Times Like These’, it was another masterclass in festival headlining from Dave Grohl and co.

Making a welcome return to Scottish soil after four years away, the headliner veterans delivered a masterclass performance in front of one of the biggest crowds the festival has ever seen. The party started early, as thousands of fans rocked up to catch an incredible supporting line-up featuring some of the best alt-rock bands the UK has to offer with Slaves, Frank Carter & The Rattlesakes, The Van T’s and Hot Milk all taking to the stage.

Fast-rising Manchester outfit Hot Milk opened the day’s proceedings with an enthralling set that lived up to their burgeoning reputation as one of the most exciting emerging rock acts in the UK. The band are sure to have won over fans in Glasgow in what was another milestone moment in their breakthrough year.

Glasgow band The Van T’s treated their hometown crowd to a fantastic set that aired popular tracks ‘Fresh Meat’ and ‘Suis-Je Cool’. Very much at home on the massive stage, the band’s biggest show to date was a triumph – full of their signature meaty riffs, hard-hitting rhythms and stirring dual vocals. With a sound that is as stirring as it is seismic, it marked the next step in their quest to cement their place among the UK’s elite contingent of rising stars. Clearly enjoying the milestone moment in their hometown, Hannah shouted with a huge smile on her face: “It’s such a pleasure to be here!”

After an incendiary display at last year’s festival, Frank Carter & The Rattlesnakes returned to Bellahouston Park and were on fine form once again. Getting up close and personal with the crowd, Carter rose to the occasion once again with his formidable stage presence and cathartic rock-fuelled anthems. The punk-rockers are known for their unpredictable and impassioned shows and today’s set at Glasgow Summer Sessions was no different. Amidst hits like 'Tyrant Lizard King', 'Butterfly' and 'Wild Flowers', the frontman said "It is our privilege and pleasure to be invited back to Summer Sessions again!"

As the penultimate act of the day, Slaves kept energy levels high by storming the stage with massive tunes from their Mercury-nominated 2015 album ‘Are You Satisfied?’ and 2016’s Top 10 album ‘Take Control’. The punk-rock duo stormed through tracks including 'Sockets', 'Debbie', 'Beauty Quest' and closed with the epic 'The Hunter'.

Then it was time for one of the festival’s biggest headliners in its history as Foo Fighters took to the Bellahouston Park stage for the first time. With their live shows renowned around the world, the crowd’s excitement levels had reached its peak as the rock titans smashed out 'Stacked Actors','The Pretender' and 'Learn To Fly'. Revelling in the electric atmosphere, Dave Grohl said, I'm glad we came back to this place man, it's been too long. We've got 25 years worth of songs to play tonight."

Showcasing exactly why they have become one of the premier rock bands of their generation, Foo Fighters’ two and a half hour set brought spontaneity, enthusiasm and non-stop rock to the sold out festival site.

With only one more festival date of the season to look forward to, fans should grab tickets for the truly incredible The 1975 at Glasgow Summer Sessions NOW via WWW.SMMRSESSIONS.COM. The band will be joined by a huge line-up including Twin Atlantic, You Me At Six, Pale Waves, Ten Tonnes and No Rome.