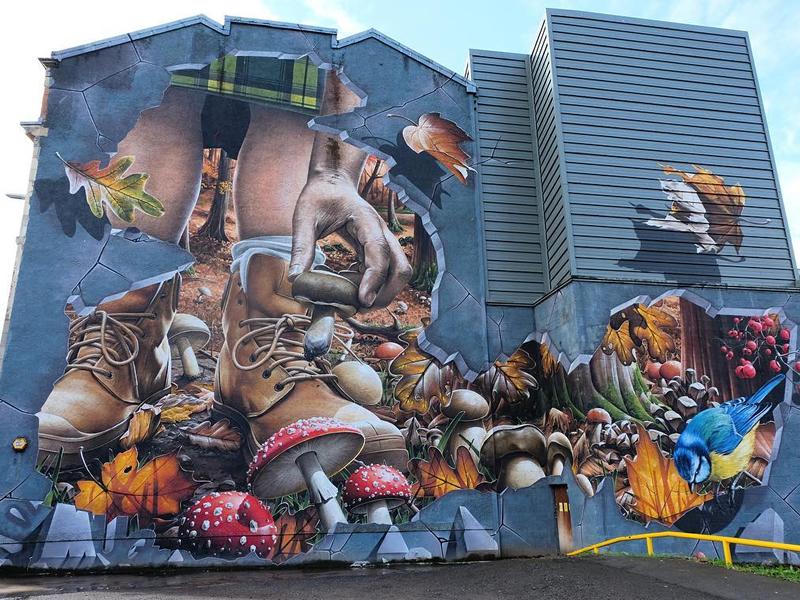 Glasgow has always been bursting with cultural expression, from music to museums to history and heritage. However, there is one aspect of Glasgow's culture that is taking over – street art!

The first paintings stretch back to the 1970s, when socialist-influenced murals were developed. However, the scene exploded over the last 10 years when Glasgow City Council promoted public art to clean up the city and presented an opportunity to develop local artists. Over 12,000 Instagram posts have been dedicated to the murals that adorn Glasgow’s streets. An analysis by TransPennine Express has revealed that Glasgow is one of the top cities in the North of the UK for street art, ranking third.

Photorealism artist Smug is putting Glasgow on the map with his murals, with the pieces ‘Saint Mungo’ and ‘Fellow Glasgow Residents’ named the most popular in the North in June and July. The research also looked at Glasgow’s most Instagrammed street art.

1. Saint Mungo - Smug
Smug’s most popular artwork depicts Mungo, Glasgow’s patron saint, in modern clothes. It is said that in the 6th Century, boys from Mungo’s village were throwing stones at robins, and one bird fell over. Mungo ran to it and prayed over the bird, and it flew away a while later. The villagers called it a miracle, and Smug chose to depict this in the mural, with modern day Mungo holding a robin. You can find this piece on the High Street.

2. Fellow Glasgow Residents, Smug (Pictured, photo credit @rssvision)
This enormous mural adorns the side of Ingram Street Car Park. It was commissioned by the Glasgow City Council with support by the NCP. In this bright piece, you will spot some of the varied wildlife that lives in Glasgow’s green spaces and parks throughout the seasons, such as squirrels, foxes, bees, birds and highland cows.

3. Crazy Cat Lady, Rogue One
One of Glasgow’s most celebrated street artists, Rogue One, created this fun, innocent artwork to spruce up an area that looked slightly tired on Sauchiehall Street. It depicts a lady knitting with three cars playing around her feet. This crazy cat lady even has feline inspired slippers, and Grumpy Cat wallpaper.

4. Saint Enoch and Child, Smug
Complimenting the image of Saint Mungo, this mural on High Street interprets the founding story of Glasgow; St Thenue/Enoch cradling her beloved St Kentigern/Mungo. The tenderness of the image is partly what makes it so popular, with many Instagrammers stating it reminds them of their relationship with their children.

5. Glasgow's Tiger, Klingatron & Art Pistol
This piece on Clyde Street by Klingatron and Art Pistol replaced another mural of a tiger, which was very popular, having been commissioned in 2010 by Tiger Beer. The new piece was initially met with scepticism as people thought it was too literal and less bright than the original tiger, but it is now one of Glasgow’s most popular pieces.

6. Honey... I Shrunk the Kids, Smug
An enormous photorealistic piece on Mitchell Street by Smug pays tribute to the film of the same name. It shows a girl with a magnifying glass who appears to be picking an object up off the street. If you position the photo correctly, it can look like she is picking up people.

7. Wind Power, Rogue One & Art Pistol
This pretty piece by Rogue One and Art Pistol was originally conceived as a live installation. It celebrates sustainable energy production in Glasgow and Scotland as a whole. It is located on Mitchell Street – one of four pieces in the top 10 to be found here, showing this area is a real thriving street art hotspot.

8. The World's Most Economical Taxi, Rogue One
Rogue One created another cool, conceptual piece with this taxi-powered-by-balloons depicted on Mitchell Street. The attention to detail is astounding – the artist painted a brick wall on to a brick wall, after all.

9. Glasgow's Panda, Klingatron
It’s well documented that Scotland loves a panda, after the nation was captured by the story of Tian Tian and Yang Guang, two giant pandas from Edinburgh Zoo. Thanks to Klingatron, Glasgow has one too – living beside the bamboo gates of Gordon Lane, off Mitchell Street.

10. Boba Fett, Rogue One
Rogue One rounds out the top 10 with one of his newest pieces, depicting Boba Fett from Star Wars. The piece was painted during the recent Yardworks Festival and can be found on Eastvale Place, at the popular SWG3 event space.

You can see all of Glasgow’s most Instagrammed street art, as well as other pieces around the North of the UK , via the TransPennine Express website.

The quest to have Scotland’s very first ever Lego set endorsed by the Lego Group took one step closer to becoming a reality last week.
Last Updated: 23rd July 2020