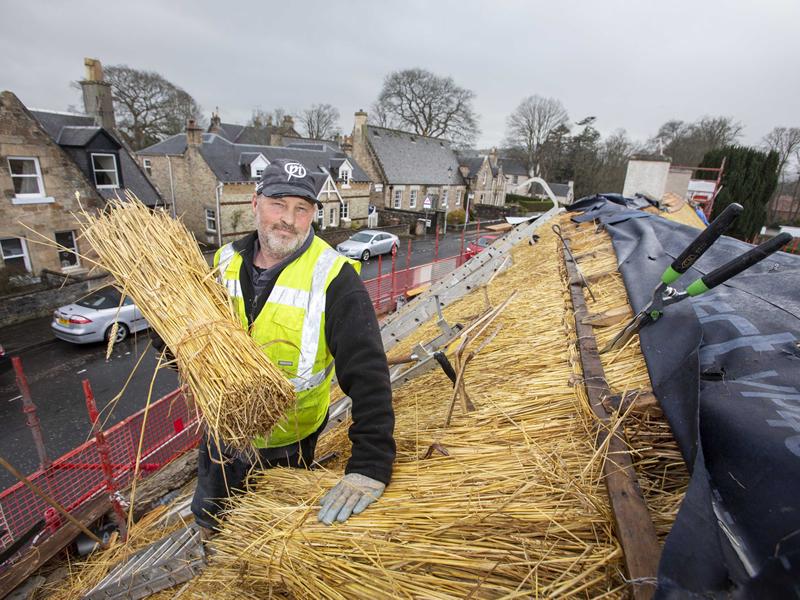 Thatcher Dave Brooks adds the final sheaf of wheat to the roof of Burns Cottage in Alloway.

The cottage, owned and looked after by the National Trust for Scotland is undergoing extensive conservation work by the charity, including the replacement of its traditional thatched roof.

The cottage was built by Burns’ father William Burnes in 1757 and is the place where Robert was born. Centuries of Scottish winters have taken their toll, with the roof, walls and chimney requiring specialist attention. The traditional thatched roof had developed significant tears and had worn away. Towards the front, moss had also begun to grow, collecting rainwater and rotting the thatch underneath.

Work, which is being undertaken thanks to generous donations, will continue to conserve the cottage over the next month with the property reopening to the public in mid April.

Caroline Smith, Operations Manager at Robert Burns Birthplace Museum said: “It’s wonderful to see the work progressing like this. The cottage is being repaired so that it’s there for many generations to enjoy. Thanks to the generous donations we’ve received, we’ve been able to bring specialists from all over the country to conserve the cottage. The money raised has helped pay for the thatching, fix the chimney and walls and limewash the cottage. Everything being done is in keeping with the original construction of the cottage and if Burns were to visit today, he’d be familiar with many of the methods and skills that are being used here.”