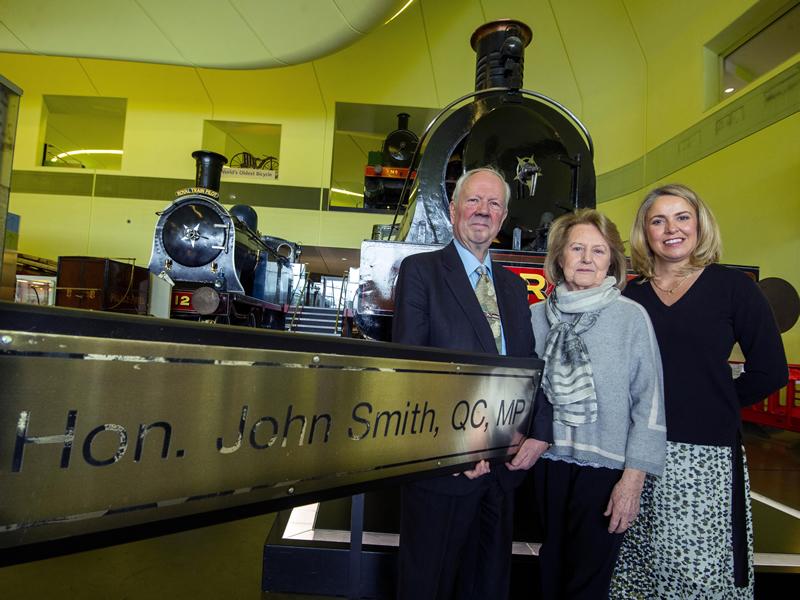 The plate, ‘The Rt. Hon John Smith, QC, MP’, which has been mounted on a wooden backing board, was presented by the Railway Heritage Designation Advisory Board (RHDAB) in the presence of members of John Smith’s family at Riverside Museum, where the city’s world-class transport and technology collection is exhibited.

RHDAB, co-chaired by Lord Richard Faulkner, selected Glasgow Museums as the recipient of the significant nameplate given John Smith’s connection to the area and the organisation’s reputation for preserving items of railway heritage from across Scotland, together with the impressive scope of the collection in its care. This was a key item on the agenda of the annual Heritage Railway Association Scottish Forum, which took place at Riverside museum this weekend.

John Smith’s widow, Baroness Smith of Gilmorehill, said: ‘I’m delighted that John’s nameplate will be available to see at Glasgow Museums. John and I met and married very near here at Glasgow University. He loved the city and would be proud to know he is being remembered in one of its finest museums.’

Lord Faulkner of Worcester, Co-Chair of RHDAB and President of the Heritage Railway Association, said: ‘We are deeply grateful to Glasgow Museums for agreeing to accept this iconic nameplate, which commemorates the life of one of Britain’s greatest statesmen. It is a rare honour for trains and locomotives to be named after parliamentarians, and it is wholly fitting that the wonderful Riverside museum should be this nameplate’s final home. I particularly appreciate the efforts of my colleagues in the RHDAB Scottish Support Group for the part they played in ensuring this important part of the story of railways in Scotland is preserved for everyone to enjoy and appreciate for ever.’

Councillor David McDonald, Chair of Glasgow Life and Depute Leader of Glasgow City Council, said: ‘We are grateful to the Railway Heritage Designation Advisory Board for donating this historic railway nameplate to Glasgow Museums.

‘John Smith was a revered politician, someone who commanded respect yet a man full of humour and warmth. Sadly he passed away far too young. What endures is his strong connection to this area and I think it is fitting we accept this important piece of railway history into Glasgow’s world famous transport and technology collection, where it can continue to be cared for for generations to come.’

Elizabeth Smith Baroness Smith of Gilmorehill together with Lord Faulkner, participated in the presentation of the nameplate to Duncan Dornan, Head of Glasgow Museums. They were joined at the handover by representatives from RHDAB, the Heritage Railway Association and Scotrail.

The train, unit 320321, was named for John Smith in 1997 and carried the plate until 2012. It began service in the Glasgow area in 1990 and was among with the first batch of Class 320 trains used on the North Clyde line between Balloch and Airdirie, via Glasgow Queen Street. These trains were also used on the Argyle Line between Dalmuir and Milngavie to Motherwell and Larkhall stations via Glasgow Central. Unit 320321 is still in service in the Glasgow area.
The train was named in memory of John Smith, and the nameplate was designated in tribute to the positive impact of devolution which Smith had championed. The naming took place in the immediate aftermath of the yes:yes vote, which gave the people of Scotland greater freedom to set their own priorities. This included increased rail investment, which led to the reopening of four Scottish railways; Larkhall, Alloa, Airdrie-Bathgate and the Borders.

The nameplate will be stored at Glasgow Museums Resource Centre, where the public can see it on request. GMRC is the main store for Glasgow Museums collections when they're not on display. Glasgow is one of only two cities in the UK to have a publically accessible store and like all Glasgow Museums it is free to visit.

Glasgow Museums plays an important role in helping to preserve the railway heritage across Scotland and is a member of the Heritage Railway Association and is represented on RHDAB’s Scottish Support Group. The RHDAB is a statutory body tasked with preserving items of heritage significance from the national railway network.