Glasgow Distillery has unveiled the third and final expression to complete its Signature Range with Glasgow 1770 Single Malt Triple Distilled – Release No.1. 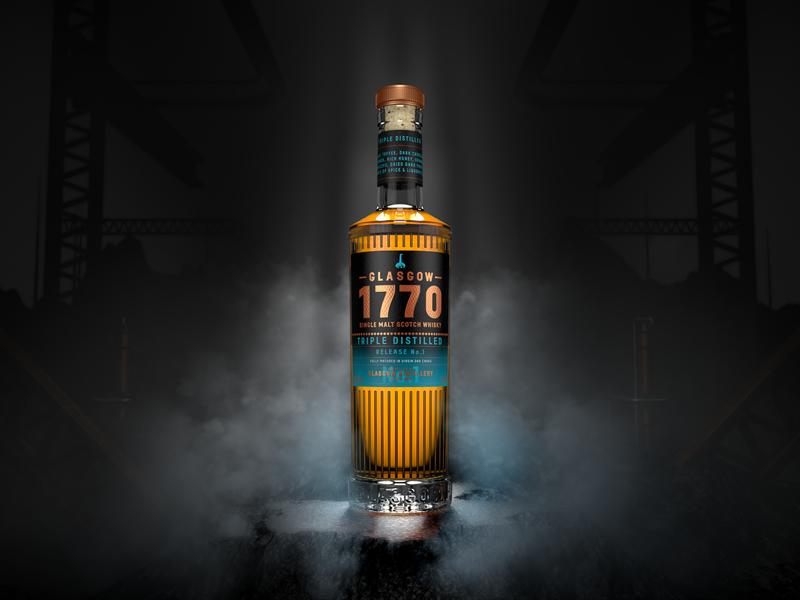 Triple Distilled Release No.1 follows the launch of the Glasgow 1770 Peated expression in 2019, and the distillery’s inaugrual launch of Glasgow 1770 Original in 2018 which was an instant sell out success. Since then, the range has picked up an ever growing number of international whisky awards, including Gold Medals at The San Franciso World Spirits Competition; International Spirits Challenge, and Scotch Whisky Masters.

This eagerly anticipated release is the third and final iteration in the core range from the Distillery, before embarking on an exciting selection of single cask and limited edition releases which are currently in the pipeline.

Harnessing the incredibly pure water of Loch Katrine, the distillery’s natural water source, with a third distillation and maturation exclusively in virgin oak casks, the resulting spirit is a smooth single malt whisky with deep complexity, character and warmth.

On the nose aromas of rich sweet butterscotch toffee and dark cherries leads to hints of ripe pear and baked vanilla cheesecake on the palate, followed by spicy chocolate. The finish is long and clean, with lingering notes of rich honey and vanilla.

Liam Hughes, Co-Founder of The Glasgow Distillery Company said:“We are thrilled to celebrate the launch of our first Triple Distilled whisky. It has been a project of passion for everyone at the distillery and is truly a celebration of two of the essential elements in the whisky making process: the water and the wood.

“We’re incredibly fortunate that our natural water supply is from Loch Katrine, it gives such softness and purity to our whisky. We also have access to virgin oak casks of outstanding quality and have used these for the entire duration of this whisky’s maturation. The additional complexity and depth that this adds is exceptional and the marriage of these two elements, the water and the wood, is really apparent in this exciting new release which we are proud to add to the Glasgow 1770 Signature Range.

“It has always been our vision to create a core range of single malts that reflect differing production styles. Our vision was influenced by the original Glasgow Distillery, which was founded in 1770 and inspired the name for our range of single malts. After discovering that they produced unpeated, peated and triple distilled whisky some 150 years ago we set out to do the same for the modern whisky era.”

Non-chill filtered and natural in colour, Glasgow 1770 - Triple Distilled Release No.1 is a limited-edition whisky bottled at 46% ABV and is now available to purchase from the Glasgow Distillery website for £49.

BBC Debate Night is returning for 2022

BBC Scotland's topical TV programme Debate Night is searching for people to be part of the big studio audience.

Bearsden and Milngavie u3a is waiting to hear from you!

If you are retired or semi-retired, and would like to meet people of a similar age for a variety of fun and interesting activities read on...

Young musicians across Scotland are set to benefit from a special £50k funding scheme to commemorate five years since the loss of 14-year-old musician Eilidh MacLeod in the Manchester Arena attack.

Food fans and families have landed a first look inside the hotly anticipated new family seafood restaurant and takeaway – The Scallop's Tale which opens today in Bearsden.

OVO Hydro is a Greener Arena

Glasgow's OVO Hydro is the first arena in the world to achieve a Greener Arena (AGA) certification to sustainability!

Glasgow Children’s Hospital Charity has confirmed it is extending its fundraising partnership with Buchanan Galleries for the eighth year!

With live music now in full swing, Glasgow-based music agency Bar Bands is offering bars, restaurants & other hospitality venues the chance to get their hands on a complimentary evening of live music!

Exercising regularly improves brain health as much as physical fitness, say experts launching a programme to boost performance and wellbeing.

The much loved ALDI Supermarket Sweep is returning to Glasgow!

Aldi Scotland's hugely popular Supermarket Sweep has returned for another year and customers in Glasgow have the chance to raise as much money as possible for a local foodbank of their choosing.

A crowd of more than 10,000 Kiltwalk Heroes mounted a tartan takeover of Glasgow today, raising a whopping £3 million for charities across Scotland!