This weekend marks the digital debut of Paisley's annual Sma' Shot Day celebrations as a series of virtual events and workshops will take place to mark this important date in the town's calendar. 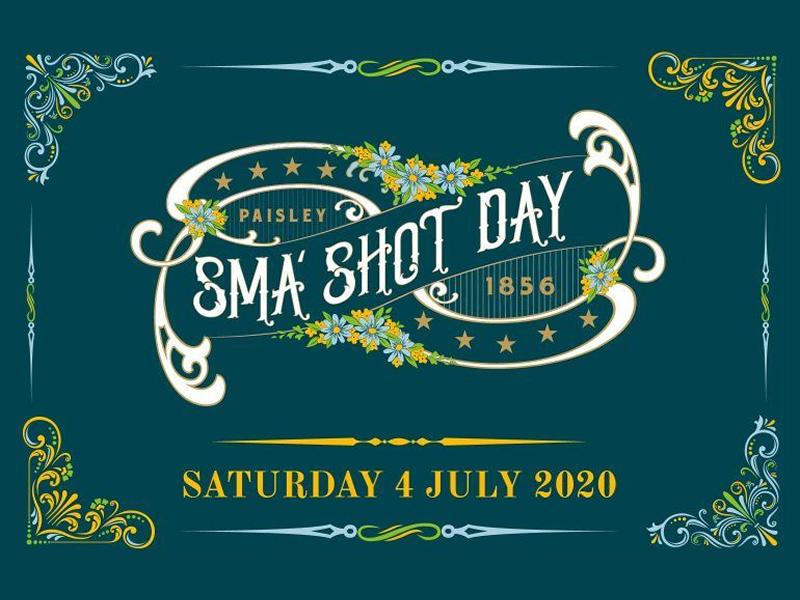 The online event will take place on Saturday 4 July – the time when the weavers and their families would traditionally always take their holidays.

The move to take the event online for 2020 is in response to the current COVID-19 pandemic, to ensure celebrations can still take place in adherence with national guidance.

The traditional Sma’ Shot holiday in Paisley takes its name from a famous dispute between the local shawl weavers and manufacturers in the 19th century. In 1856, following a long dispute, the manufacturers backed down and an agreement was reached to pay for the Sma’ Shot, the invisible stitch which bound the Paisley shawls, with a new table of prices published on 1 July 1856.

This year’s event will not only mark this important date in the town’s history but will also celebrate our fantastic key workers.

The event always offers plenty of opportunities for people to get involved and have fun and this year is no exception.

The day will kick-off in style at 12pm as The Charleston Drummer himself, Tony Lawler, will lead a mass online drum-off where the public are being encouraged to make as much noise as they can and share their celebrations on social media.

Aerial dance theatre company, All or Nothing, will be performing dance and music project - Connecting Threads - inspired by the background and history of Sma’ Shot. Everyone is invited to join in and dance along to the new Sma’ Shot inspired music track by Dave Boyd.

In the run-up to Connecting Threads local groups and individuals have been participating in online classes and creative tasks with the group and have submitted videos that will feature in a short film that can be viewed online on the day.

Local theatre company PACE will be hosting live drama workshop sessions created especially for the day – an interactive storytelling workshop suitable for 3-7 year olds and an activity-based session aimed at children aged 7 and above.

Sma’ Shot Day favourite - The Tea Dance - will also take place this year, albeit it from the comfort of your own home, as Renfrewshire Leisure and Paisley FM bring a special Sma’ Shot Day radio broadcast of this popular event.

For those who want to be fully immersed in the day’s events, local upcycled fashion innovators ReMode have put together some online video tutorials to show how people can get crafty and make their own costumes or window decorations to celebrate the day.

It would not be Sma’ Shot Day without the popular Poetry Slam. This year the spoken-word event will be known as the ‘Dooslan Staying Hame’ where people can enjoy some poetry written during lockdown and performed by some of Renfrewshire’s finest contemporary poets and spoken-word artists.

In addition, Renfrewshire Leisure and The Bungalow are partnering up for the Sma’sh Hits Sma’ Shot Special music event, showcasing a selection of local musicians.

For those looking to start Sma’ Shot weekend off early join CREATE Paisley and host Jordan Stewart for an unplugged Live Open Mic night on Friday 3 July featuring young singer/songwriters from across Renfrewshire.

This will be followed on Saturday 4 July by ‘Paisley in Song’ where people can enjoy five songs from young Renfrewshire songwriters in this exclusive online showcase. The youngsters worked alongside Paisley-songwriter Michael Cassidy to develop a set including two new collaborative songs celebrating our key workers and NHS, and three songs exploring Paisley's incredible history of song writing and poetic legacy, written in 2019 as part of Renfrewshire Council’s THCARS2 project.

Renfrewshire’s Provost, Lorraine Cameron, said: “Sma’ Shot Day is such a popular date in the town’s calendar and it’s excellent that we can still celebrate it this year through a series of fantastic online events.

“The digital programme is packed full of fun, interactive and creative activities that the whole family can participate in and enjoy – helping to create the amazing sense of community that is always so present at this event.

“I can’t wait to welcome you all to Saturday’s event and I look forward to logging on and enjoying some of the great activities planned.”

For all the information on what’s taking place as part of this year’s digital Sma’ Shot Day and how you can get involved, please visit www.paisley.is/featured_event/sma-shot-day/.

Featuring a live orchestra and extraordinary original score The Addams Family is sure to entertain whether you are 12 or 312, don't miss it at the King's Theatre Glasgow!

Put your dancing shoes on, grab your grown ups and join What Happens Now? on a Saturday morning for one of their live Kitchen Discos!