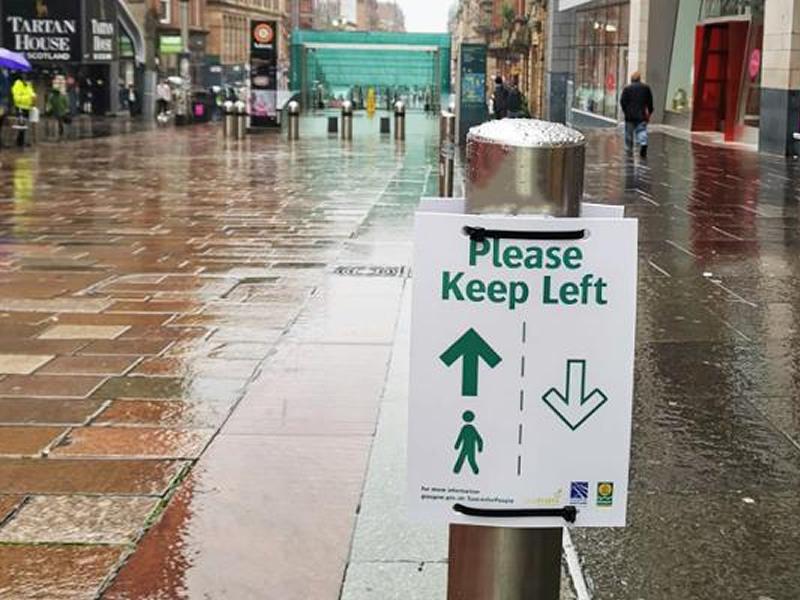 The advisory signs, anticipated to direct pedestrian flow, will be installed on Buchanan Street and Argyle Street precincts as part of a pilot scheme.

By guiding pedestrians to keep left where they can, and only crossing the precinct when necessary; it will help people maintain physical distancing and facilitate movement around these busy areas more safely.

As part of our Spaces for People programme which is introducing temporary infrastructure measures to provide extra space for people to walk, wheel and cycle as COVID-19 restrictions ease - it is anticipated that the advisory signage will provide reassurance to pedestrians who are returning to our city centre for work, shopping and leisure, whilst also helping to suppress a second wave of the virus.

Spaces For People
Supported by £3.5m funding from the Scottish Government and administered by Sustrans Scotland, Spaces for People will see footways widened at pinch points across the city centre and in neighbourhoods to ease pedestrian movement and make it easier to access businesses, community facilities and public transport hubs. Consideration is also being given to the positioning of temporary strategic cycling routes to highlight cycling as an attractive, viable and long term commuting choice.

Spaces for People measures already introduced in our city centre includes the provision of customer queuing space around Glasgow Central Station High and Low Level entrances as well as footway widening and road closures in and around George Square.

A bus/cycle/taxi gate has been added to George Square (south) and South Frederick St (north), and a bus/cycle/taxi lane on Cochrane Street, to create sustainable transport corridors. This work was completed in tandem with pavement widening on Hope Street, Union Street and Bath Street.

Other initiatives in the city centre to ease pedestrian movement include traffic light automation which removes the need to touch the button to prompt the green man to display. The automated traffic lights will also where appropriate, be set to either minimise pedestrian waiting time or increase the duration the green man is displayed; with both adjustments made where possible.