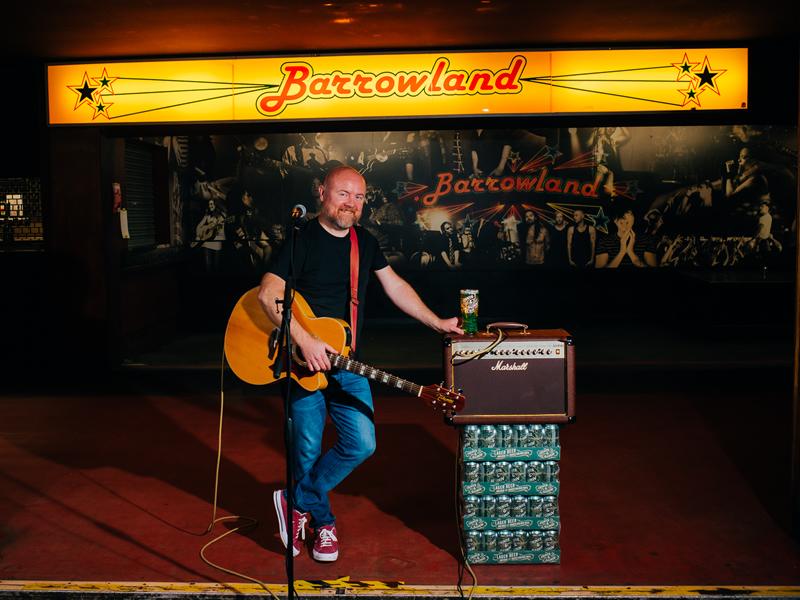 As part of the brewer’s ‘Recommending the Recommenders’ campaign, Mark will take to the stage on Thursday at 7pm, performing a mix of his own songs as well as a few covers. The gig will be streamed to a potential live audience of 250k+ on the Innis & Gunn Facebook page.

Innis & Gunn was named as ‘The UK’s most recommended beer brand’ this year in a YouGov poll of drinkers, and has been collecting nominations from beer lovers as it looks to return the favour. Over 1100 people have put either themselves or a friend / loved one forward to be rewarded since the campaign launched. Innis & Gunn is now in the process of making the dreams of a number of lucky fans come true.

Mark was recommended by his pal Ailsa for keeping their friends entertained during lockdown by playing tunes streamed live on Facebook instead of at the usual weekly jam session in his local. Other recommendations have included ‘the world’s grumpiest woman’ who was sent a steel band to perform in her garden and a hard-working postie in Edinburgh who was sent a taxi full of his favourite accompaniment to Innis & Gunn – Jaffa Cakes.

Mark Said: “I’ve been doing the jam session in our local for over 10 years now so when lockdown struck, I thought it would be nice to keep my mates’ spirits up and play them a few tunes on Facebook live. It’s obviously gone down well since they’ve recommended me for this amazing reward. As Scottish venues go it doesn’t get much more iconic than the Barrowlands, so getting to play a show live on such a famous stage is definitely a bit of a pinch yourself moment. Thanks to Innis & Gunn for sorting it out.”

Dougal Gunn Sharp, Founder and Master Brewer at Innis & Gunn, added: “We were obviously delighted to be named the UK’s most recommended beer brand in 2020 and, given that it’s our fans that have bestowed this enviable title upon us, we had to think of a way to pay them back. We’ve been asking for folk to recommend either themselves or someone they know, along with their reason, and now we’re in the process of rewarding our favourites in a way that’s personal to them. They’re also getting beer, of course.

“We’ve had over 1100 recommendations since we started the campaign in August, with some lovely stories coming though like Mark’s. We’re delighted to recommend him for his considerable talents. We’ll continue to reward recommenders in to October. So, if you know someone who you think is worth recommending, or even if you just want to recommend yourself, get in touch.”

To make a recommendation, visit: www.innisandgunn.com