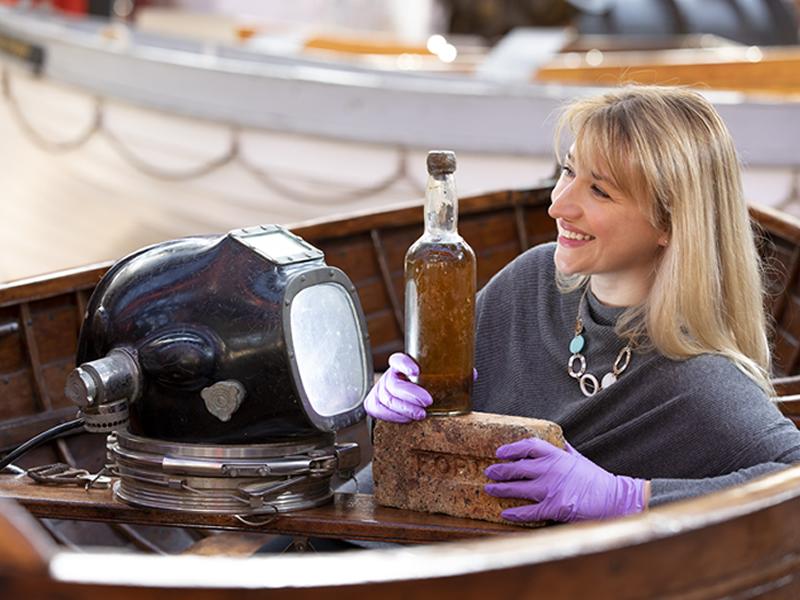 The Scottish Maritime Museum has successfully bid for an eighty year old bottle of whisky salvaged from one of Scotland’s most famous shipwrecks and the inspiration for the muchloved Ealing Studio comedy Whisky Galore!

The unlabelled bottle of blended whisky from the 1923 SS Politician, which ran aground off the Isle of Eriskay in 1941, was acquired by the Scottish Maritime Museum with the support of the National Fund for Acquisitions at The Grand Whisky Auction.

The rare find will become part of the Scottish Maritime Museum’s nationally recognised collection of maritime heritage which is housed in a former Victorian shipyard engine shed in Irvine, Ayrshire, and on the site of the world-famous William Denny Shipyard in Dumbarton.

The whisky, which is now believed to be undrinkable and which was one of 264,000 bottles stowed onboard the wartime cargo vessel, was recovered from the shipwreck by George Currie of Orkney in June 1987.

The North Sea diver and his work colleagues went looking for the wreck after completing a subsea cable repair between South Uist and Eriskay and the bottle was in his possession up until now.

Laden with goods to be sold to raise funds for the war effort, the 800 tonne SS Politician set sail from Liverpool on the 3rd February 1941. Bound for Kingston, Jamaica, and New Orleans, it was brimming with motor cars, bicycles, cotton, medicines, tobacco and around £145,000 in Jamaican bank notes.

It was, however, the fate of the contents of Hold Number 5, some 22,000 cases of the finest malt whisky from bonded warehouses in Leith and Glasgow, which inspired Compton Mackenzie’s famous 1947 novel Whisky Galore!
Two years later, Mackenzie’s romantic comedy featuring the ‘SS Cabinet Minister’ and the islanders of ‘Great and Little Todday’ was made into the enduringly popular Ealing comedy starring Gordon Jackson, Joan Greenwood and Basil Radford.

The lot acquired by the Scottish Maritime Museum also includes a diving helmet worn by the diver George Currie who recovered the whisky bottle, two bricks being carried as cargo on the ill-fated vessel and a poster from the 2016 remake of Whisky Galore! which featured Eddie Izzard, Gregor Fisher and James Cosmo.

“This bottle of shipwrecked whisky may be small in size but the colourful story behind it provides us with a powerful and enthralling link with our cultural and social maritime past.

“Intact and in good condition, which is amazing considering 46 years submerged in
saltwater, the bottle complements our nationally recognised collection of Scottish shipbuilding, boatbuilding, engineering and design perfectly.

“It will play a leading role in helping us tell the stories behind the collection and exploring our social and cultural relationship with the sea with visitors.”

“We are thrilled to add this bottle of whisky which has become so imbedded in Scottish island folklore to the collection.

“There are so many fascinating topics we can explore with our visitors through it, from island life during the war period and underwater archaeology and recovery through to challenging our understanding and portrayal of smuggling in Scottish waters.

“The wreck of the SS Politician had a profound effect on the life of the islanders of Eriskay, many of whom felt keenly the injustice of being prosecuted. As well as looking at the impact of the shipwreck generally, we will also explore maritime laws and their implications through this wonderful new artefact.”

The bottle of whisky will initially go on show in the Scottish Maritime Museum’s Boatshop exhibition space where it will be free to view.

In 2023, it will feature in the Museum’s ‘Smuggling and Swashbuckling’ exhibition where it will help stimulate conversation around alternative views of smuggling.

Image: Abigail McIntyre, Senior Curator at the Scottish Maritime Museum, pictured with an eighty year old bottle of Scottish whisky salvaged from the 1923 SS Politician, one of Scotland’s most famous shipwrecks and the inspiration for the much-loved Ealing Studio comedy Whisky Galore!

The whisky bottle, which was acquired by the Scottish Maritime Museum with the support of the National Fund for Acquisitions at The Grand Whisky Auction, will become part of the Museum’s nationally recognised collection of maritime heritage along with the diving helmet worn by George Currie from Orkney who recovered the whisky bottle, a brick being carried as cargo on the ill-fated vessel and a poster from the 2016 remake of Whisky Galore, all acquired as part of the auction lot.

Issued on behalf of the Scottish Maritime Museum by Joanna Harrison