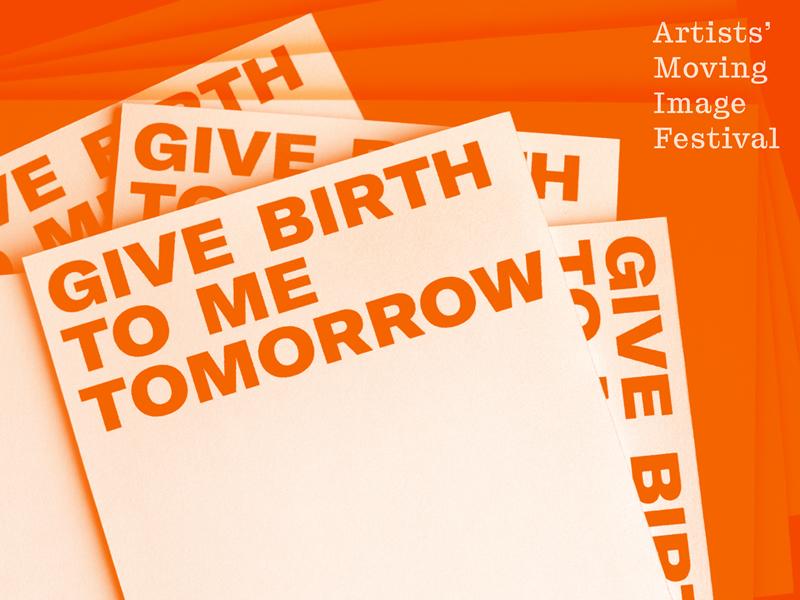 Co-programmed by Tako Taal and Adam Benmakhlouf the festival will take place across the course of 2021, beginning with an in person screening from 21st to 24th January at Tramway, Glasgow followed by a series of online screenings and events, scheduled to follow the lunar calendar across the rest of the year and available to view from any location online.

GIVE BIRTH TO ME TOMORROW extends what was a weekend festival across eleven months, first inviting audience members to see an introductory selection of works in the gallery space at Tramway before participating in a full programme of virtual screenings and events.

The programme lies in between the folds of artists’ moving image, performance documentation, protest documentary and animation, considering their strategies for interruption, to undo the formal and psychological trappings of a neo-colonial, white supremacist, capitalist, patriarchal cinema system.

A list of works, screening times and a booking link for Tramway, will be released in early January 2021.

The extended structure of GIVE BIRTH TO ME TOMORROW also encourages each artist’s work to be considered distinctly, as an event in itself. Space is given for these artists to be different from one another. Each work reimagines what artists’ moving image is, literally setting a new agenda for each meeting. Alongside each release, the work or small set of works will be the subject of a dedicated event, structured with prompts to activate close and detailed watching and discussion by attendees.

The programmers undertook a residency at Cove Park earlier in 2020 to plan the programme for the festival.

Tako Taal said: “GIVE BIRTH TO ME TOMORROW obstinately extends what was a weekend festival across 11 months as a strategy against the frenetic fatigue of the festival format. A demand can unite and thinking together about possible futures requires time; I want to stretch this out as much as I can. The extended structure encourages each artist’s work to be considered distinctly, as an event in itself and the breaks in between a chance for renewal.”

Adam Benmakhlouf said: “Since the invitation to co-programme, the global pandemic has - in symbolic and real terms - prevented the festival from comfortably resuming. Our schedule is in some ways sparse, but energies are directed away from marathon watches of dozens of films. Can you instead watch these films closely and enunciate what they look like, what they do, bring, lack, break, bend, reinforce...?”

Tickets for Tramway will be released in January, alongside a full programme for the festival at the venue. An update on social distancing plans for the event will also be made then.

Dates for online events across 2021 are as follows, with a programme to be announced in the new year.