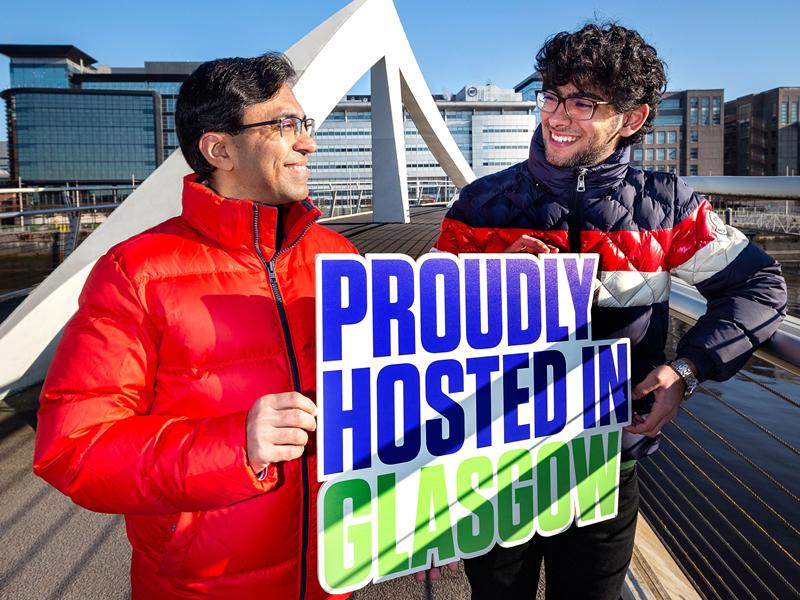 The UK will host the international summit at the Scottish Event Campus (SEC) in Glasgow on 1 – 12 November 2021 and Glasgow City Council has received a staggering response from people keen to help support the staging of the event.

As proud host city, Glasgow residents, including father and son Navneet and Aayush (pictured), were eager to get involved, with 70% of applications coming from the city and surrounding areas. People from Scotland as a whole have contributed 80% of applications covering 31 local authority areas.

Others from further afield also registered their interest in the programme, including people from 98 countries such as Australia and India.

Young people under the age of 25, keen to make the most of the opportunity to gain valuable life and career experience and new skills, accounted for a third of applications. The campaign also saw people up to the age of 84 throw their hat in the ring, jumping at the chance to meet new people and be part of the COP community.

The volunteer team received an incredible 5,000 applications from people from a broad range of backgrounds within the first week of recruitment opening and a fifth of people who applied were drawn to the programme despite never volunteering before.

Glasgow City Council’s COP26 Volunteer Manager, Claire Shiel said: “It is incredibly encouraging to see such an overwhelming and positive response to our call for COP26 volunteers. Volunteers bring an unrivalled spirit and warmth to any major event and, in return, have the chance to represent the city and have a truly unique experience. We are looking forward to welcoming a diverse and passionate team on board and are grateful to everyone who has expressed an interest.

“From the figures we can see that COVID has not diminished people’s spirit and strength of feeling around volunteering and this is extremely heartening for the sector as a whole. It’s amazing what can be achieved together through volunteering and, although we do not have roles for everyone who has applied, we know there are many organisations across Glasgow and beyond who are looking for volunteers and will be delighted to see this enthusiasm.”

Around 1,000 volunteer places are available for COP26 and will see people based across Glasgow and Edinburgh providing information on the conference and the venues, supporting delegates staying in and travelling around the city, and promoting the best of what Glasgow and Scotland has to offer.

The selection and skills matching process now begins before people are offered a volunteer role. Glasgow City Council is working with the sector to capture this continued appetite for volunteering in the city and support applicants into a variety of volunteer avenues.

Ahead of the event, volunteers will receive a workshop on sustainability from the UN and be given the training and tools required to carry out their roles successfully and confidently.

COP26 will bring together heads of state, climate experts and campaigners to agree coordinated action to tackle the climate emergency.

These vital climate talks were postponed by a year to November 2021 to allow time to deliver a successful summit while the world tackles the pandemic. Organisers’ intent remains to hold the summit in person, with Glasgow as host city, whilst putting the health and wellbeing of all involved at the centre of the event.