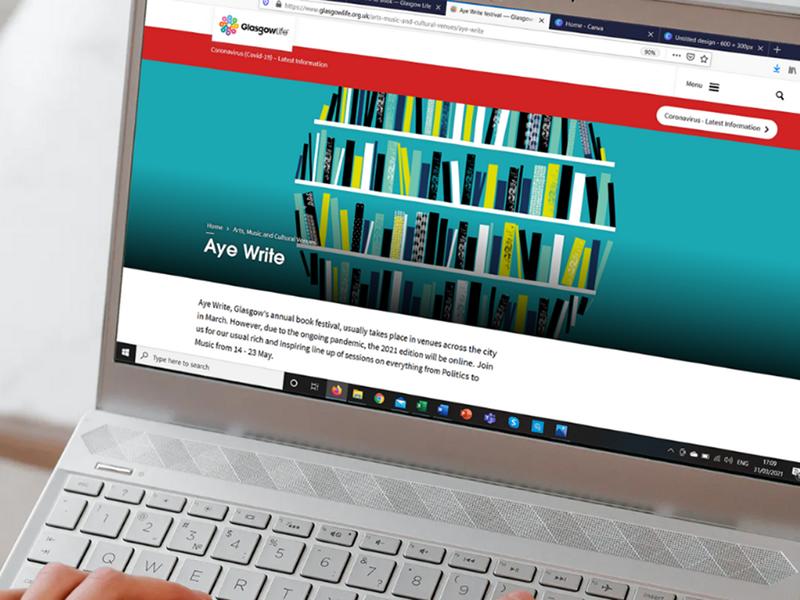 Aye Write is Glasgow’s Book Festival and is produced by Glasgow Life, the charity which delivers culture and sport in the city. The live book festival, usually held in March at the Mitchell Library, was postponed due to Government guidelines in response to Covid-19. Instead, the 16th edition of Aye Write will take place online, bringing the book festival to audiences across the world to enjoy in the comfort of their own homes. Early Bird Passes for access to all the events over the two weekends will be available from today (Thursday 8 April 2021) until the end of April, at the early bird price of £40.

Find out more and buy an Early Bird festival pass

On Wednesday 28 April (7pm), as a warm-up to the main event, Scotland’s top crime writers Chris Brookmyre, Denise Mina and Louise Welsh will be in conversation with each other, tickets for which are available today (Thursday 8 April) too. The event is also part of the festival pass.

The full digital programme of over sixty author talks and discussion panels will feature more than a hundred writers from Scotland and around the world, as well as across the cultural spectrum, including stars from stage and screen, politics, current affairs and entertainment. Well-known, award winning names from the world of books will sit alongside new literary talent. A lively blend of entertaining, uplifting and thought-provoking events will provide escapism, whilst others reflect on the issues of the day including mental health and well-being, racism, women’s rights, ethical travel, data security and Scotland after the coronavirus pandemic.

Highlights of this year’s Aye Write in May include: TV entertainers Robert Webb and Mel Giedroyc; broadcaster and political journalist Andrew Marr about the books that made him; radio and TV presenter Nicky Campbell on his adoption memoir; The Rev. Richard Coles talking about his own experience of grief; musician turned writer Tracey Thorn (Everything But the Girl) and folk legend Richard Thompson (Fairport Convention); bestselling novelists Maggie O’Farrell and Kate Mosse in conversation; 2020 award winning authors Douglas Stuart (Booker Prize for Shuggie Bain) and Monique Roffey (Costa Book of the Year for The Mermaid of the Black Conch); BBC security correspondent Frank Gardner; historian Niall Ferguson; Lockerbie campaigner Jim Swire talking to Kate Adie and former Labour leader and current Shadow Secretary of State for Business, Ed Miliband.

The full programme will be available on the Aye Write website from Thursday 29th April, with tickets on sale from that day too.