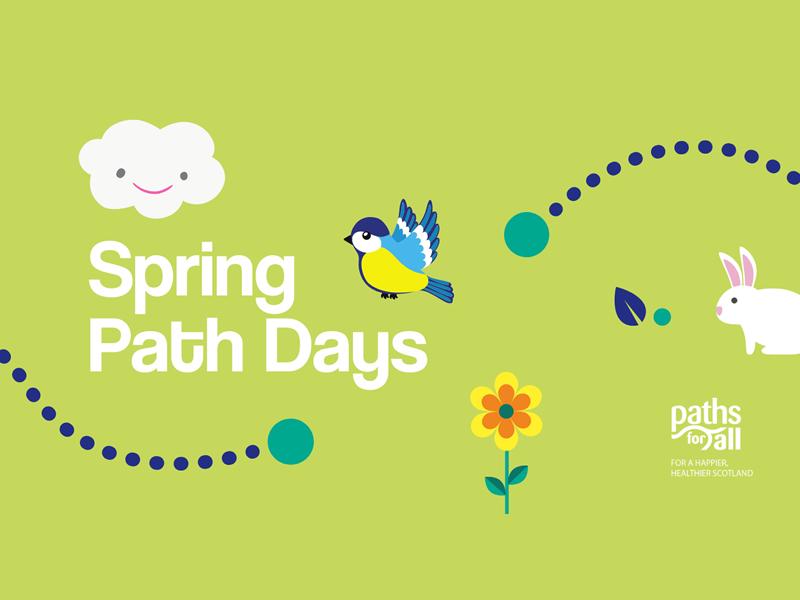 With longer evenings and warmer weather ahead, a Scottish walking charity is revealing its top ten tips to inspire families to embrace the outdoors and engage with nature.

This comes after Paths for All launched its Spring Path Day campaign which includes 30 days of activity ideas, an online content hub, and £1000 worth of outdoor educational prizes for schools and children to win throughout April.
The charity understands that many families may feel bored of their usual walking routes, and hopes the hub will provide a variety of ideas to keep younger children entertained while enjoying time spent connecting with nature and making memories.

Information has been designed to motivate families to go outdoors and get moving in a free and safe way, with activities including treasure hunts, wildlife spotting and creative walking.

As walking has been one of the only reasons many have had to leave the house for months, Paths for All has pulled together ten things for families to try outdoors this spring:

1. Make a Treasure Trail
Make up a trail and the first one to complete it could receive a prize at the end.

2. Wildlife spotting
Take a notepad on your walk and make notes on any interesting wildlife you spot – you could turn it into a game and the person with the most points wins.

3. Build a Den
Woodlands are great for den building and helps kids solve problems and work together creatively.

4. Creative walking
Simply moving helps soothe our minds, and being creative adds to that. Let nature inspire your creativity.

5. Walk with another person
Invite a friend for a walk today and show them where you like to go and why – following Scottish Government Covid-19 guidelines.

7. Step count or distance challenge
Release your inner competitiveness and challenge someone (or yourself) to get a certain number of daily steps or mileage.

8. Take a picnic
Pack a rucksack with your favourite snacks and drinks and head off along a path for an alfresco lunch.

9. Do a litter pick
Help to look after your favourite paths and places. If you’ve spotted some annoying litter – bag it up and bin it responsibly.

10. Be wise outside
We’re lucky to be able to access our countryside freely so make sure to treat the Scottish landscape in a responsible way whilst out and about.

Regular walks can help keep Scots safe while allowing us to meet up and spend time with family and friends. It has been brought into focus during the pandemic how positive getting outdoors is to boost mental, physical and social well-being.

Rona Gibb, Senior Manager at Paths for All, said: “Fresh air, being outdoors and connecting with nature is not only positive for our physical and mental health, it is also a fun way to socialise with others safely.

“Walking is key to leading a happy and healthy life. As we move into spring there is no better time to incorporate it into your family routine, even if it is just a short walk to school or round the block.

“The Spring Path Days online hub provides a tonne of ideas for families, and will offer something to suit all interests – there is also a host of competitions to get involved in!”

The charity encourages families across Scotland to get involved in its seasonal campaign by sharing a photo of what they have been doing this spring.

All participants will be entered automatically into a prize draw which will see 10 individuals win a den-building kit.

One lucky winner will also win a £500 voucher for their school to spend on outdoor educational resources.

Paths for All’s focus is clear: it wants to get Scotland walking: everyone, every day, everywhere.

For more information on Paths for All, visit: www.pathsforall.org.uk