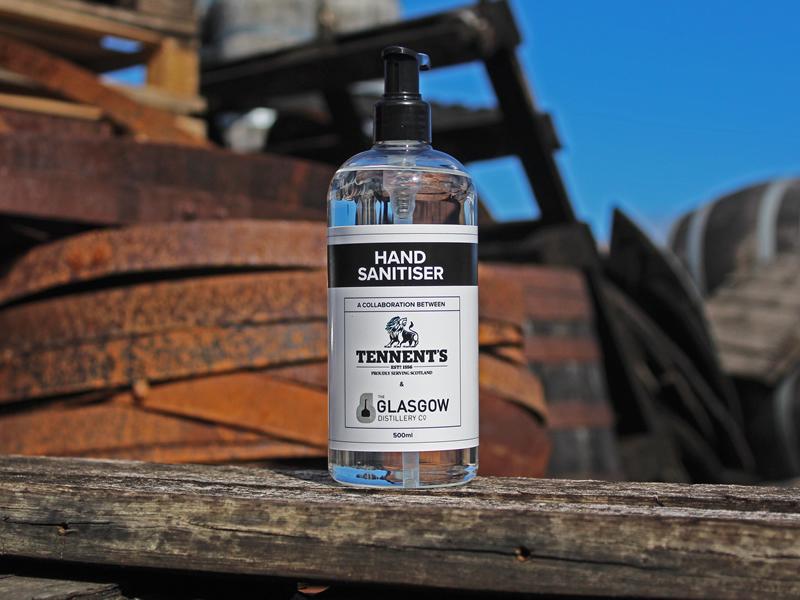 The 500ml bottles were produced by Tennent Caledonian Breweries (TCB) and the Glasgow Distillery Company (GDC) as part of ongoing support for the on trade.

5,500 litres of TCB X GDC branded hand sanitiser, worth more than £76,000, will be made available for Tennent Caledonian customers via their sales managers and will be included with deliveries as venues across the country get ready to welcome consumers back for the first time in months.

The move is the latest addition to TCB’s ongoing support for Scotland’s on-trade over the last year, including swapping old-for-new kegs, creating payment holidays and providing customers with guidance on applying for the various government support initiatives, among others.

In line with guidance received from the Scotch Whisky Association (SWA) and the World Health Organisation (WHO), spirit has been distilled to a very high strength by The Glasgow Distillery, to create the finished product: Glasgow-distilled hand sanitiser which will be distributed via TCB to the Scottish hospitality industry.

Kenny Gray, Managing Director at Tennent Caledonian Breweries, said: “Our usually vibrant hospitality industry has taken a beating over the past year and that’s been heart breaking to see. Coming together with the Glasgow Distillery Company has allowed us to explore another avenue of assistance for our customers, building on the support we have provided throughout the pandemic and will continue to provide as the on trade gets ready to ramp back up.

“With the industry reopening now in sight, naturally the focus on hygiene will be higher than ever. Hand sanitiser will be in high demand as a requirement for both staff and consumers so we wanted to help ease the pressure where we could and help our valued customers get back into action.”

Liam Hughes, Co-Founder and CEO at Glasgow Distillery Company, said: “At the start of the pandemic last March, like many in the distilling industry, we quickly amended our production schedule to allow us to include the production and distribution of hand sanitiser in a bid to help supply the emergency services, local hospital wards, care homes, charities and homelessness organisations.

“When we were approached to help support the reopening of the Scottish hospitality sector, we were delighted to get involved and utilise our first-hand experience from last year to make it happen. It’s fantastic that two Glasgow companies are working together to bring something that will be much needed to keep people safe as we get our industry back on its feet.”

Tennent Caledonian customers are directed to speak to their sales manager to order the sanitiser.