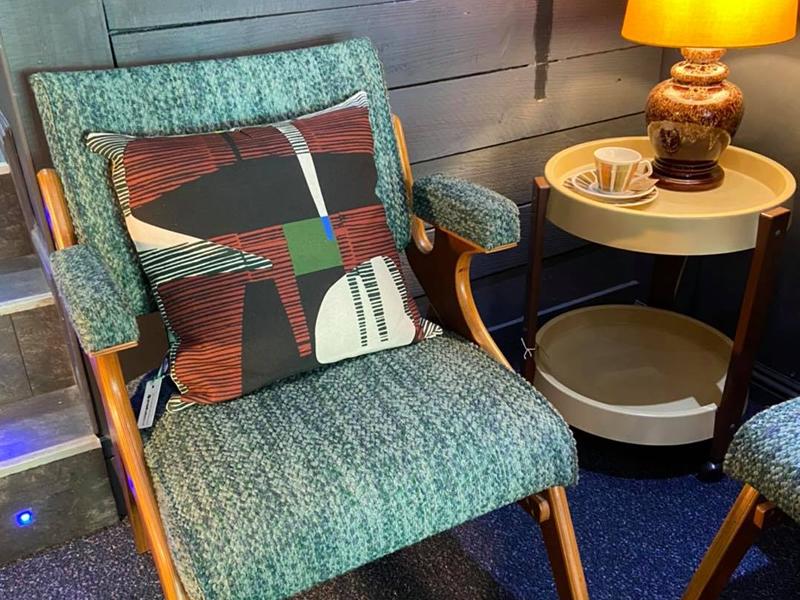 A joint venture from Steve Brown and Ben Spencer of Mid-Century Finds and Jill Rodger of Foundry Retro, the store reflects the trio’s enthusiasm for design from the 50s to mid-70s and will feature a selection of stock spanning the post-war period, mainly by British manufacturers.

Open Tuesday to Saturday, trove has a host of stand-out pieces for people’s homes – from furnishings, lighting and tableware to linens, home accessories and gifts.

The team behind trove has an enthusiastic following from trading online, at vintage fairs across Scotland and at Park Lane Market on the south side of the city, and is looking forward to welcoming old and new customers to the shop in the west end who share their appreciation for stylish and elegant design.

Among the many stunning vintage mid-century pieces, trove is also delighted to be the first stockist of Dapper Alice cushions and pouches, made in Glasgow from recycled vintage fabrics and the only Glasgow stockist of Eve Campbell’s eye-catching wall hangings inspired by the natural woodland on Scotland’s west coast.

Steve Brown of Mid-Century Finds said: “We’re so excited to share our love and passion for mid-century design with customers visiting trove. We love sharing the stories behind each piece and it is so satisfying to know that someone leaving the store is going to cherish their chosen item. There’s such a wide-range of unique and stunning items to choose from and we hope the stock grabs people’s attention in the same way it has for us.”

Jill Rodger of Foundry Retro said: “Having sold vintage homewares at fairs and markets for many years, I’m delighted to join Mid-Century Finds to bring this special collaborative space to life and share our love for design and interiors with people from near and far. As restrictions continue to ease, it’s an exciting time to be trading in Partick. It’s a joy to join the wealth of independent stores in Glasgow and see the west end thrive once again.”