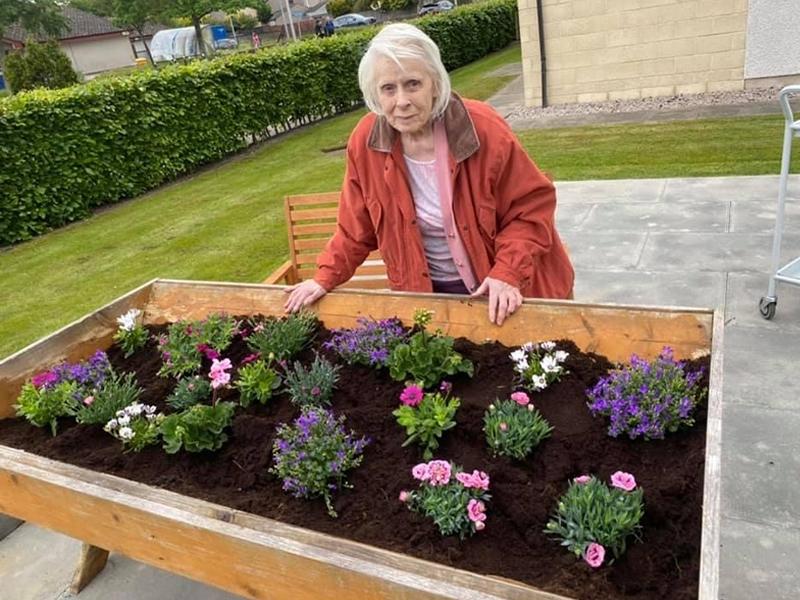 Renaissance Care Group organised a gardening competition between its 15 care homes, tasking residents, staff and relatives alike with transforming an area of the home’s garden or entrance way into something bright and cheerful.

With warmer months on the horizon, Renaissance Care initiated the competition to celebrate the enormous benefits which nature and the great outdoors can bring to health and wellbeing. It is hoped that residents and their families will be able to enjoy the fruits of the participant’s labour as restrictions are gradually eased and guests are welcomed back.

Beech Manor in Blairgowrie revitalised their entrance with the addition of a donated bench in tribute to a former resident, while local children who used to visit from a nearby primary school painted stones to add a pop of colour. Staff made sure to include residents with all interests and skills by arranging painting sessions of owl ornaments while others helped arrange plants outside.

Meadowlark, based in Forres, created a mini croft where residents are growing root vegetables to be used for a warming soup later this year, while Jesmond Care Home fashioned a seating area where the wildlife can be seen enjoying newly added bird feeders. Whitecraigs, winning ‘greatest community engagement’, called for the local community to join them in decorating their entrance area, with local school children joining to create a fairy garden for all visitors to enjoy.

Other entries included Edinburgh based Mathieson House, which had keen horticulturalists potting plants and planting seeds to enjoy later in the year, with plans for a competition between residents for the tallest sunflower, while Glasgow’s Rosepark Care Home beautified their balcony area with blossoming flowers.

While current restrictions continue to limit visitors and community activities, Renaissance Care’s competition has seen creativity and resident participation bloom in its homes.

Many of the residents have been teaching the staff and relatives a thing or two about keeping their gardens in tip-top shape. Aberdeen care home resident, Elsie Connell, aged 86, offered tips and tricks to help other budding gardeners get started.

Elsie said: “I have always loved gardening, so I was very excited to get my hands dirty with this competition. I would recommend regular weeding to keep your garden nice and tidy. When watering plants, make sure to aim for the soil rather than the leaves and flowers, as this can damage them when the sun hits. Finally, it’s important to always use good quality soil, with stones or rocks at the bottom of the pot to help with drainage.”

Kirstene Feenan, Marketing and Communications Manager, said: “At Renaissance Care, we always work hard to come up with creative activities that our residents will enjoy and benefit from. Each of the care homes have had great fun entering the competition, as well as learning and sharing new skills - the gardens have never looked more loved.

“We wanted to create the opportunity to reconnect with loved ones so we are so pleased to see this competition has enabled friends and family to enjoy some quality time with residents. Those who did not take part in the gardening have commented on how nice it has been to see happy people around the home once more.”