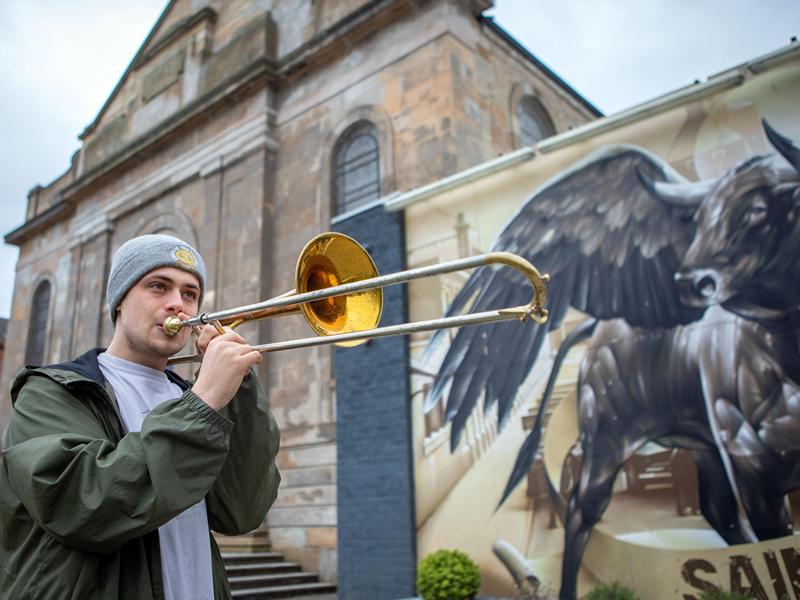 Stunning performances from Scottish musical talent across a spectrum of genres including jazz, blues, soul, funk, R&B, electronic and world music, will be available to enjoy as part of the summer festival. Saint Luke’s and The Blue Arrow Jazz Club will play host to a series of special virtual performances from homegrown and established jazz musicians. The four headline acts – Ryan Quigley’s Homeland Sextet, Fergus McCreadie Trio, Laura MacDonald Quartet and corto.alto – will also premiere a new piece of music specially commissioned by the festival at their shows.

The three-day event will open with the already announced Fergus McCreadie Trio, who released their acclaimed second album at the start of this year. Prime Trio, comprising of guitarist Kevin Mackenzie with former Young Scottish Jazz Musician of the Year, Peter Johnstone on organ and first-call drummer Doug Hough, will follow the opening concert.

The late night show will come from 2020’s Rising Star winner at the Scottish Jazz Awards, Anoushka Nanguy and her band the Noushy Quartet. The young trombonist teams up with guitarist James MacKay, drummer Peru Eizagirre and double-bassist Ewan Hastie. The Friday night will come to an electric close with a late-night DJ set from Rebecca Vasmant.

The Saturday night will start with the already announced Laura MacDonald Quartet, fronted by leading Scottish saxophonist and composer Laura MacDonald, who recently made it through to the final of BBC’s Masterchef. During the concert, the quartet will premiere a new upbeat commissioned piece reflecting on the pandemic entitled “We’re Ok”.

Animal Society will follow, led by Joe Williamson, guitarist and winner of the Young Scottish Jazz Musician of The Year 2018, who will present bold new music with four fellow musicians who are all at the forefront of the new wave of Scottish jazz. This exciting show will be full of joyful musical interplay and soaring improvisations. Glasgow collective corto.alto will then amaze audiences with a dose of their energetic hip-hop and soul inspired nu-jazz brilliance, led by trombonist Liam Shortall. The Saturday night will close with Nick Peacock, the legendary Glasgow DJ who was a pioneer on the cities club scene from the early 80s to today.

Sunday’s line-up will commence with a late afternoon show from the much sought-after singer Christine Bovill who will perform an intimate set of classic songs following on from her Best Vocalist nomination at last year’s Scottish Jazz Awards. Edinburgh based jazz singer-songwriter Georgia Cécile will perform with her band as part of this year’s digital festival. Shortlisted for Vocalist of the Year at the 2020 Jazz FM Awards, Georgia will perform with her band Euan Stevenson on piano, Mario Caribe on Double Bass, Max Popp on Drums and with a guest appearance from saxophonist Konrad Wiszniewski”

Bringing together London-based Scots performing from an exclusive London session will be Ryan Quigley’s Homeland Sextet. This brand-new band promises the highest quality music from some of the best jazz musicians in the country featuring Ryan Quigley on trumpet, Rachel Cohen on alto sax, Helena Kay on tenor sax, Malcolm Edmonstone on piano, Calum Gourlay on bass, Corrie Dick on drums plus special guest Luca Manning on vocals. The concert will showcase a new piece of specially commissioned music entitled “Song for JC” in memory of Edinburgh’s John Cumming who sadly passed away last year. John was a key figure in the London jazz scene for over 40 years and programmed the London Jazz Festival.

Next on our screens will be Mama Terra, which is a new musical collaboration between Scottish musician, composer and producer Marco Cafolla and critically acclaimed saxophonist Konrad Wiszniewski. Closing the final night will be Mark Robb, another pioneering Glasgow DJ and founder of the legendary Buff Club in Fitzroy Place, who along with Nick Peacock runs the regular Soul Jazz Sundays in Partick.

Alongside the virtual concerts, there will be extra bonus features available to view throughout the weekend. Seonaid Aitken hosts a series of Women in Jazz interviews featuring fellow Scottish musicians Laura MacDonald, Georgia Cecile, Rebecca Vasmant, Rachel Lightbody, kitti and Emma Smith with an honest discussion of their experiences as female jazz musicians in a male-dominated industry. There will also be some Pop-Up tunes each evening from special guests including an opening number on Friday night from Festival favourite and world-renowned guitarist Martin Taylor from his Scottish studio.

Early Bird Festival Passes are on sale now at www.jazzfest.co.uk. This All-Access ticket will give fans unlimited access to the full weekend of online entertainment for just £25 where they can watch over a dozen performances, DJ sets and much more from across the Scottish jazz scene. Early Bird Festival Passes will be available for a limited time only, after this the price will increase. Performances will be available to view on demand for seven days following broadcast. The festival takes place thanks to funding and support from Creative Scotland and EventScotland.

Jill Rodger, Director of Glasgow Jazz Festival, said: “The 35th edition of the Glasgow Jazz Festival will certainly not be how we imagined it when the festival began all of those years ago, but I am thrilled that we are still able to bring some of Scotland’s top talent to audiences this summer. We have such a thriving music scene here in Scotland and we feel it is vitally important that we continue to do all we can to help ensure its longevity during these difficult times. We would like to thank our funding partners Creative Scotland and EventScotland who have supported our plan to put on a festival that embraces and showcases Scotland’s culture whilst supporting both the artists and the supply chain that are pivotal in the continuing success of the sector.”

With Glasgow Jazz Festival audiences rising by almost a third in 2019 and a successful digital edition of the festival in 2020 alongside a string of winter and spring livestream shows taking place over the last year, jazz fans across Scotland and beyond are expected to enjoy this year’s digital programme.