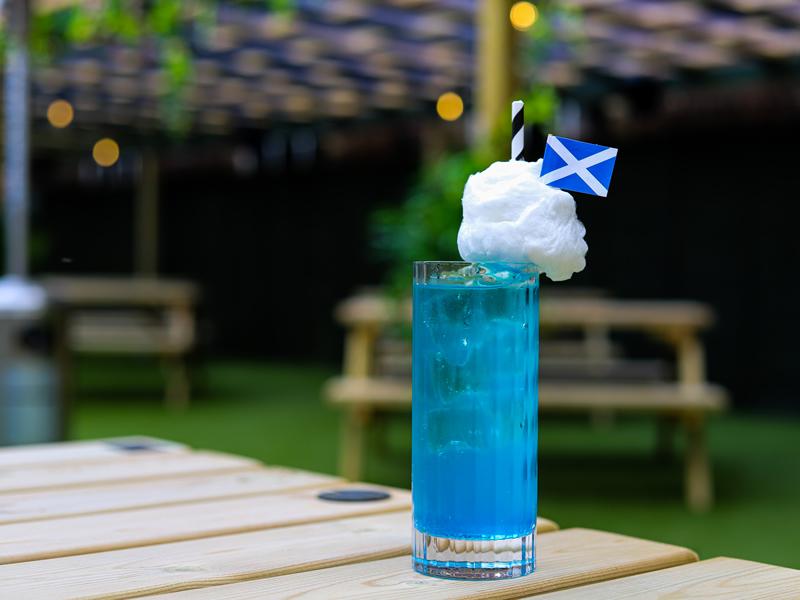 Fore Play Crazy Golf believes that life's happiest moments are found in the exceptional experiences we share with others. While they won't be showing the football, you can still join the fun and show your support for our national team by sipping on their ‘Yes sir, I can bogie' bevvie at the end of a round of crazy golf in their clubhouse bar, or sun-soaked cocktail garden.

The patriotic blue and white showstopper features blood orange gin, Blue Curacao liqueur, and is topped with white cotton candy clouds. The refreshing drink features on their new cocktail menu which is now available to enjoy.

Other quirky concoctions to try include a sweet Water(melon) Hazard - made with Midori liqueur and their blend of sweet and sour syrup, a tangy Sher-Putt Soor garnished with sherbet flying saucers, and a Long Irn Iced Tea, featuring the OG Irn Bru along with Vodka, Bacardi, Gin, Cointreau, Tequila and lime.

The Glasgow venue, which recently opened its stunning cocktail garden seating up to 100 people, is the perfect destination for having fun this summer. From sipping on their playful cocktails, enjoying street food from in-house vendor Loaded, to tackling their signature crazy golf courses, you’re guaranteed to leave happy after your time on and off the green.

Craig Neilson, Chief Greenkeeper at Fore Play Crazy Golf said: “It’s been a tough few months and we could not have come back swinging without our incredible customers and the support of the Glasgow community. We think it’s high time to celebrate the beginning of a much anticipated, very Scottish summer.
“We’ve gone all out with our new summer drinks, there’s something for everyone on there and it wouldn’t be complete without our homage to Scotland!”