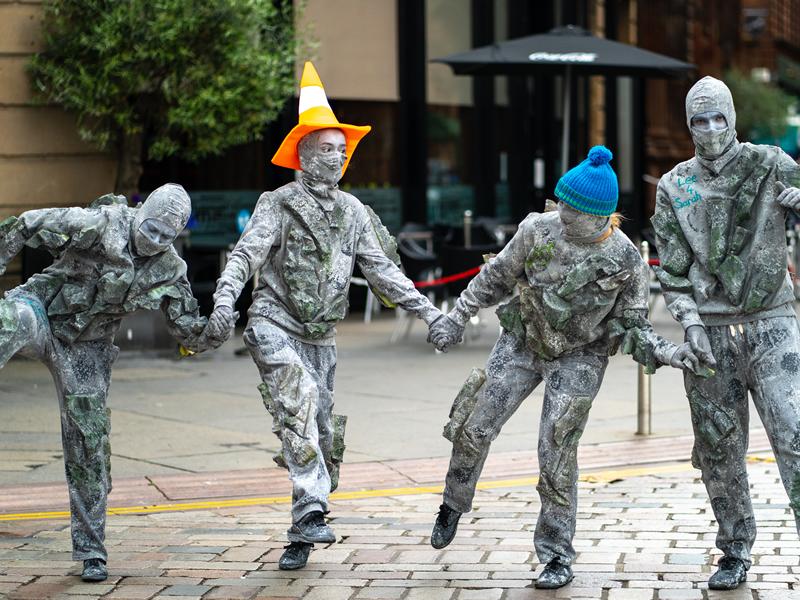 Although slightly different to previous years, the iconic Glasgow festival delivered by Glasgow Life – the charity that inspires people to lead richer and more active lives through culture and sport – put on a thriving programme of outdoor arts, circus, dance and more in a safe environment.

Limited tickets were available for a range of free fun-filled outdoor performances at George Square and Barrowland Park, with around 3,000 people in total enjoying the colour and excitement of the festival in the streets and venues in and around Merchant City from Thursday to Sunday.

The Carnival Party kicked the festival off in style on Thursday, with striking artwork installations, stilt walkers and dancers dotted around the streets of Merchant City celebrating Baroque Venetian carnival traditions.

The festival then took over the heart of the city from Friday onwards, bringing excitement to George Square with dynamic dance and circus performances including Swings (All or Nothing Aerial), which saw aerialists take to giant swings before the public were able to have a go and experience the accompanying immersive soundscape.

World-class company Motionhouse showcased their incredible show Wild – a bold tour de force dance-circus performance exploring our relationship with the natural environment. A poetic mix of dance and acrobatics also took place at the civic heart of the city with Catch Me (Upswing).

Meanwhile, Surge Festival took over Barrowland Park on Saturday and Sunday to showcase wacky cabaret performances and put on wonderful interactive activities for the whole family.

Walkabout in Merchant City saw amazing acts The Fizzicals (Mischief La Bas), Kayos and Findhorn performing around Merchant Square and the surrounding streets across the weekend.

Meanwhile, Walking Tour – In the City Still took place on Saturday 10 and Sunday 11, with Feathers Ensemble using music, movement and projections to take the audience on a thought-provoking journey.

Merchant City Festival had local businesses including bars, restaurants and retailers at its heart. Scottish restaurant Mharsanta brought the carnival vibe inside with a spectacular window display while Merchant Square was home to several pop-up events, allowing attendees to support their favourite hospitality venue while enjoying some festival fun.

Councillor David McDonald, Chair of Glasgow Life and Deputy Leader of Glasgow City Council, said: “It’s been absolutely brilliant to see live entertainment making a return to the city. The festival was such a rich cultural experience and there really was something for everyone.

“I’m delighted that the festival brought a boost to the amazing hospitality venues in Merchant City. The area is known for its incredible cafés, bars and restaurants and we’re thrilled that festival-goers got behind local businesses while enjoying the festivities.”

“Merchant City Festival celebrated the best outdoor cultural performances that Scotland has to offer and it was incredibly special to see so many talented individuals in the creative sector return to what they do best as part of the festival’s unforgettable return.”

Paul Bush OBE, VisitScotland Director of Events, said: “Events play an important role in our communities by providing us with great entertainment as well as bringing social and economic change so it is great to see live events starting to take place as restrictions continue to ease.

“EventScotland was delighted to support the return of this year’s Merchant City Festival through Scotland’s Events Recovery Fund, which has been supporting the events industry to respond and adapt to the effects of the pandemic.”

The 2021 festival was slightly different to previous years due to COVID restrictions and did not feature markets, food trucks or live music stages.