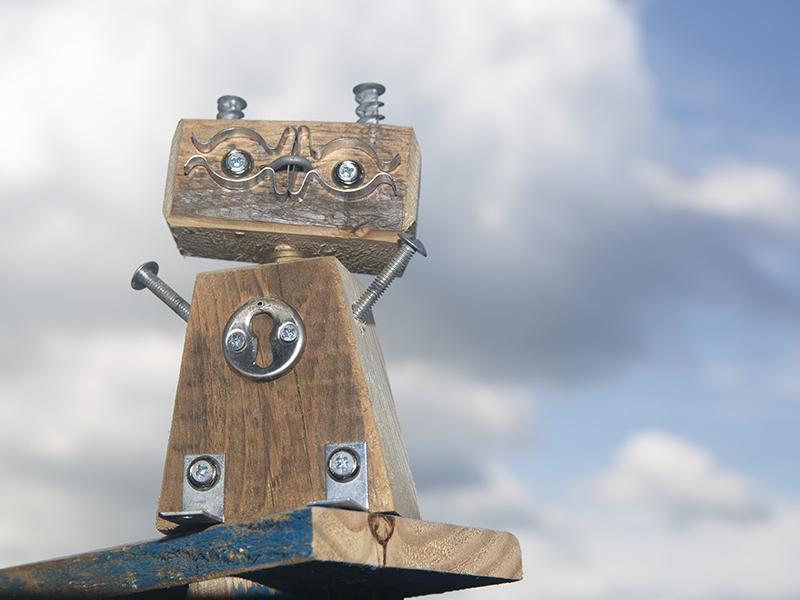 Glasgow residents have been taking to social media to discover the meaning behind the robots which mysteriously appeared in the city overnight. The robots, each one handcrafted from wood and standing at around 12” tall, were hidden in and around Glasgow’s city centre for eagle-eyed residents to find. And now the secret is out as the artists behind the robot takeover are revealed.

The robots are the work of two artists from The Clydeside Collective which launched at Glasgow’s St Enoch Centre on Wednesday 14th July. The Clydeside Collective brings together creatives of every kind who each share a passion to reuse, recycle, reclaim, and resell items that may otherwise have been destined for landfill. In keeping with the collective’s ethos, the artists created a series of 50 robot sculptures – each lovingly reimagined and handcrafted from old wooden fixings – and hid them throughout the city centre.

Locals lucky enough to find one are being asked to take a photo and tag The Clydeside Collective on Facebook or Instagram for a chance to win a prize in addition to their unique piece of robotic artwork.

The robot takeover is the brainchild of Sara Thomson who began spearheading her campaign for sustainability at The Leith Collective, which opened in Edinburgh’s Ocean Terminal in 2019 and since earned the title of the UK’s first ever single-use plastic-free shop of its kind.

Like its east-side sister shop, it is hoped The Clydeside Collective will provide a platform for established and emerging eco-friendly artists and deliver valuable support through their business mentorship programme. The venue will also play host to a range of inspiring events and workshops, designed to boost the local community.

Commenting on the inspiration behind the robots, Sara explained; ‘Our resident artists are unbelievably talented when it comes to envisioning new uses for old items. We hope these reimagined robots capture the attention of Glasgow locals and help to raise awareness of the importance of reprogramming our throwaway mentality’.

Glasgow treasures reopen to the public

Two of Glasgow's best-loved properties, which give a glimpse of Glaswegian life through the ages, are re-opening to the public!

The SEC Armadillo have announced that the legendary Gary: Tank Commander is back by popular demand to entertain the troops in this year's wish-filled family pantomime, Aladdin!

Loved Glasgow visitor attraction set to reopen to the public

The final preparations are being made to reopen the People's Palace to the public from Wednesday 30th June!

Fun for the whole family at Glasgow Green Fan Zone

As schools finish up for summer holidays, the UEFA EURO 2020 Fan Zone at Glasgow Green has a host of free activities to keep the whole family entertained until 11th July!

Conservation charity the National Trust for Scotland and whisky brand The Glenlivet – two organisations with a long history – have joined forces for a special online event on 1 July.